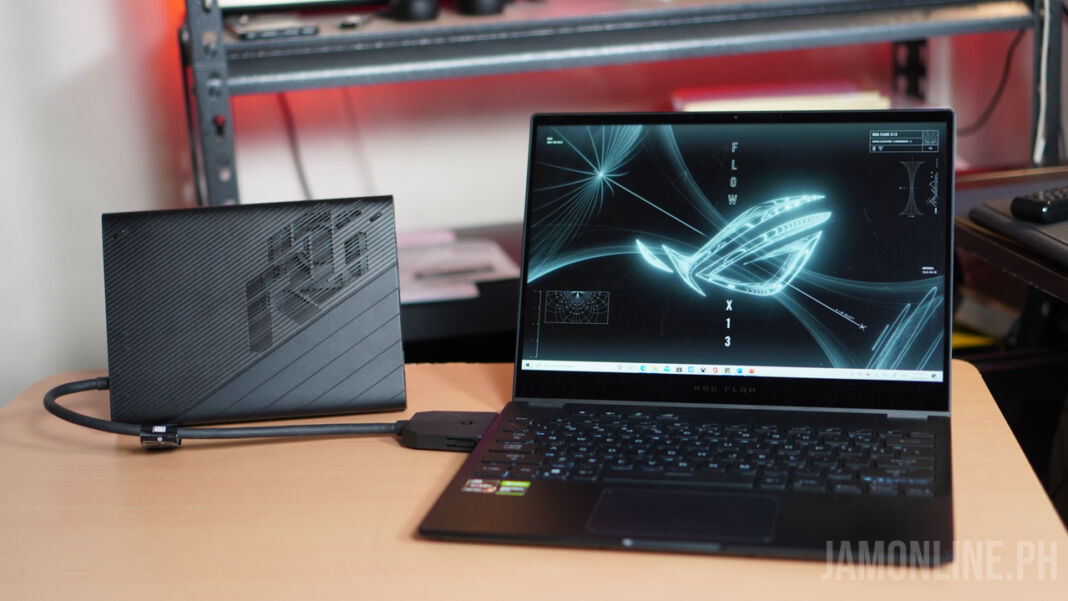 ASUS Philippines has finally launched one of the most exciting gaming laptop this year — the ASUS ROG Flow X13. It’s a gaming laptop and yet they managed to bring in a powerful hardware inside including an AMD Ryzen 5000 CPU inside and also a GeForce GTX 1650 GPU inside and for demanding games, you can go up to RTX 3080 with the ROG XG Mobile external GPU. This gaming is different from the others as this one sports an ultraportable design with its thin and light form factor and also the convertible design. With its 15.8mm thickness and lightweight design at 1.3kg, this makes the notebook not only fitting for gamers but also for those people who are looking for a notebook that they want to use both at office and at gaming, this one is for you. Despite lacking a Thunderbolt port which is only present on Intel notebooks, the ASUS ROG Flow X13 still managed to handle an external GPU with a port meant for the notebook only and it’s called the ROG XG Mobile. If you’re worried about the cooling, the ASUS ROG Flow X13 comes with a liquid metal thermal compound which improves the overall thermals of the notebook. This is combined with a Dual Arc Flow fans, you can have a better airflow and also a minimal noise. As for the display, the ASUS ROG Flow X13, this one comes with 4K Ultra HD display with a 60Hz refresh rate. It comes with a 16:10 aspect ratio and also a factory-calibrated PANTONE validation for the color accuracy.

The ASUS ROG Flow X13 comes in Supernova edition which gives you a specialized metal nameplate with iridescent shine with ultraviolet shade. This one is powered by a more powerful Ryzen 9 5980HS processor and an up to RTX 3080 GPU thanks to the ROG XG Mobile The ASUS ROG Flow X13 comes in different variants. Here are the prices and variants of the ROG Flow X13:

You can also purchase the ROG XG Mobile in the Philippines so you can have a more powerful GPU for your notebook: