The ASUS ROG GL704 has been in the market for a while now and it is a 17-inch gaming notebook from ASUS that features a more solid and more minimalist design than its predecessors. Recently, ASUS has updated the laptop last CES 2019 at Las Vegas. Surprisingly, the company didn’t unveil a new design or a new generation to the notebook. Nonetheless, it was updated due to the upgrade of Nvidia to the RTX series which is the new generation of graphics cards. 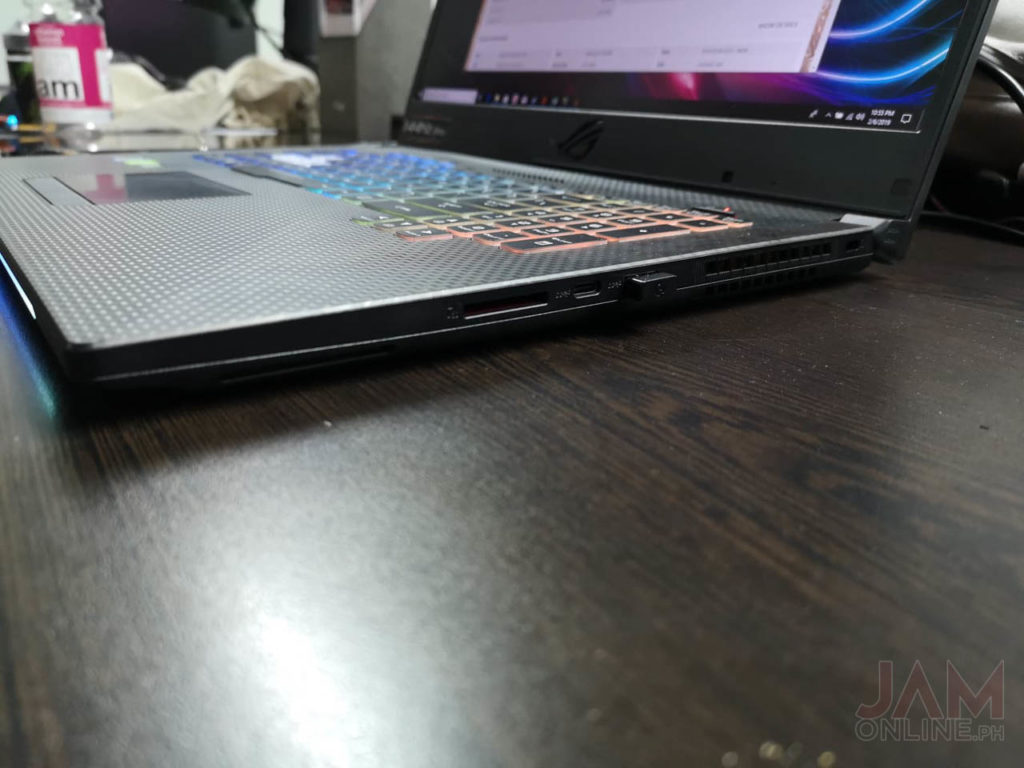 One of the few things that we love on the ASUS ROG Strix GL704 Scar II over the previous generation is the introduction of a smaller bezel. This means that the notebook is using fewer footprints compared to the predecessor and it manages to be more compact and more portable than ever. However, the webcam of the notebook has been compromised as it is now placed below the display of the notebook. Speaking of display, the laptop features a 144Hz refresh rate with 3ms response time. And yes, we do have great colors and viewing angles on the ASUS ROG Strix GL704 Scar II. For a 17-inch notebook, the ASUS ROG Strix GL704 Scar II was just fine as it has a 2.9kg of weight and has a thickness of 26.4mm. The top lid of the notebook still features the brushed metal finish with half cut design which represents a more minimalistic approach to gaming design and then there’s the ASUS ROG logo at the side of the notebook that lights up in RGB. Inside, the SCAR II edition of this notebook features a more tactical design approach with a carbon fiber texture and camo design. This definitely represents that the gaming notebook is really serious when it comes to a shooter or FPS games. Despite the more minimal bezel of the notebook, the ASUS ROG Strix GL704 Scar II does have a full-size keyboard and typing on it was really comfortable but not the best one. It will definitely do well when it comes to typing on your office document or when you’re playing. Oh and have I told you that the ASUS ROG Strix GL704 Scar II does come with ASUS AuraSync technology that allows you to sync with other ASUS Aura-Sync compatible devices and yes, we still have the light bar on the front which adds beauty to the notebook.

When it comes to I/O, the ASUS ROG GL704 Scar II does impress us as it comes with all of the ports that we need. On one side, we got the headphone jack, 3x USB 3.1 ports, HDMI, mini DisplayPort, LAN port, and DC Power jack. While on the other side, we got the SD card slot, USB 3.1 Gen2 Type-C, USB 3.1 and Kensington lock.

While we do have a short time of using the ASUS ROG Strix GL704 Scar II, we were able to try out Time Spy on the notebook and we got a score if 7116 as seen below. For now, that’s all we have and hopefully, we can review this notebook soon. So far, we did like our first impressions on the notebook. We got a more minimal footprint and the RTX 2070 is really damn powerful.