Tablets are not yet dead. Despite the availability of large smartphones such as the Samsung Galaxy Note9 that offers a large 6.4-inch display and offers S-Pen, we still see tablets everywhere. Actually here in the Philippines, we still have some mid-range tablets like the one that we’re reviewing today, the Samsung Galaxy Tab A 10.5. Check out our review of the tablet below 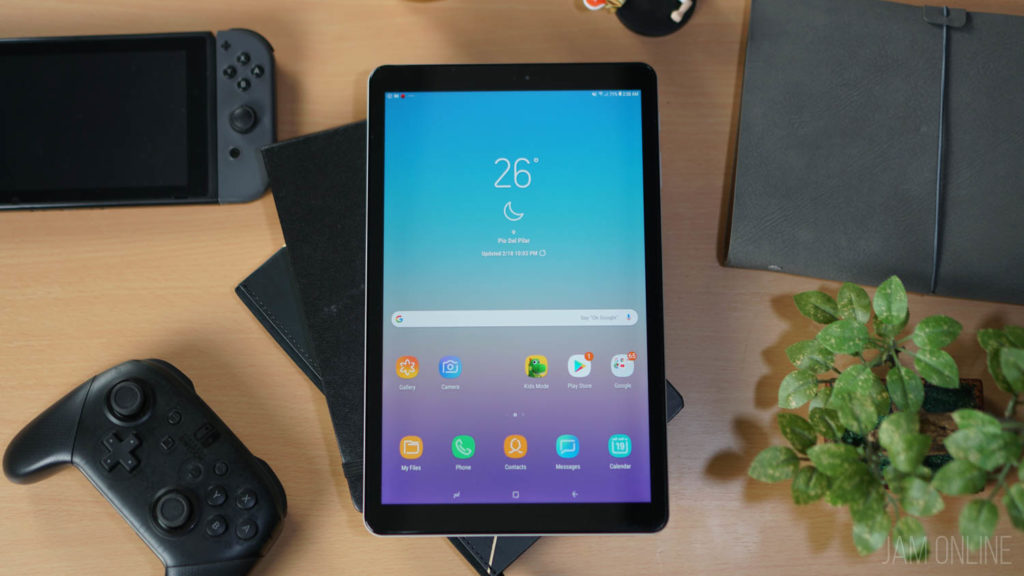 When it comes to ports, the Samsung Galaxy Tab A 10.5 got everything that we need on a tablet, it features a USB-C port that supports fast charging and then there are the quad speakers with Dolby Atmos surround sound and yes, it was crisp and clear which is perfect for movies and videos but I couldn’t say that this is the best one that I’ve seen on a tablet. The tablet also comes with a headphone jack in case you want to use earphones or external speakers. The smartphone doesn’t come with Bixby button but the power button and the volume rocker is placed on one of its side and on landscape mode, we got a larger bezel on the sides which makes the tablet easier to hold when watching videos on YouTube or Netflix. But the placement of the selfie camera and, buttons, and the rear camera is made for portrait usage. Nonetheless, these placements don’t really affect how I use the Samsung Galaxy Tab A 10.5 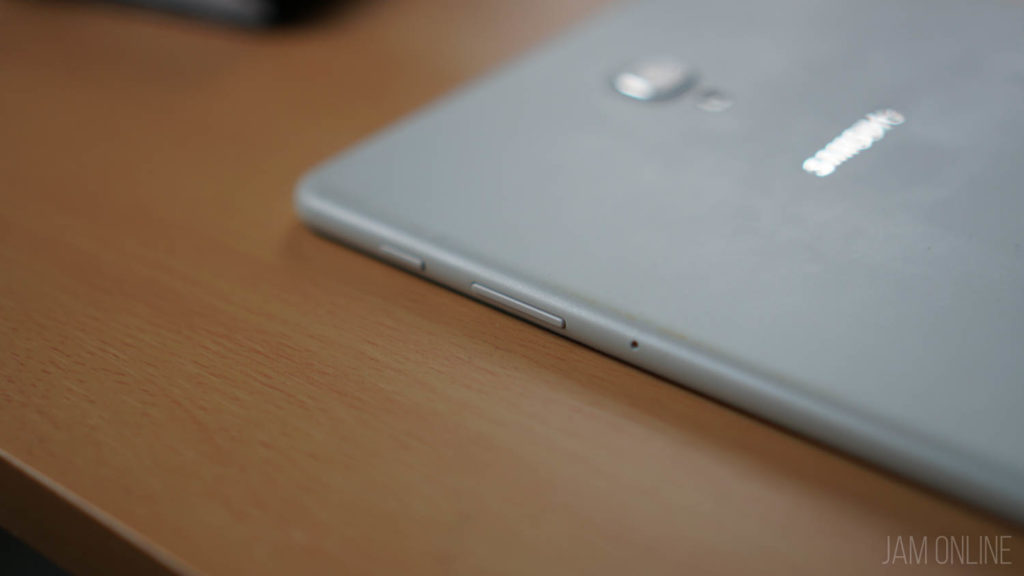 Another welcome addition to the Samsung Galaxy Tab A 10.5 is the cellular data functionality. There’s the single sim card tray and also the MicroSD card slot on one tray and yes, you can send messages and even make calls on this tablet. However, I strongly suggest that you only use this tablet for browsing the web as using this as your main phone might be awkward since this is a giant tablet. The Samsung Galaxy Tab A 10.5 features a 5-megapixel front facing camera and then there’s the 8-megapixel rear camera with AF. When it comes to camera quality, I’ll still suggest getting a smartphone for that but the smartphone’s camera will be just fine if you’re gonna use it for video calls. 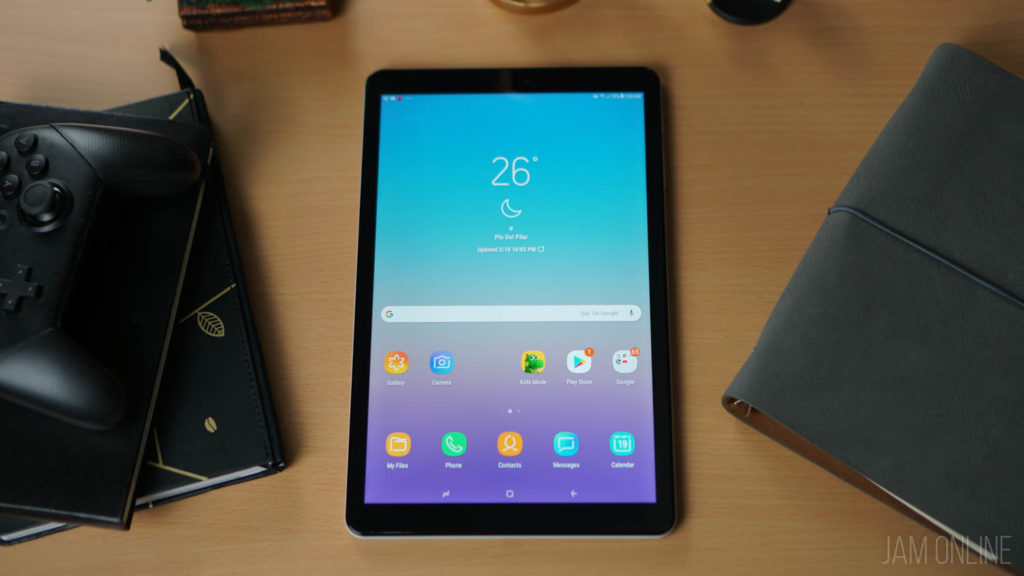 When it comes to battery life, the Samsung Galaxy Tab A 10.5 is quite decent as it can reach up to 11 hours of 33 minutes on PC Mark which is long and perfect for media purposes. 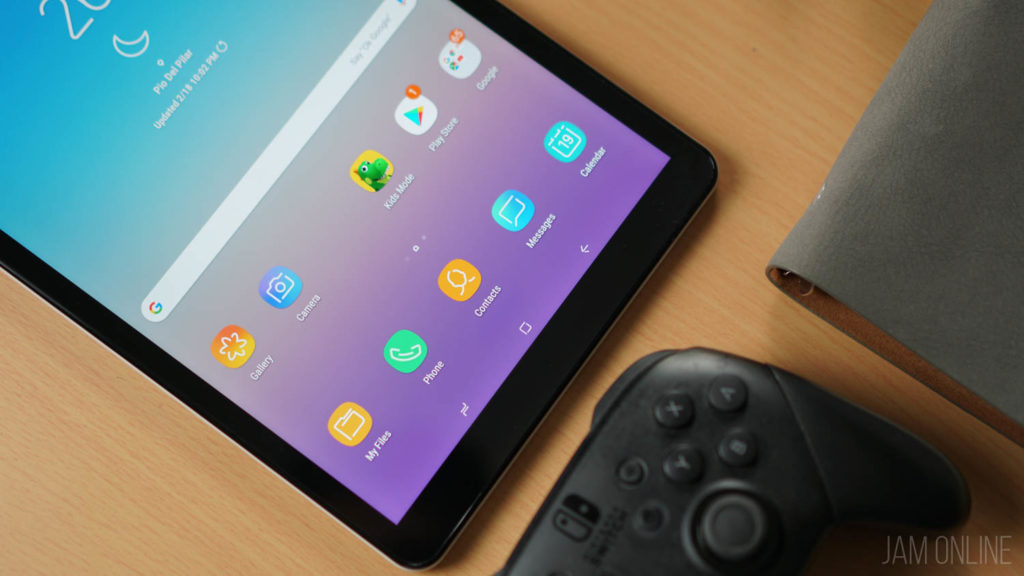 When it comes to display quality, the Samsung Galaxy Tab A 10.5 wasn’t the best one in its class despite having a WUXGA resolution because of its use of TFT instead of Super AMOLED display which is way more colorful than the former. Nonetheless, it’s still big enough for playing games and also watching movies on Netflix. The Samsung Galaxy Tab A 10.5 is running on Android Oreo with a UI that is more optimized for tablets. Well, it does look like a giant phone (Actually, you can use the Galaxy Tab A 10.5 as a phone). It does come with some features and apps that are exclusive to Samsung but nothing really special about it. 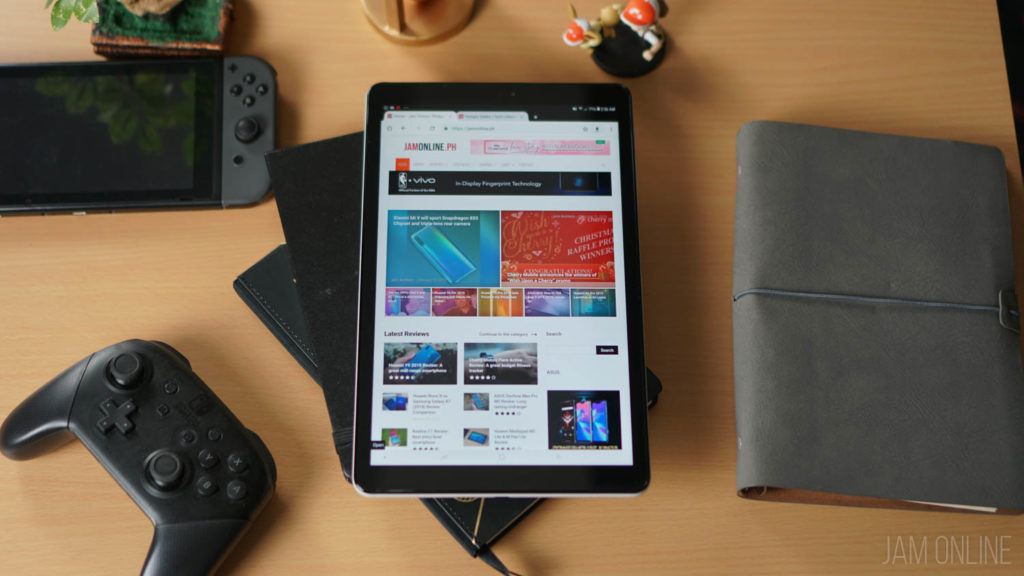 The Samsung Galaxy Tab A 10.5 features a Snapdragon 450 chipset which is available in the market for a while now and then there’s the 3GB RAM. Well, the performance of the tablet will be just fine if you’re just into watching videos on YouTube and streaming Netflix. Of course, you could still do Ragnarok M: Eternal love on this one but don’t expect too much on heavier games on this one as the Snapdragon 450 chipset is won’t be as powerful as most tablets.

If you want to know more about the performance of the tablet, here are the benchmark scores that we got on the Samsung Galaxy Tab A 10.5 The Samsung Galaxy Tab A 10.5 isn’t the most powerful tablet in the market but this tablet will be just fine if you’re into watching Netflix and doing some casual stuff. I like the battery life on this tablet and the quad-speakers of the tablet is good especially when you’re watching movies or videos but it isn’t the best one. The multi-window on its 16:10 display was also good as I can have better viewing on that one. However, the Samsung Galaxy Tab A 10.5 is still using a Snapdragon 450 which doesn’t really shine in performance but it will be enough for basic app usage and some casual games including Ragnarok M. While we do like the aspect ratio, we find the display quality a little bit lacking to me.