The Vivo V15 Pro was recently launched in the Philippines and they got powerful and interesting hardware on this smartphone because this mid-range smartphone now features the things that we love on the Vivo NEX smartphone which are the Ultra FullView display and also the pop-up selfie camera. The Vivo V15 Pro has a familiar design since we’re getting the ergonomics of the V series and also the look of the NEX series smartphones as we got a glossy design with a pattern that reflects at the back that looks really elegant despite its build made of plastic. On the right of the smartphone is where you can find the volume rocker and also the power button while on the other side, the Vivo V15 Pro has a dedicated button on the side that can launch Google Assistant which is a big deal to me as I don’t have to press and hold the home button anymore as I do a lot of searching on the smartphone Despite being a “Pro” variant, the Vivo V15 Pro didn’t lose the headphone jack and then there’s the dual sim card tray which can below located below and it is separate from the microSD card tray which can be found on the upper part of the special button. However, my gripe with this smartphone is that the Vivo V15 Pro is still using a Micro USB port. For a 2019 smartphone at more than Php20,000, this is not acceptable already. 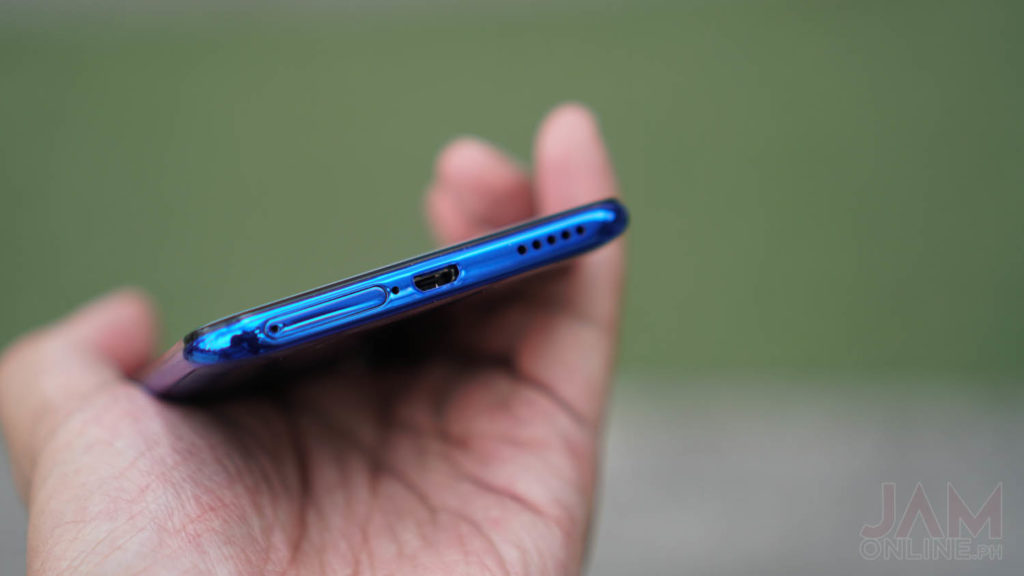 Noticeably, the Vivo V15 Pro loses its fingerprint scanner at the back due to the usage of the in-display fingerprint scanner which was seen on the Vivo X21UD that we’ve reviewed before. Thankfully, technology has definitely improved over the previous generation and my fingerprints can be scanned faster and better compared to the last generation. Even with a light touch, the smartphone can be easily unlocked. One of the things that we loved on the Vivo V15 Pro is we got a long battery life thanks to the 3700mAh battery inside it and in our PC Mark Battery Life benchmark log, we got a score of 9 hours and 12 minutes which is pretty great for a smartphone like this. In my usage, I always get a day of use without asking for more juice.

Vivid display with no notch 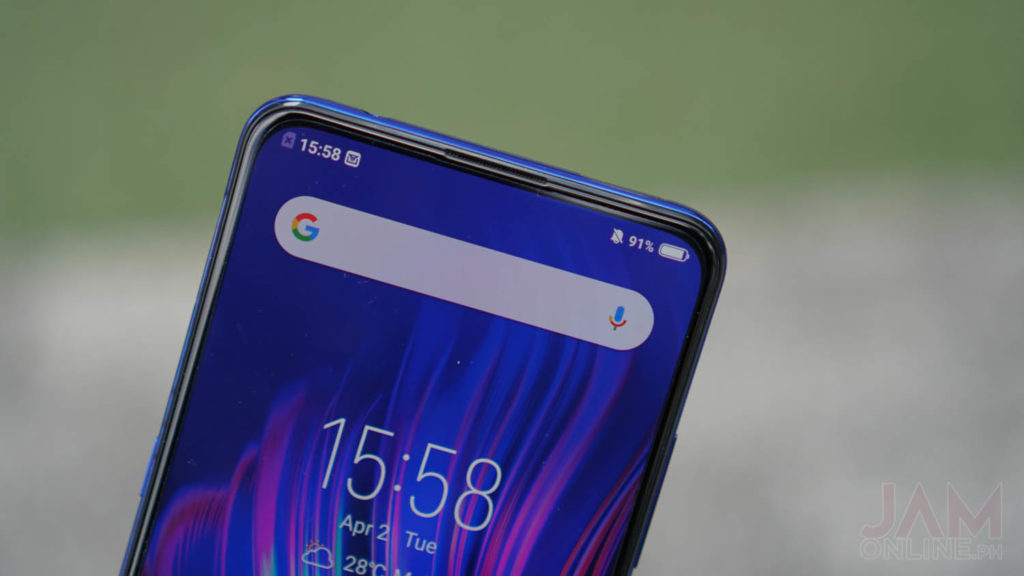 Yep, the Vivo V15 Pro managed to lose the notch on this smartphone just like the Vivo NEX smartphone. There’s a Full HD+ display in the 6.39-inch Ultra FullView Display. Basically, the smartphone doesn’t sport a notch. The display is actually quite nice as the colours were really good thanks to the Super AMOLED panel. There are the deep blacks and vivid colours with this display and the smartphone are actually bright enough to be used outside.

The Vivo V15 Pro still uses the FunTouch OS which means that the software of the smartphone is heavily customized. There’s FunTouch OS 9 based on Android 9 Pie and navigating on this one is smooth and yes, there’s no app drawer by default but this one is definitely user-friendly. But of course, there is still some bloatware that comes with the smartphone and some of you might not use it but don’t worry because the smartphone does come with a 128GB storage so you don’t have to worry about losing memory on these applications. 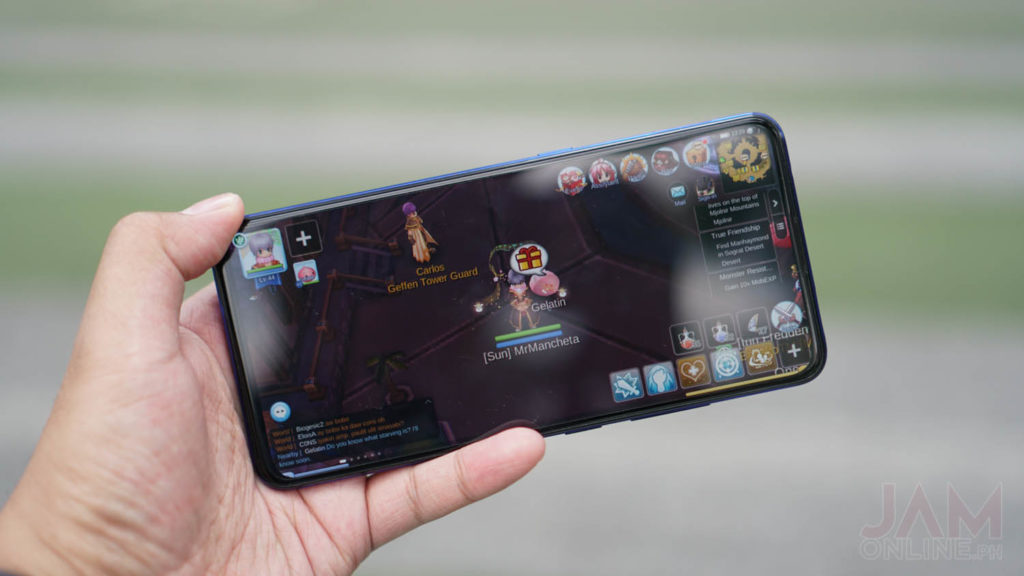 Gaming on the smartphone is a breeze. We tried different games on the Vivo V15 Pro and we’re pretty amazed at the performance of the smartphone. We ran demanding games like PUBG Mobile, NBA 2k19 and AxE and the Vivo V15 Pro didn’t have any problem running on these games. Not only that, but the Vivo V15 Pro also comes with the Game Cube application that lets you help you customize the settings for notifications and other things that might affect your gaming.

Unfortunately, we were not able to run the games on Gamebench but in NBA 2k19, we’ve set it up to ultra high settings and we didn’t see a problem with it and it was running really smooth. Even in Talion, the smartphone was able to run it at medium settings considering that the smartphone is really heavy on the GPU and CPU. The Vivo V15 Pro’s biggest feature aside from the display is the camera. We got a 48MP triple rear lens camera with of it, an ultra-wide angle lens and then there’s the 32MP pop-up selfie camera and surprisingly, the cameras of the Vivo V15 Pro performed really great. For a premium midrange smartphone, the Vivo V15 Pro is a really great smartphone and I would highly recommend this one unless if you’re not a fan of mechanized elevating selfie camera and its thick and plastic build. But if you’re looking for a decent mid-range smartphone that comes with a really good camera and also a decent performance then you might want to look at this one, the Vivo V15 Pro. It’s also a good thing that Vivo has opted for the 8GB/128GB variant in the Philippines for a larger memory being demanded by power users. The Vivo V15 Pro will be available for Php23,999 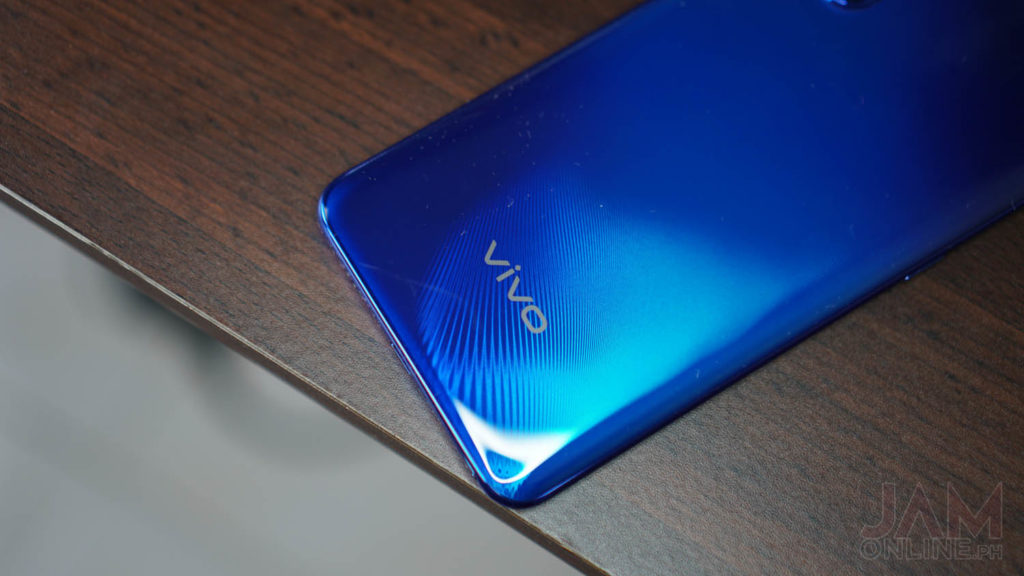