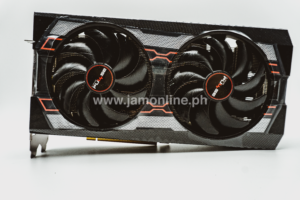 The Sapphire RX 7500 XT Pulse is a combination of a custom-designed PCB with a similar VRM to the reference card designs. The Radeon RX 5700 XT is part of AMD’s Navi performance-segment of graphics card since the RX Vega series The architecture is based on the 7nm silicon fabrication process that AMD calls the RDNA compute units.

The Sapphire Pulse RX 5700XT comes in a vertically designed red, white and black box. There are no hints of what the graphics card looks like on either side of it. Taking a glance at the card itself, we see the Pulse branding all over it and looks similar to the 5600 XT version with a few variations. It has a minimalistic gamer approach without all the RGB. The dual fans form part of the ‘Dual-X’ cooler, and measures 95mm across on each. RMAs made significantly easy by Sapphire with the Quick Connect support which means that each fan can be individually removed by just taking out one screw.

The heat pipes are exposed on both sides of the graphics card and are slightly bigger than the PCIe bracket.

On the front, there is an LED-lit Sapphire logo on the video card. Just above that is a tiny dual-BIOS Switch. By default, the cards are on Performance BIOS and may be switched to a Silent BIOS depending on preference.

Checking the backplate, it is mostly black with a stripe of gray and red accents. It is mainly metal with a few holes and cut-outs for extra breathing room from the rear.

The Sapphire RX 5700 XT requires 1 set of 8-pin and another set of 6-pin PCIe power connectors.

Basing the on the performance, the Sapphire RX 5700 XT with its latest drivers slightly outperformed the ASUS GeForce RTX 2070 of a Full HD resolution test.

With Final Fantasy XV, the  Sapphire RX 5700 XT shows a 3% performance gap over the ASUS RTX 2070 on the  average FPS and almost a 4% advantage on the minimum FPS.

Rise of the Tomb Raider gives us an idea of what performance the Sapphire RX 5700 XT gives under heavy loads of rendering. At 1080P it shows great promise and performance is close to that of an RTX 2070.

Metro: Last Light Redux shows a close to 1% performance disadvantage compared to the ASUS RTX 2070 Mini on both the average and minimum FPS.

Lastly, the Horizon Zero Dawn which is optimized for AMD Radeon cards, the Sapphire RX 5700 XT Pulse 8GB shows a 12% rise of FPS versus ASUS’ RTX 2070 Mini OC Edition on the average FPS while on the minimum FPS, it was a close match.

Huawei Matebook 14 2020 Launches in the Philippines