A few months ago, OPPO isn’t really that popular in the western market but recently, they’ve showcased the OPPO Find X to the world and everyone was amazed at its sexy design and also in its display. It might not be the first smartphone to have a sliding camera but it does have a better and sexier application. Check out our review below to know more about the smartphone. The first thing that will come into your mind once you hold the OPPO Find X is a beauty. Yes. The smartphone is not just elegant but it has the sexiest design on a smartphone right now. Why did I say that? Well, just look at the build of the smartphone. The OPPO Find X is glass all throughout and it’s really premium to hold. Unlike the other OPPO smartphone, the OPPO Find X only features a USB Type-C and there’s no headphone jack in sight but thankfully, OPPO has decided to include a dongle on the box for that one. The interesting part about the OPPO Find X is its sim card tray actually looks like a single sim card slot but actually, you place a nano sim card slot on one side and another one on the other side. Yup, that cool. The speaker is placed on the side of the USB Type-C and it was loud enough whether you want to play music in your room, watch videos on YouTube, or even when you’re playing games. However, I would still go for earphones when playing games like PUBG Mobile. Again, the OPPO Find X does have a really cool design and build. It’s very comfortable to the hands and the sliding camera is awesome however you’ll be limited with the case and the included case of the OPPO Find X will not cover the camera part of the smartphone. It’s the first time that OPPO has used a curved display on their smartphone. There’s a 6.4-inch AMOLED display on the OPPO Find X with a Full HD+ resolution and of course, a Gorilla Glass 5 protection. OPPO calls the smartphone’s display as Panoramic Arc Screen and my God, the screen-to-body ratio of 93.8% is majestic, massive, and really impressive. The color of the display was really vivid and there were rich and deep blacks on this one. Since we’re getting a 19.5:9 display aspect, the display is perfect for split-screen and also for gaming on landscape mode. However, since there were no bezels on this smartphone, I tend to accidentally touch some buttons when playing PUBG Mobile but damn, the smartphone’s display is really immersive. One of the coolest things about the OPPO Find X is the panoramic light color that illuminates on the sides of the display to notify that there’s someone calling you or a notification. Really cool and useful feature if you ask me. The OPPO Find X features a 3730mAh battery inside which is a just enough for a smartphone at its size and in our usage, we were able to use the smartphone for a whole day of use without asking for more juice however in our PC Mark test, we were only able to get a score of 7 hours and 38 minutes but again, our real-life usage of the OPPO Find X was better than that.

The OPPO Find X is still powered by the same ColorOS that we can find on other OPPO smartphones. It’s ColorOS 5.1 on Android 8.1 Oreo and the interface of the smartphone is very user-friendly and pleasing to the eye thanks to its colors and the smooth transitions of the UI. 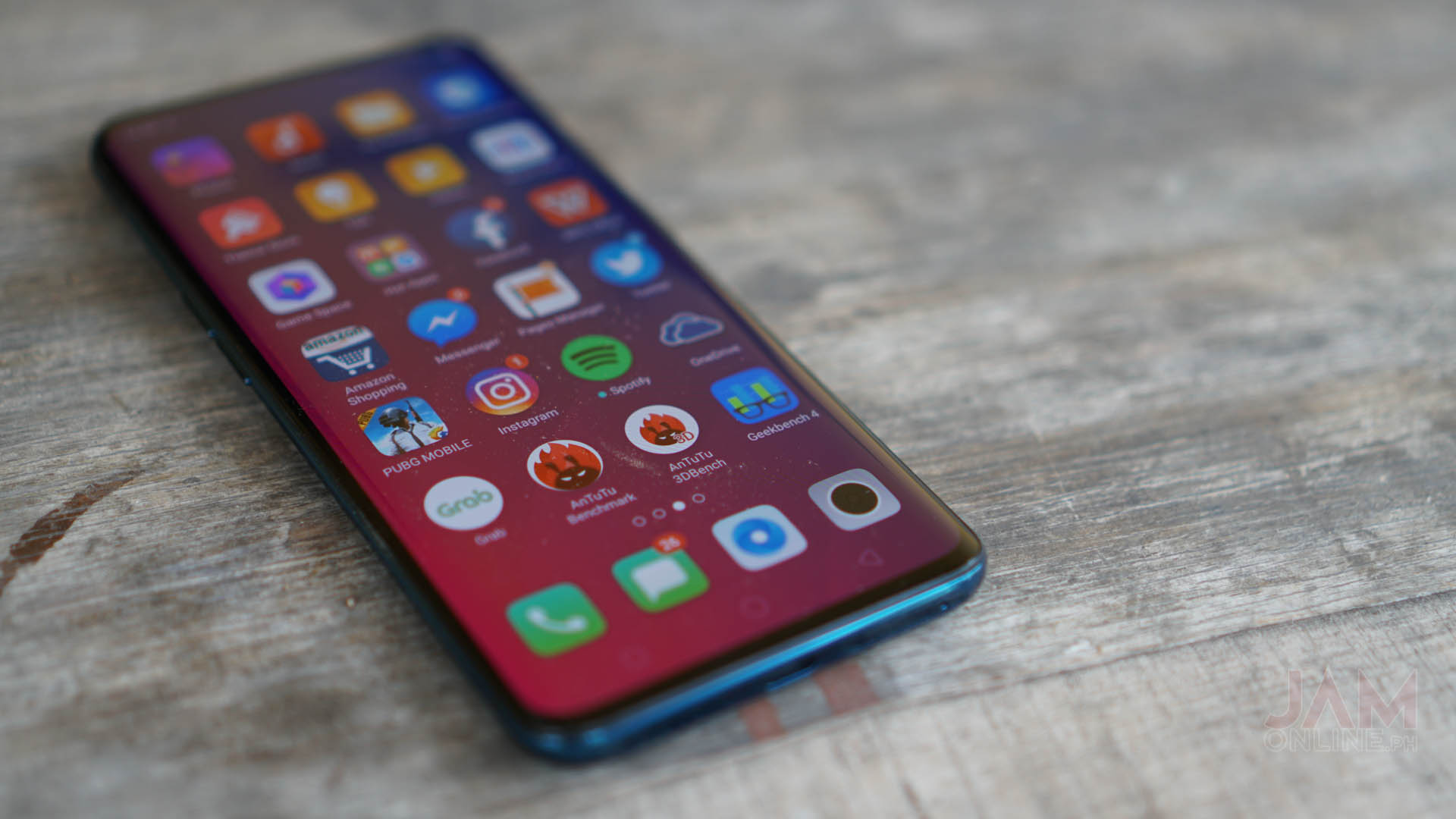 The smartphone’s storage is at 256GB and damn, I don’t think you would need any more storage than that unless you save a whole lot of media files on your smartphone. There’s a generous 8GB of RAM too which is the highest on most smartphones these days.

Since we’re getting a Qualcomm Snapdragon 845 processor along with Adreno 630 GPU and 8GB of RAM then you already know base on the specifications that the smartphone can run almost everything in it. In our benchmark, the OPPO Find X just dominated all of the benchmarks apps that we used. Check out the benchmark applications that we’ve used for the OPPO Find X.

When it comes to gaming, everything was silky smooth whatever game that you’re running in it and thanks to OPPO Game Space, there’s a little bit of optimization that is going on the smartphone. Here are our Gamebench scores that we got from the OPPO Find X. Every game that you’ll put in this smartphone will probably run well thanks to its powerful hardware inside. I really had no problems with any games since most games runs really well on the Snapdragon platform. It’s cool and it’s unique however there are moving parts on this one which may cause breakage in the future. But in my usage, I was pretty happy with the OPPO Find X as the sliding mechanism does feel solid even after hundreds of times of use. You don’t have to worry about the smartphone accidentally sliding out in your pocket as this one has a fail-safe. In case there’s an object or force blocking the sliding mechanism of the camera then the smartphone’s camera will automatically not open. The front-facing camera and its sensors are one of the unique features that you can find on the OPPO Find X as it features sensors that can scan and detect your face securely. Face Unlock was really good on this smartphone because it was fast and it works well even without lighting. So yeah, the lack of fingerprint scanner is a no biggie for me.

But of course, these front-facing sensors are not just used for face unlock, they’re also used for other features like Omoji and better face scanning for better AI photos. Actually, here are some of the selfies that I took using the OPPO Find X.

When it comes to video, the smartphone can record 1080p 30fps on the front facing camera and 4K 30fps on the rear camera. Again, it’s not the best one but it was pretty acceptable on a flagship smartphone like this one. Without a doubt, the OPPO Find X is the sexiest smartphone in the world right now. It has the right curves that not only fits the hand but also really pleasing to the eye. The gleaming gradient colors on the glass build of the smartphone is unique too and it’s emphasizing its elegance and being a premium flagship smartphone. 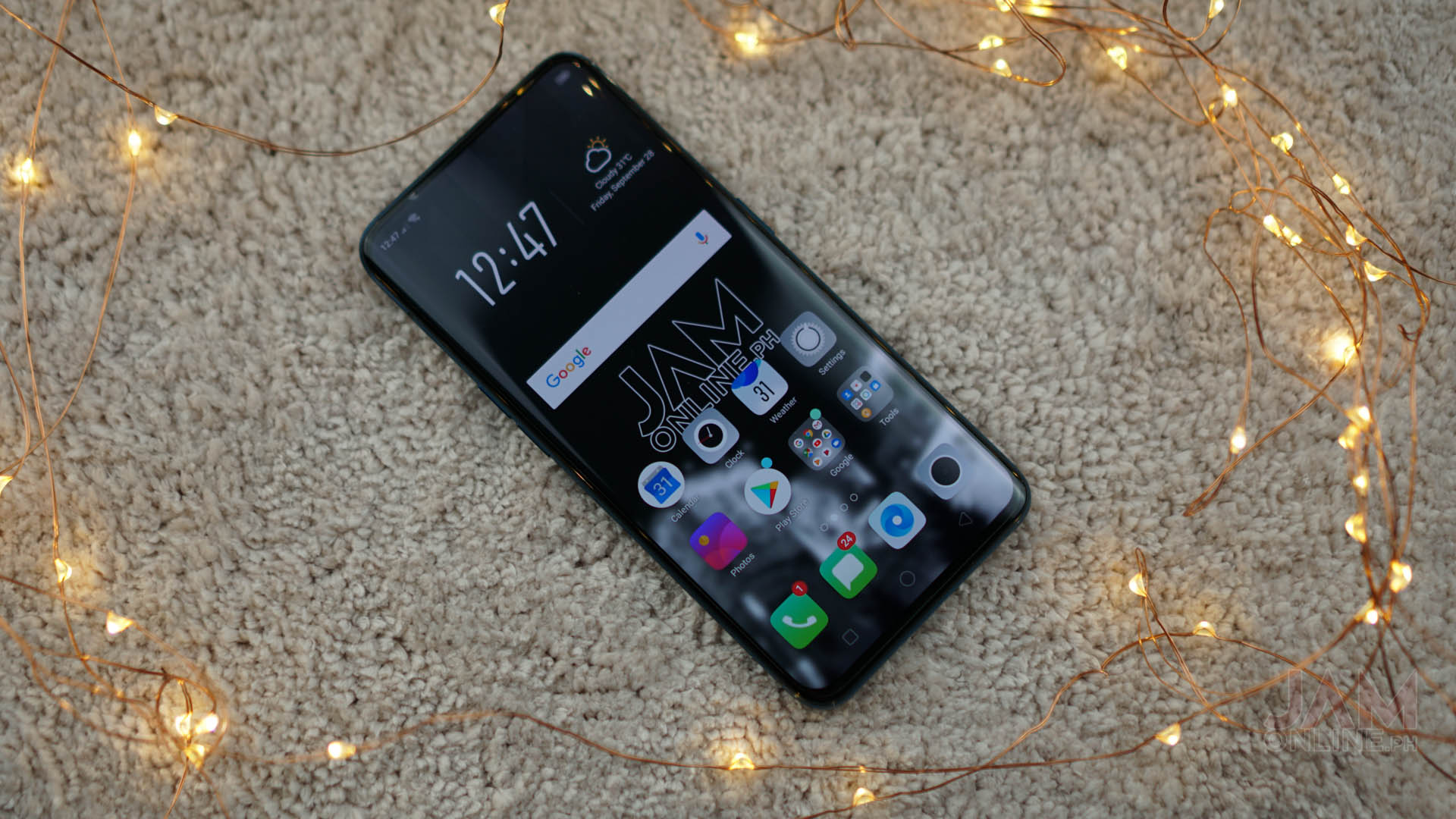 But of course, the smartphone’s design isn’t its only strength as this one is powered by a Qualcomm Snapdragon 845 processor with 8GB of RAM which is really top notch when it comes to performance and gaming. The storage is spacious too as we got a 256GB of internal storage inside. However, despite having a really great hardware inside and a really sexy design, some people might not be a big fan of the lack of fingerprint scanner and of course, the sliding mechanism as it involved moving parts. Again, the camera of the smartphone isn’t a great one for a flagship smartphone but it will do pretty well. The OPPO Find X has a futuristic look. The company has given us a glimpse of what the future of smartphone might look like and damn, the design and the features of the OPPO Find X is really game-changing. it might not be a perfect smartphone but it’s definitely powerful and beautiful.