One of the things that ASUS ROG is known for is their iconic design in their devices whether that’s a laptop or mobile devices like this one, the ASUS ROG Phone 3. The ASUS ROG Phone 3 features a design that is similar to its predecessors but this one is cleaner and less complicated with its glass back cover but of course, it still comes with a heat sink at the back. But of course, it’s not finish because there’s the aluminum frame too which makes the smartphone tougher and more solid to feel but since the smartphone does pack a large 6000mAh battery inside, it does feel heavy and thicker too which gets a little bit of tiring to hold after a while of gaming. Since this is a gaming smartphone, there’s capacitive trigger buttons on this one and you can manually adjust the sensitivity of it and you can even use slide, swipe, and other gestures which is pretty cool for gamers. Since we’re running the latest Snapdragon 865+ processor inside, you can experience 5G on this one and boy, the download speeds was fast and in Makati and even at Essensa BGC, I can go up to 300mbps on Smart which is amazing and fast. Definitely a game changer when playing games on the go. 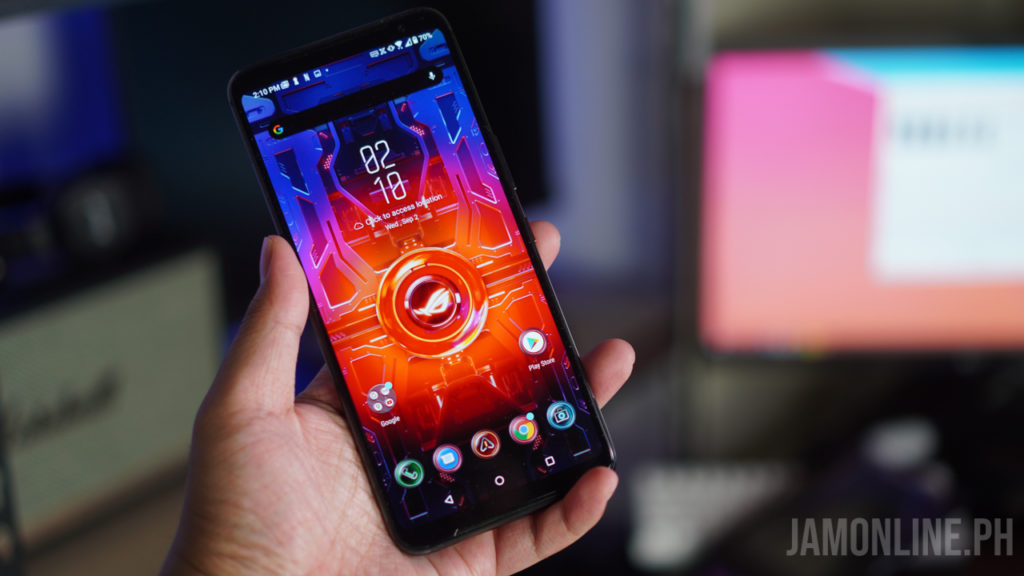 One of the advantage of having the ASUS ROG Phone 3 is the display of the smartphone. There’s the 144Hz display on the smartphone which is one of the best in the market right now. Actually, this is the best display for mobile gaming that you can find in the philippines as this one offers the best refresh rate on a smartphone and also the touch response to this one is already excellent which means playing FPS games on this one will be just superb. 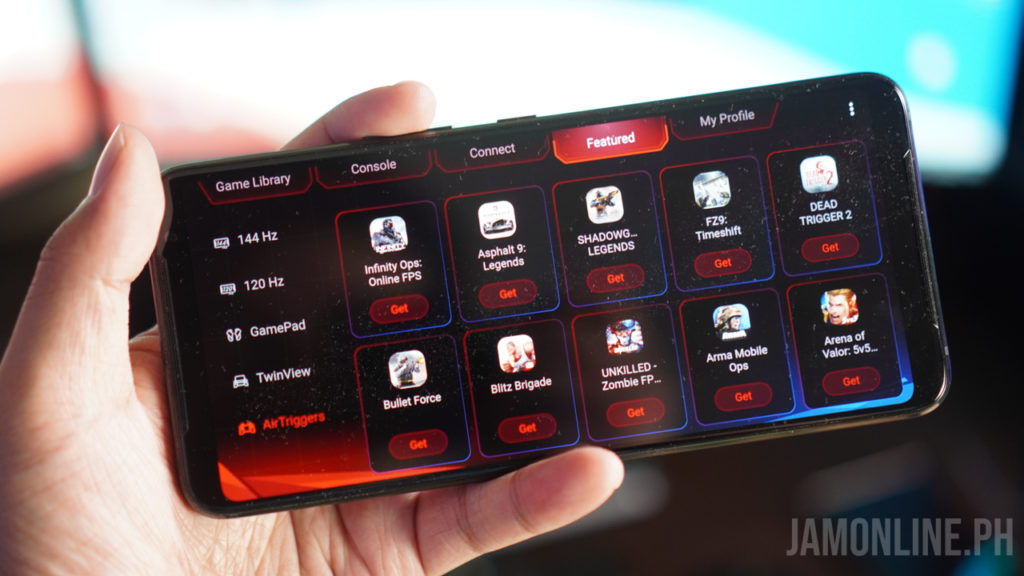 As for the display’s quality, we got here A 6.59-inch AMOLED display with a full HD+ resolution and the colors were great even when using it outside. And of course, there’s the bezels on this one which gives you a better grip on the smartphone and avoid accidental touches and to bring more space for accessories like the Kunai Gamepad 3.

There is no need to prove the ROG Phone 3 when it comes to gaming performance because this smartphone just decimates everything in its path thanks to its powerful Snapdragon 865+ processor inside.

First, let’s discuss the thermals on this smartphone. The ASUS ROG phone 3 does have a higher temps compared to the ASUS ROG Phone 2 which I experience on all Snapdragon 865 and 865+ smartphones however, the AeroActive Cooler 3 does its job and it does cool down the smartphone for me so I really don’t have any problems with it. The smartphone can go up to 45c when playing games but the AeroActive Cooler does bring it back to 40c so when playing games, I highly suggest that you use the cooler.

When it comes to benchmarks, the ASUS ROG Phone 3 is just amazing. We got here some high scores and everything was running smoothly and fast. Check out the benchmark scores that we got on the smartphone:

One of the advantages of the ROG Phone 3 compared to other smartphones is that it can handle PUBG Mobile at up to 90fps on smooth graphics settings which is not possible even on some smartphones that are running on 865+ so it’s refreshing to see to have this feature on the ASUS ROG Phone 3.

There’s nothing much to see on the software side of the smartphone but there’s the ROG Armory Crate which is unique to the smartphone series and what I like about it is that you can see the games that are compatible in running in 120fps and 144Hz. Just like the previous generation, you could see the temps and the status of your smartphone including the free storage and the free memory and of course, we still have here the X-mode which will boost the performance of the smartphone even more but honestly, X-mode or not, the ASUS ROG Phone 3 is really powerful. With Game Genie, you can configure your game triggers which lets you do shoulder buttons on the smartphone and also adjust the refresh rate and other settings that can help you in your experience in gaming. The shoulder buttons was really helpful in FPS games and it lets me respond and shoot faster in those games. The camera has never been the strongest suit of the ASUS ROG Phone 3 but it you ask me, the smartphone’s triple lens rear camera will work just fine. It’s way more noticeable now because it’s protruding and it houses the 64MP main camera, a 13MP ultrawide camera and a macro camera. Honestly, they could just ditch the macro camera and replace it with a telephoto lens instead but nonetheless, I was still happy with the results of the camera that we got.

Check out the shots that we got using the smartphone:

Obviously, it wasn’t the best one on a flagship smartphone but it definitely exceeded my expectations and I’m pretty happy about it. 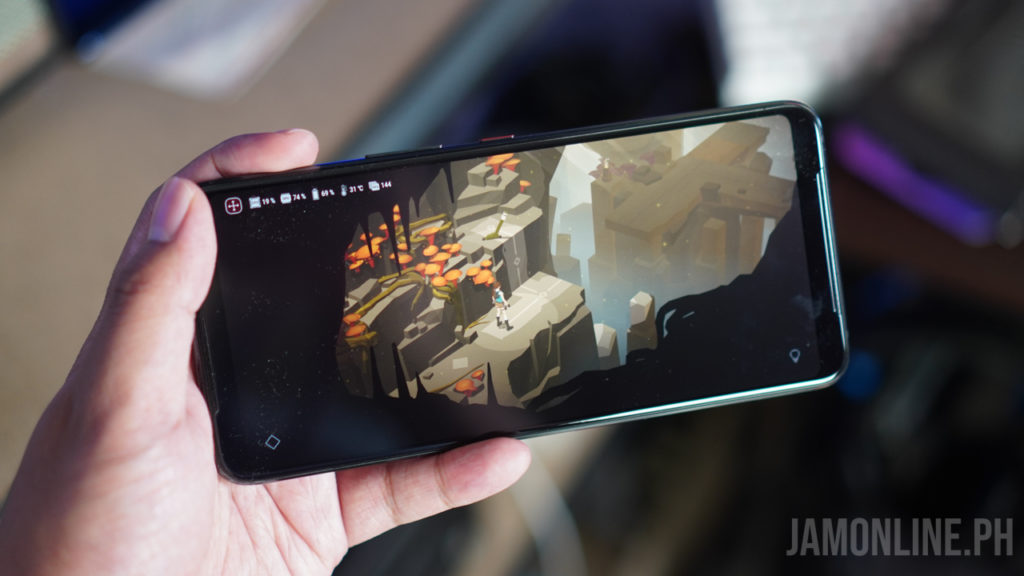 The ASUS ROG Phone 3 is a one fine gaming smartphone. I love it actually. It’s probably the best gaming smartphone out there as we got here a matured features that was refined from last year and of course, a more powerful hardware this year.

Everything on this smartphone is running just fine including the processor, display, battery and performance. I was actually surprise that the smartphone exceeded my expectations when it comes to the camera and again, the availability of the accessories to the smartphone is something that you would definitely love on this one. If you love gaming then there’s no question anymore. This is the smartphone for you. The ASUS ROG Phone 3 starts at Php39,995