Gone are the days when buying a gaming smartphone would cost an arm and leg. With the launch of several devices designed to meet gamers’ needs, it’s no surprise that Infinix packed the Hot 10S with impressive features to go head-to-head with big brands.

Offered at a much lower price than other affordable “gaming” phones, we have invested some time and attention in the Infinix Hot 10S to see whether it is worth the shot or not.

But before we dive deeper into our review, let’s have a quick recap of its key specs. The Infinix Hot 10S is stunning as it flashes a glossy body that comes with a sophisticated diamond pattern on its rear part. It’s no brainer, Infinix didn’t fail to deliver a head-turning device that can stand out when placed beside other phones at its price point.

It features a 3D curved back, too, but this effort isn’t enough to make one-hand usage comfortable as it comes with a tall, chunky physique. Aside from for protection, we also recommend the use of its transparent hard case to avoid turning this beautiful device into a fingerprint-filled unit for it has a smudge-magnet body. 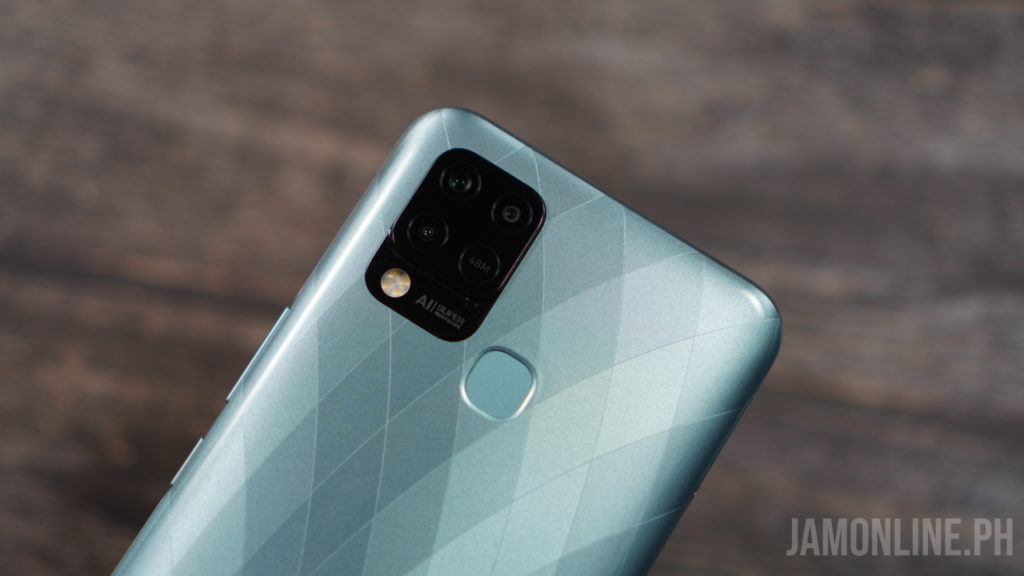 Meanwhile, consumers can choose from different colorways. Ours is dressed in Morandi Green color variant, but you can choose from Heart of Ocean, Black, or Purple color options. For us, all models are attractive and classy, but we prefer the unit we have as it screams luxury. Although it has a tall body, all keys are placed somewhere we can easily reach them. 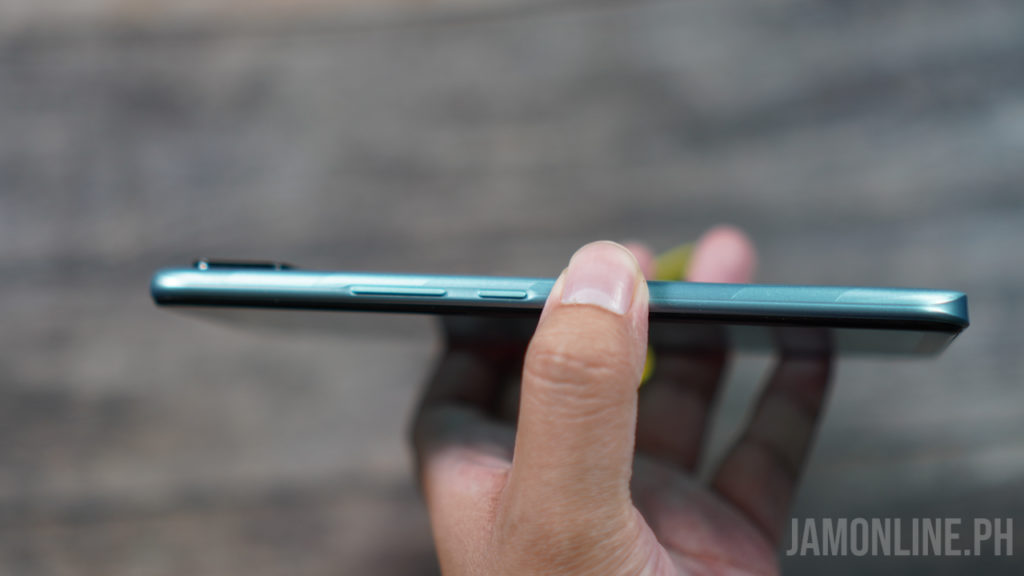 Its dual-sim card tray with a dedicated microSD slot is located on the left side, while its right cheek accommodates its volume rockers and power/lock button. Its top part is left unoccupied, while the bottom part comes with the 3.5mm audio jack, primary MIC, loudspeaker, and microUSB port. 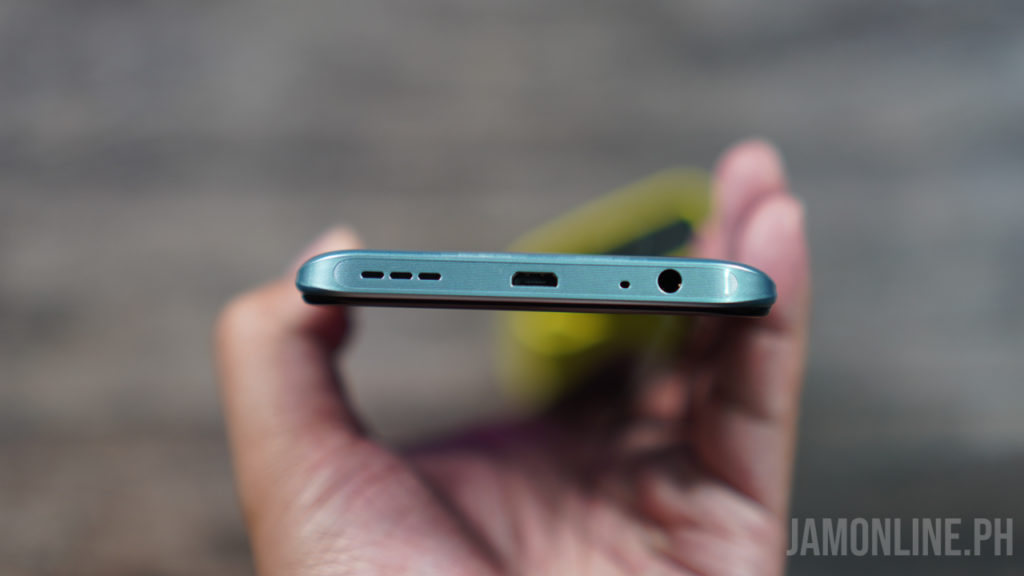 Meanwhile, you’d see its rear-mounted fingerprint scanner, triple camera setup, LED flash, and some Infinix branding when you flip the device on its back. With this well-balanced design, we can say that this is one of the best-looking smartphones that doesn’t compromise functionality. Engineered for gamers who are looking for an affordable device, Infinix made sure to deliver one of the most important features of a gaming smartphone: a large, good display. The device sports an enormous 6.82-inch LCD screen, big enough to enjoy playing games that need multiple controls. In fact, we love playing Call of Duty: Mobile, PUBG, and Mobile Legends: Bang Bang using the phone, as it has spacious screen for its touch controls. This prevents us from misclicking them when in-game.

In addition, it bags a 90Hz refresh rate and 180Hz touch sampling rate, which really works wonders when playing games with heavy graphics.

However, we also consider its display as a hot-and-miss feature, as it only flashes an HD+ 720p resolution. This makes us wish that Infinix has invested in better screen resolution to battle out other devices that come with better display quality at its price point.

It has punchy colors, and it features great viewing angles too. However, we noticed that its brightness doesn’t do well when we used the phone outdoors.

The Infinix Hot 10S is juiced with a whopping 6,000mAh battery, which looks good on paper. To give you a clearer idea about its battery life, it scored 18 hours and 15 minutes on the PCMark battery life test. Although this result ain’t that bad, we just have to note that we’ve seen better test results on devices with the same battery capacity. Nevertheless, it still did its purpose. Tapped as our main driver, it could last for almost two days when we used it for basic communication and casual social media browsing during weekdays. However, when we heavily used it on weekends, it lasted for a solid 9 hours and almost 20 minutes before we saw the need to plug it in. Our activities include heavy social media usage and gaming.

Meanwhile, it took us over two hours to fully charge its battery. This is quite expected since it only has a 10W charger, which might be a turnoff for gamers. Hence, we hope that Infinix would equip their next gaming smartphone with a faster-charging feature. The Hot 10S is loaded with XOS 7.6 skin based on the Android 11 operating system. Nothing much is special with its software, but we must give Infinix a credit for having a clean and user-friendly interface. Just like other Android phones, the Hot 10S also comes with a bunch of pre-installed apps, leaving us with 115GB internal storage out of 128GB. This is still enough for us, as we’re still able to download several games, social media apps, and more. However, if you feel like this isn’t sufficient for you, then don’t worry because you can expand its storage via microSD card.

Powered by a Helio G85 octa-core processor, paired with 6GB of RAM, we expected the Hot 10S to provide us with a smooth mobile gaming experience. Meanwhile, we also ran it on multiple benchmark apps to give us an overview of how it would perform throughout our tests: We enjoyed playing around with the Hot 10S. With its powerful specs, we’re not surprised that we didn’t experience a visible lag. Shifting from one app to another is smooth, as well.

The only downside is that it gets hot when it’s running multiple apps in the background, and when we’re playing games with heavy graphics for a long time. To overcome this, we put its graphics settings at a low to medium level.

Meanwhile, its face unlock and fingerprint scanner are working fine and fast.

The Hot 10S sports an AI camera, bagging a 48MP main shooter and a 2MP macro lens. For selfies, it has an 8MP snapper.

Its camera performance is underwhelming for its specs on paper. It can shoot great images a well-lit setting, but photos became too soft with too many visible noises when taken indoors. It has poor night shots, too, while its Portrait mode didn’t meet our expectations as well.

Meanwhile, its AI camera can detect the subject if it’s a person, nature, and more. However, it didn’t do anything intelligent to improve its colors, sharpness, and other settings. Good thing, it has decent selfie shots. It can capture natural-looking self-images, and its portrait mode won’t overwork its bokeh effect. Overall, the Infinix Hot 10S is a decent gaming smartphone, which could be a great alternative for gamers who are on a budget. It has impressive battery life and a good display that can satisfy every gamer’s need.

However, most of its specs appear just like a gimmick, even if they look competitive on the specs sheet.

Still, if you’re looking for a device that can last longer and has a bigger display than other smartphones at its price point, then the Hot 10S is worth considering.