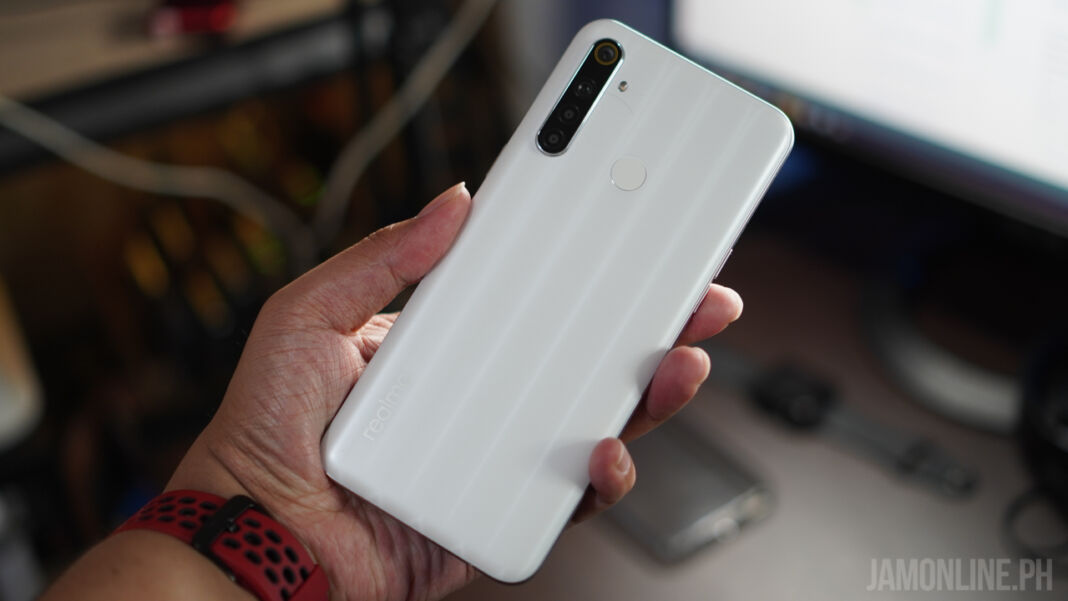 One of the newest budget smartphones is Realme 6i. The smartphone is the direct successor of the realme 5 and this time, we’re getting here a brand new Helio G80 processor inside and the realme 6i is the world’s first smartphone to use that processor. Now the question remains, is the realme 6i good? Check it out in our review of the smartphone below: 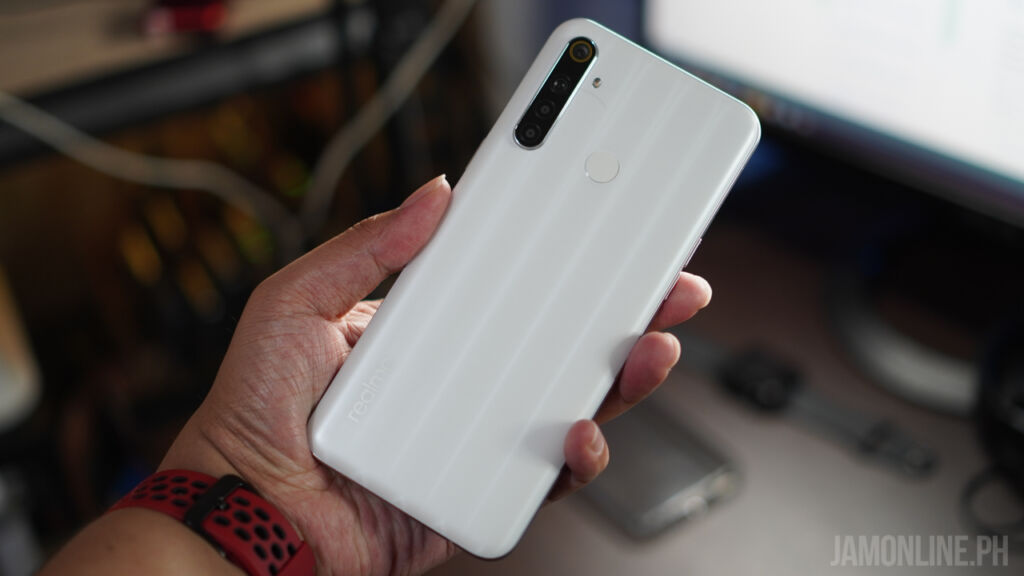 realme 6i Review: Design and Hardware 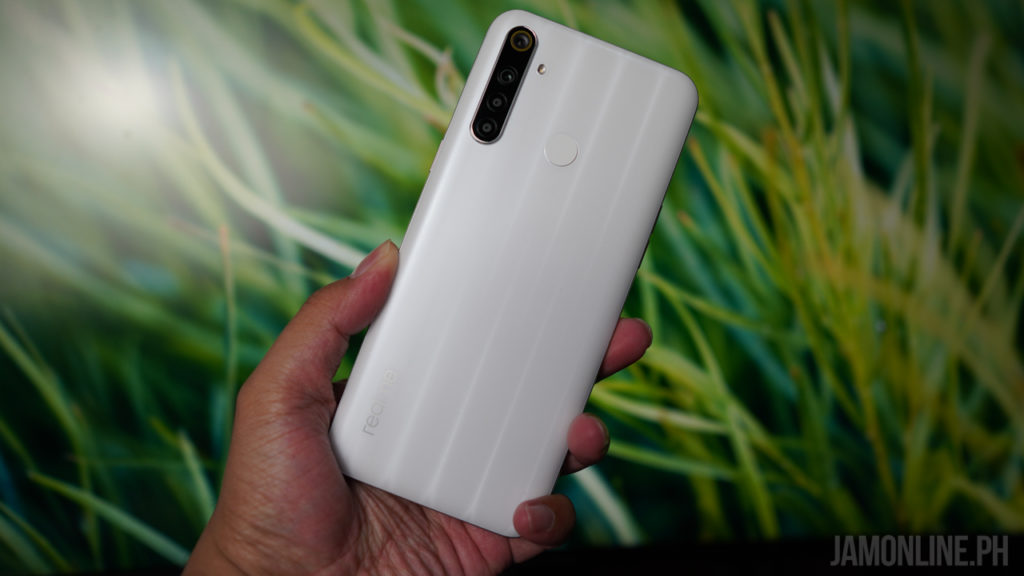 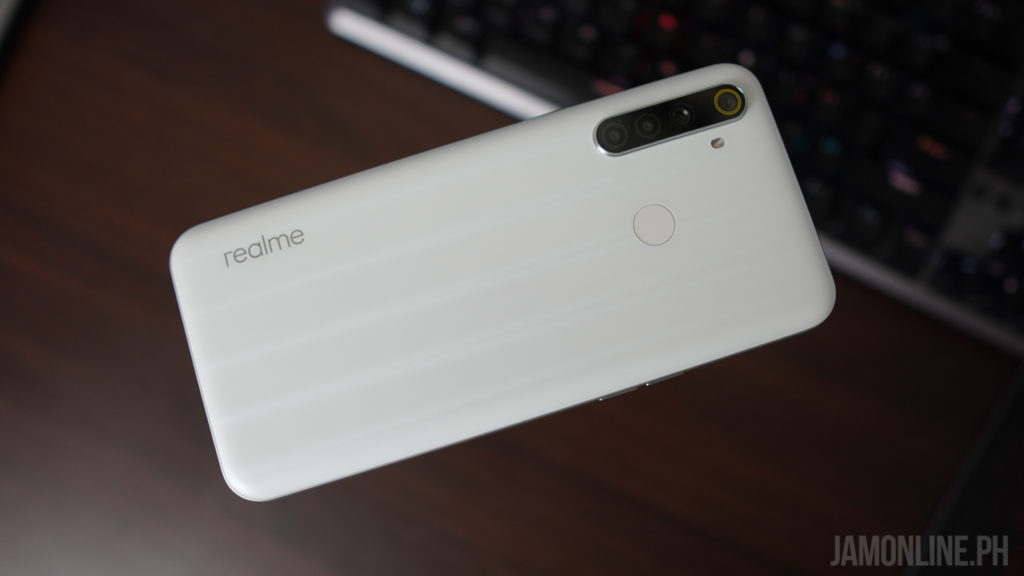 When it comes to ergonomics, the Realme 6i does have pretty ergonomics despite its large display due to its aspect ratio but I still suggest that you always use the included jelly case of the smartphone to add more grip for the smartphone. 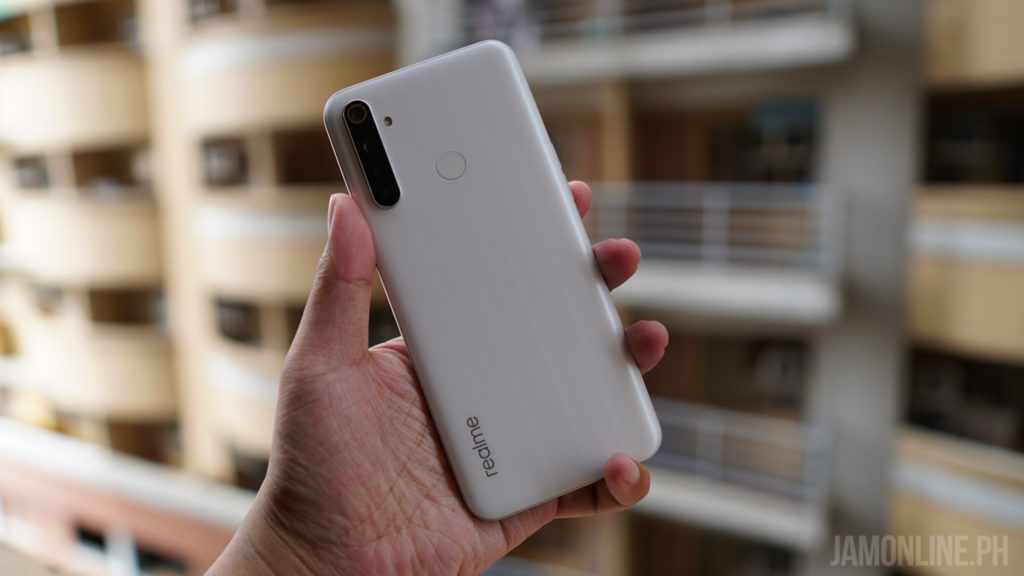 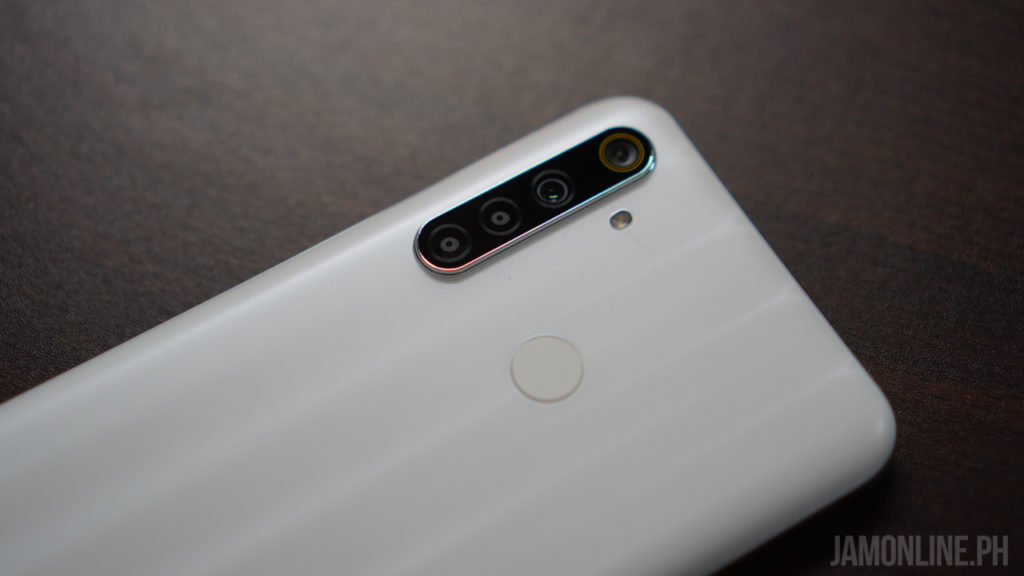 Thankfully, the Realme 6i comes with a USB-C port. Yes, it now uses a USB-C port and the best part is that the smartphone now supports 18W fast charging although it may take an hour and a half to fully charge your smartphone from 0%. Nonetheless, it is still fine and a welcome feature for me. 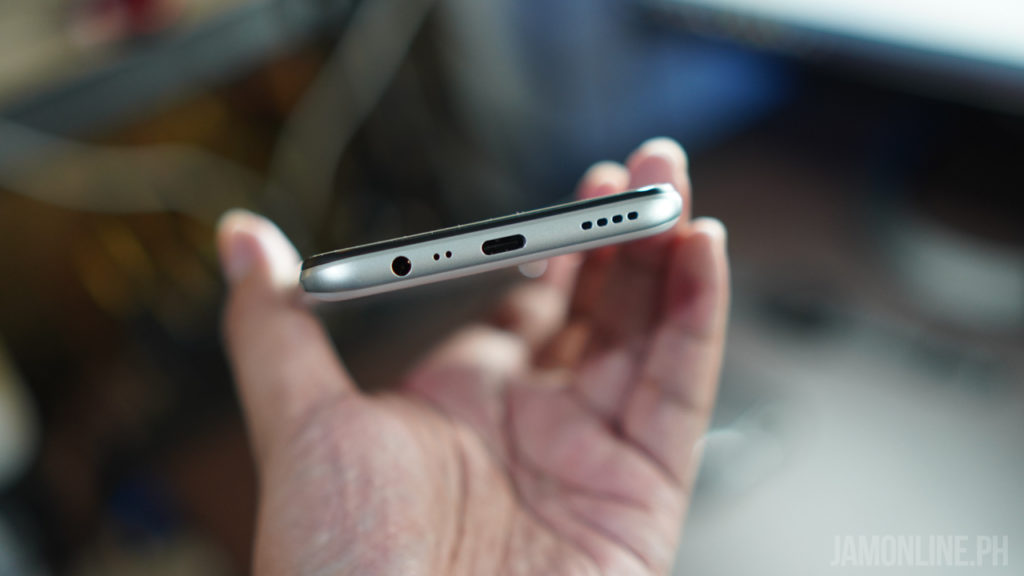 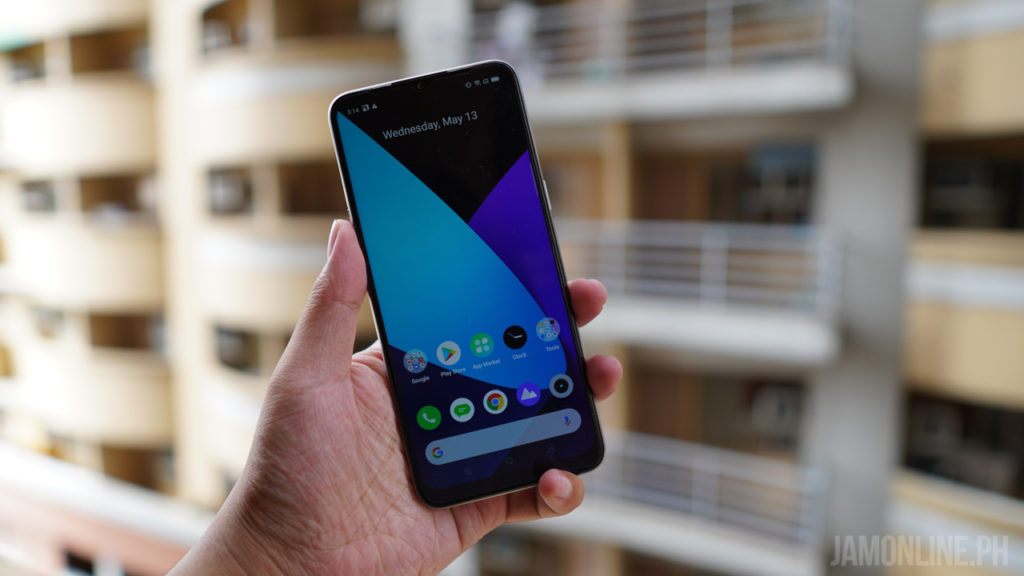 One of the advantages of the Realme 6i over the other smartphones is that we have here a pretty large 6.5-inch display in the smartphone but unfortunately, this one only uses an HD+ resolution which is really noticeable when you’re looking at the display of the smartphone. The colors are fine on the display and there’s the notch at the top. The display’s brightness will work just fine but don’t expect the best brightness on the smartphone’s display. 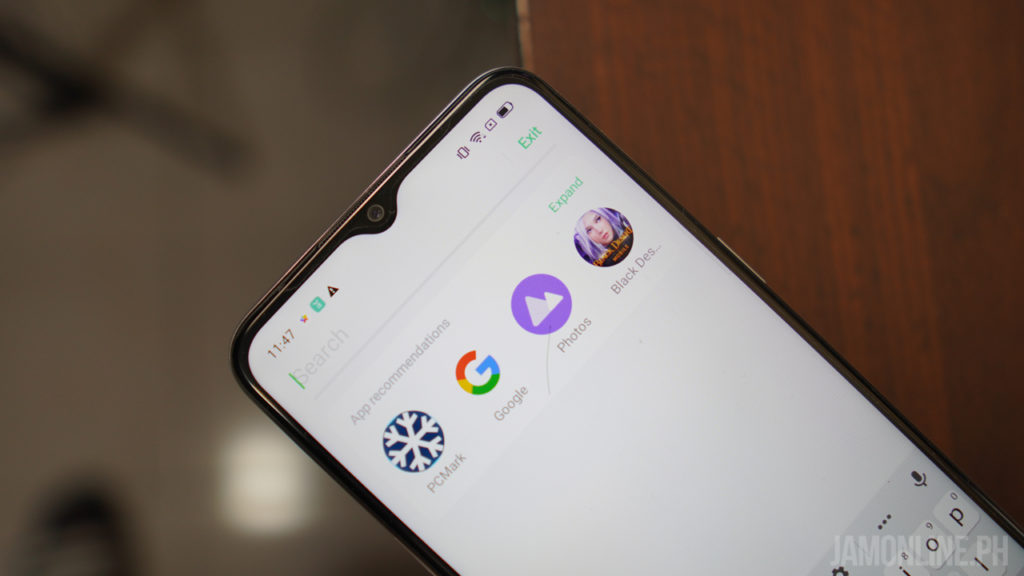 Inside the smartphone is a large 5000mAh battery which is common on most Realme smartphones but this time, we’re running the smartphone on Helio G80 processor from MediaTek and unfortunately, the smartphone doesn’t seem to have the long battery life of the predecessor. We weren’t able to use PCMark Battery test on the smartphone as it kept on crashing but when we checked our on-screen time, the smartphone was only able to last up to 10 hours from 100% to 20%.

Nonetheless, that battery life still managed to keep you a single workday usage despite playing some casual games on the smartphone. 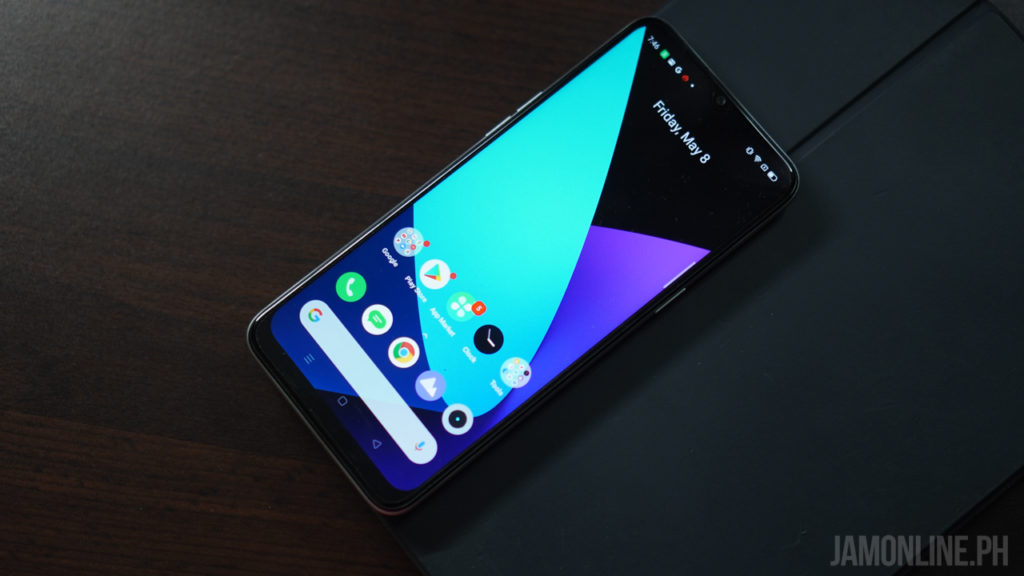 The Realme 6i uses Realme OS with Android 10 and yes, it was good, smooth, and really responsive. It’s different from the ColorOS that was used before but it does have a lot of similarities. The Realme OS has a closer feel to vanilla Android which is why the UI and experience on the smartphone are really fast and responsive.

Of course, it does come with some pre-installed applications but doesn’t worry because the Realme 6i doesn’t take too much of the storage and the UI is still user-friendly.

The biggest question about the Realme 6i is how does the smartphone perform. Why? Because this one runs on MediaTek Helio G80 processor and this is the world’s first smartphone to run that chipset. The one that we got comes with 4GB of RAM and 128GB of internal storage. And in our test, we find the Helio G80 just a little bit powerful than the Helio G70 of the Realme C3. Check out the benchmarks that we got on the smartphone.

In gaming, we found the processor powerful enough to run most games including PUBG Mobile, Call of Duty Mobile, and Black Desert Mobile. As expected, the smartphone can run Mobile Legends: Bang Bang without problems with HFR mode however, the ultra graphics aren’t available. In PUBG, the smartphone is capable of running the game in ultra settings with Balanced graphics but with Call of Duty Mobile, we found the smartphone’s chipset still not optimized for the game however, we still got pretty reasonable results for the game. 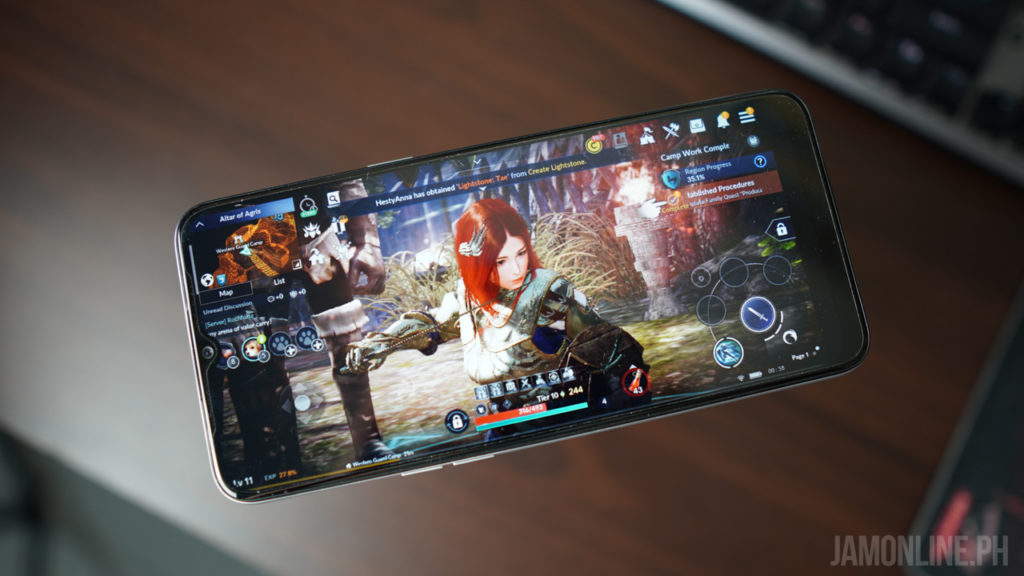 Surprisingly, Black Desert Mobile runs on the smartphone at the highest settings possible but the frame drops are noticeable in the game and it might affect your gameplay so I suggest toning down the graphics settings of the smartphone whenever you’re playing Black Desert Mobile. Here’s our benchmarks on the games on the Realme 6i using Gamebench: 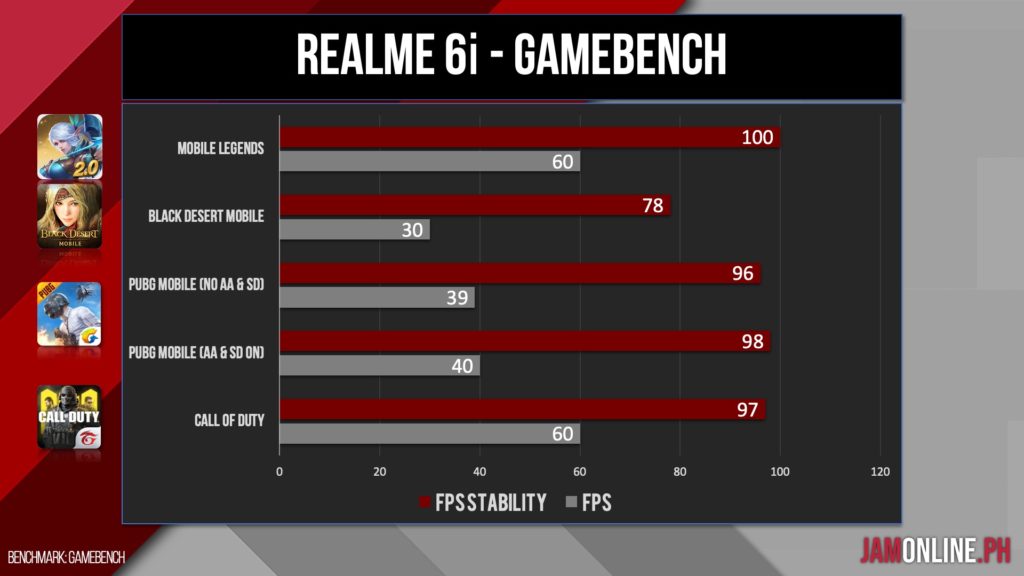 Performance metrics were captured using GameBench Pro, the most accurate, enterprise testing tool in the industry.  Check out the link to learn more: https://bit.ly/JamOnlineGamebench 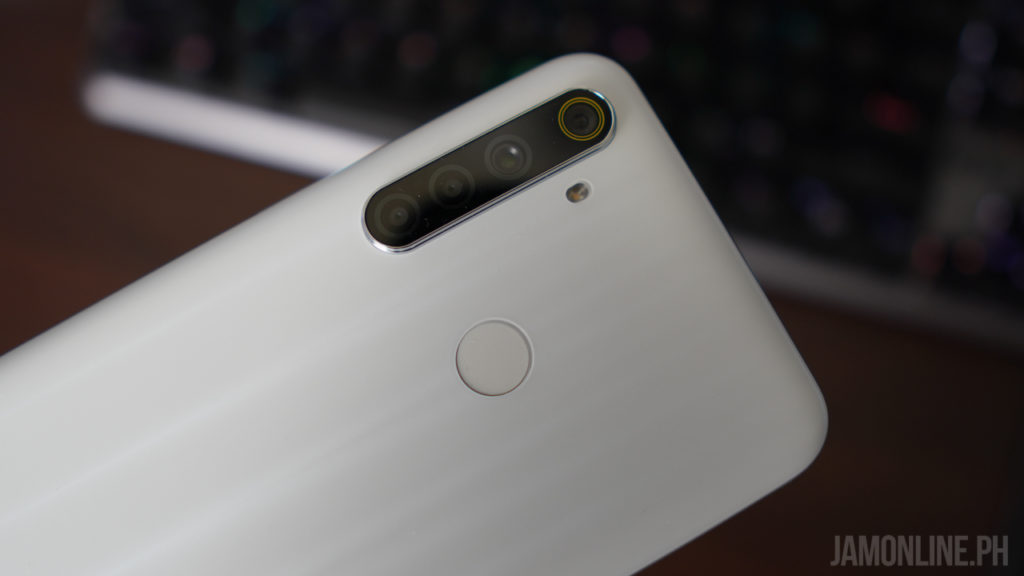 As expected, the Realme 6i packs a quad-camera setup with a camera module design similar to other Realme smartphones and as expected, the quality is what you can expect on a budget smartphone. First, let’s talk about the camera. We got here a 48MP f/1.8 main camera, 8MP wide-angle lens, 2MP macro lens, and a 2MP portrait lens. 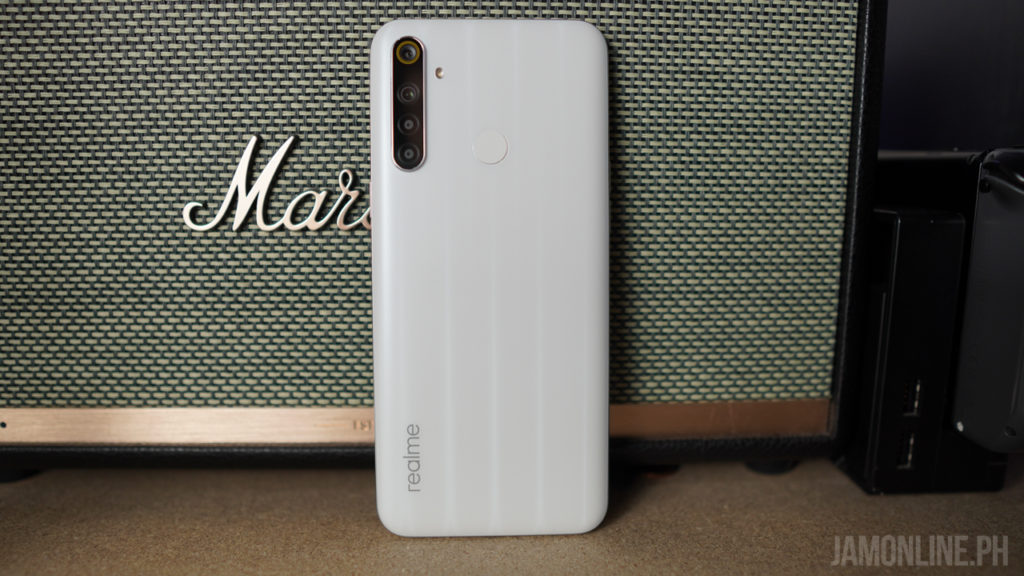 In our shots, the 48MP camera did pretty well for its price range while the 8MP wide-angle lens of the smartphone is better than I expected. The smartphone also packs a night mode but it’s not as good as you can expect. Check out the shots that we took using the smartphone:

The smartphone can record at 1080p60fps which is a good thing but expect the smartphone to have a quality that you can expect on a budget smartphone. Overall, it’s not a perfect camera but it can do its job well. 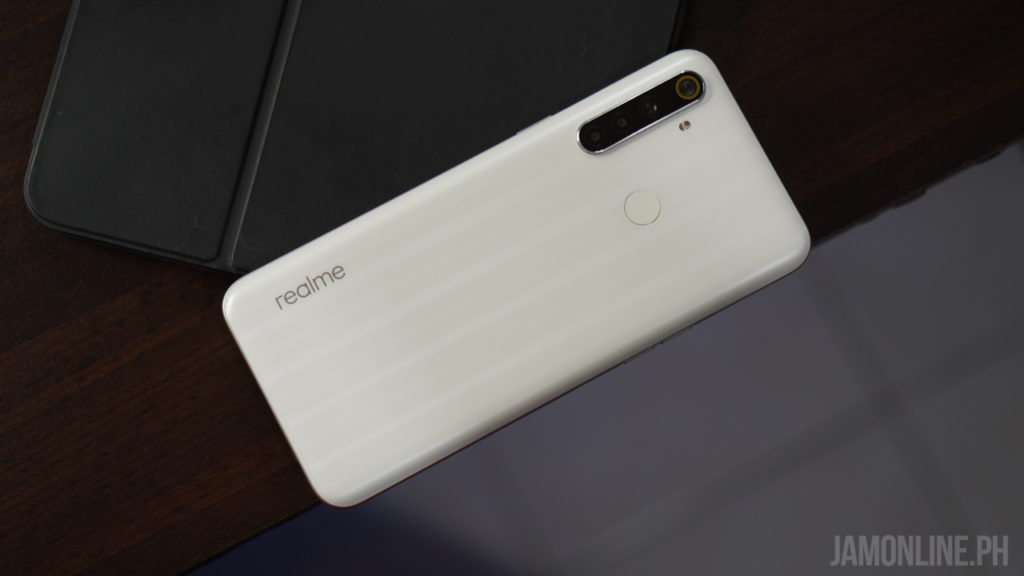 Realme 6i is a budget smartphone and yet, it still offers great value for its price. Yes, it’s not a perfect phone as we had slight hiccups on the Helio G80 processor but it is still a quite powerful one for its price and it can still do a lot of gaming. The back design of the smartphone is still nice despite using plastic and being in the affordable segment and we still got here a large display. 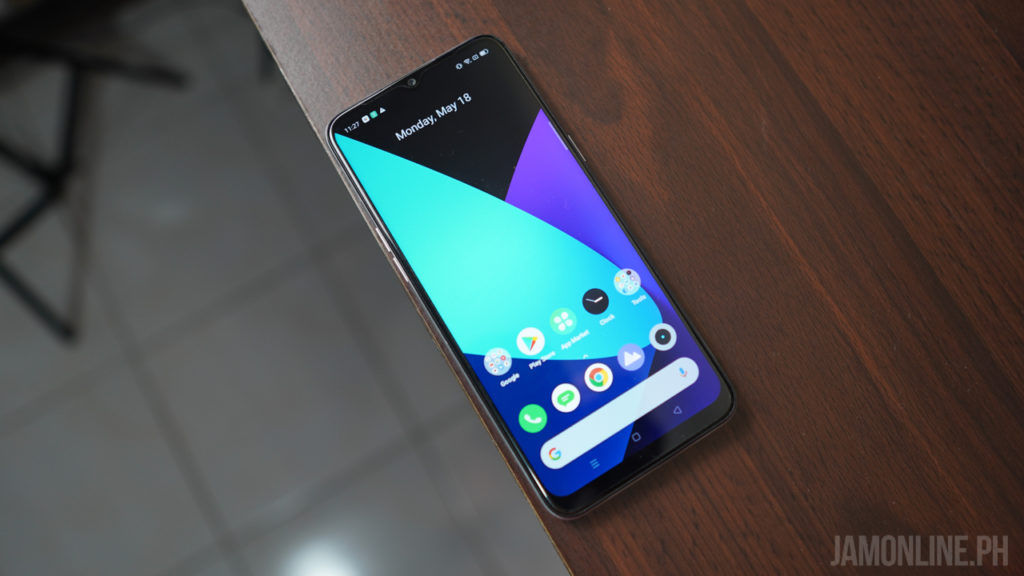 OPPO launching the Reno5 in the Philippines soon