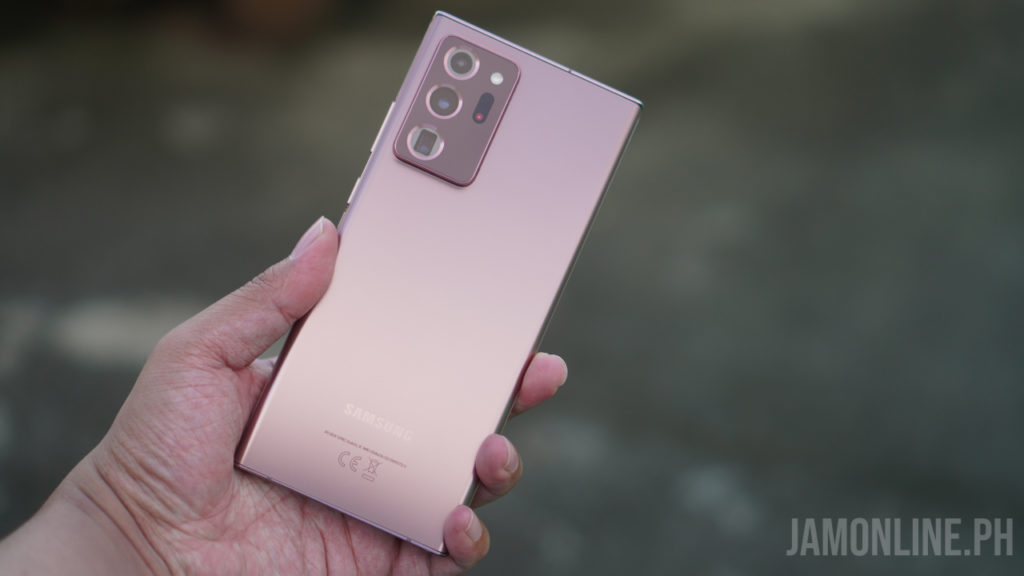 One of the features that a lot of people love on Samsung flagship smartphones is the solid build quality and the Galaxy Note20 Ultra doesn’t disappoint. In our review unit, we got the mystic bronze color and it features a haze finish that feels premium, cleaner, and a lot better. Not only that, but it also attracts fewer fingerprints because of its haze finish. 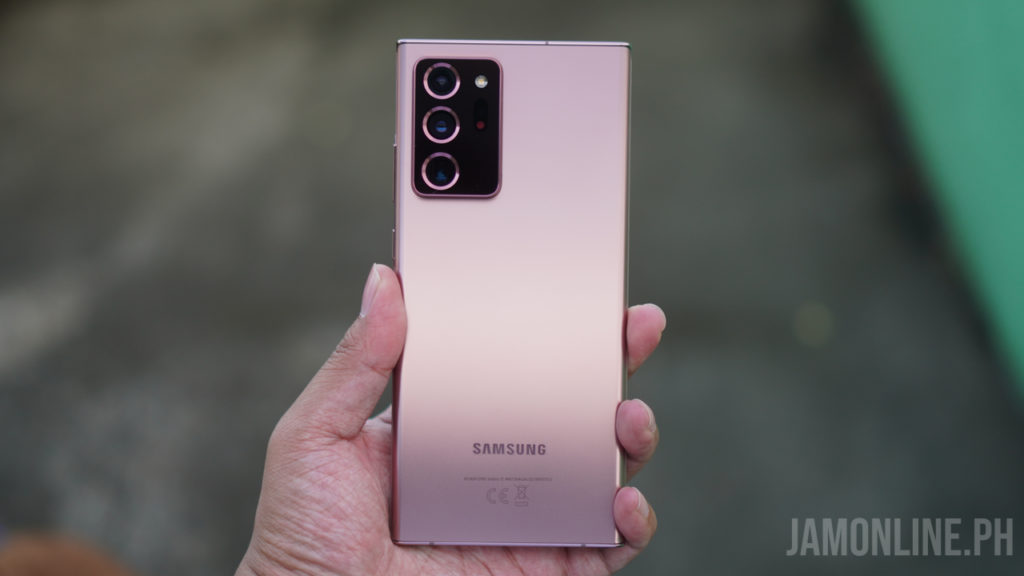 One noticeable thing about the smartphone after you hold it is the camera module at the back of the smartphone and it’s annoyingly big and thick. But it’s the colors and the design of this one is pleasing to look at and it’s perfect for the Mystic Bronze color that we have right now. But again, it’s still a thick camera module. 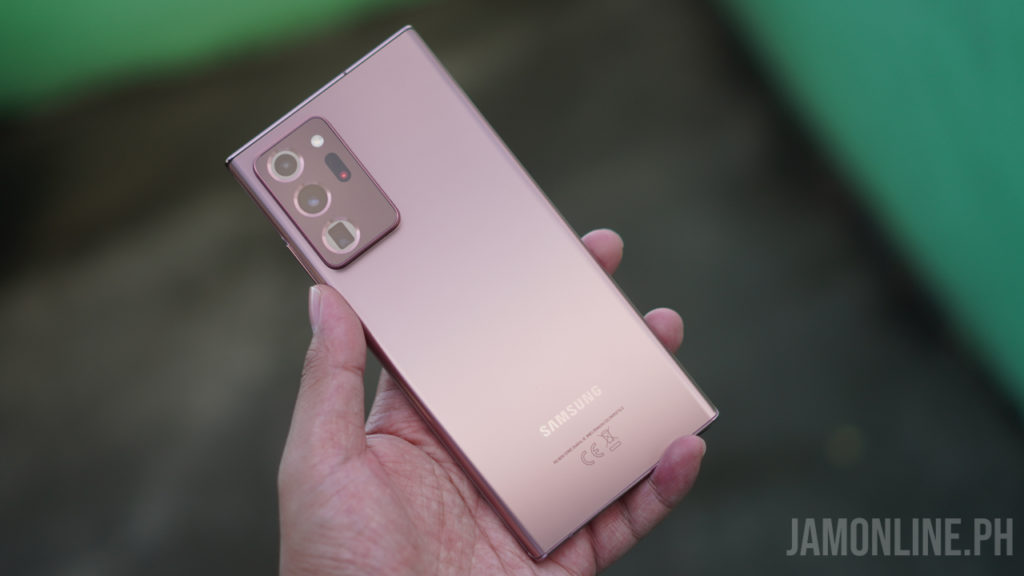 The Samsung Galaxy Note20 Ultra is massive and if you have small hands, you might want to reconsider this one but the curves of the smartphone fit perfectly well in my hand but I highly recommend that you still get a case on this flagship smartphone to fully protect the device. As expected, still no headphone jack on this smartphone and you can find the USB-C port below and oh, the S-Pen has been moved to the other side and as a long time Galaxy Note user, I found it confusing at first maybe because of habit but don’t worry because you’ll get used to it. As expected, the volume rocker and the power button are placed on the right side of the smartphone and it will do just fine. 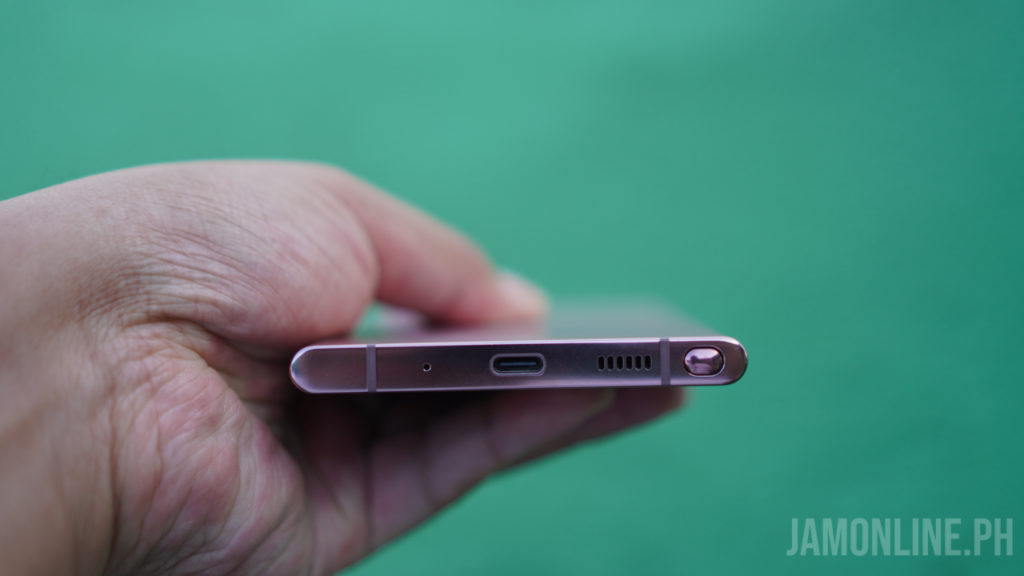 Aside from being a productivity device, the Samsung Galaxy Note20 Ultra is also a great device for multimedia. We got here a loud and crisp speaker which is perfect for watching movies on Netflix on the go and combined with that beautiful display, this one was really an awesome smartphone. 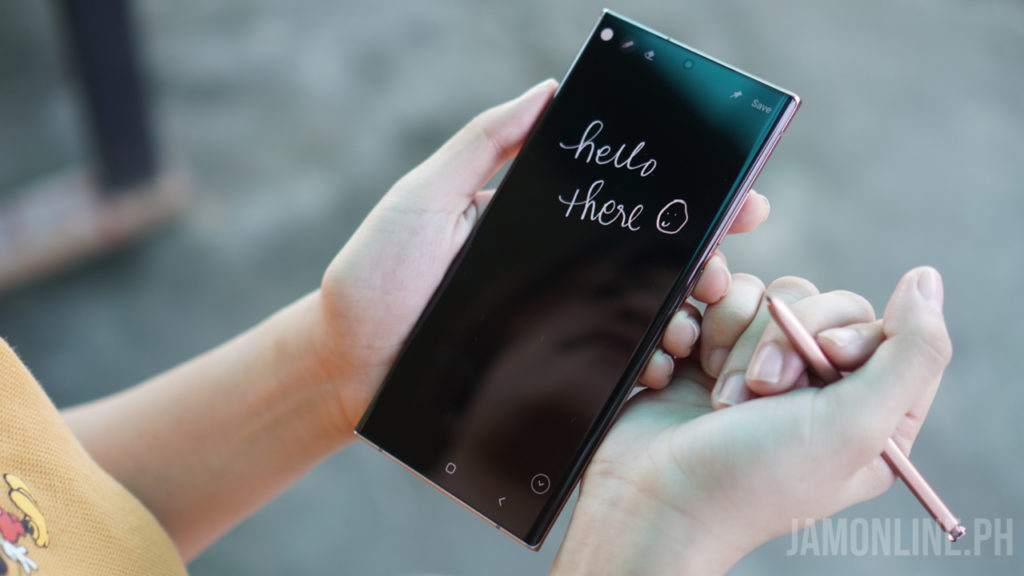 This is probably one of the reasons why people are embracing the Galaxy Note series. People love stylus especially if you need to sign contracts and you always need to make annotations to your presentations. In my case, I use it to draw and to write my notes and with the Samsung Galaxy Note20 Ultra, we’re getting some upgrades in here including penmanship to text in just a tap 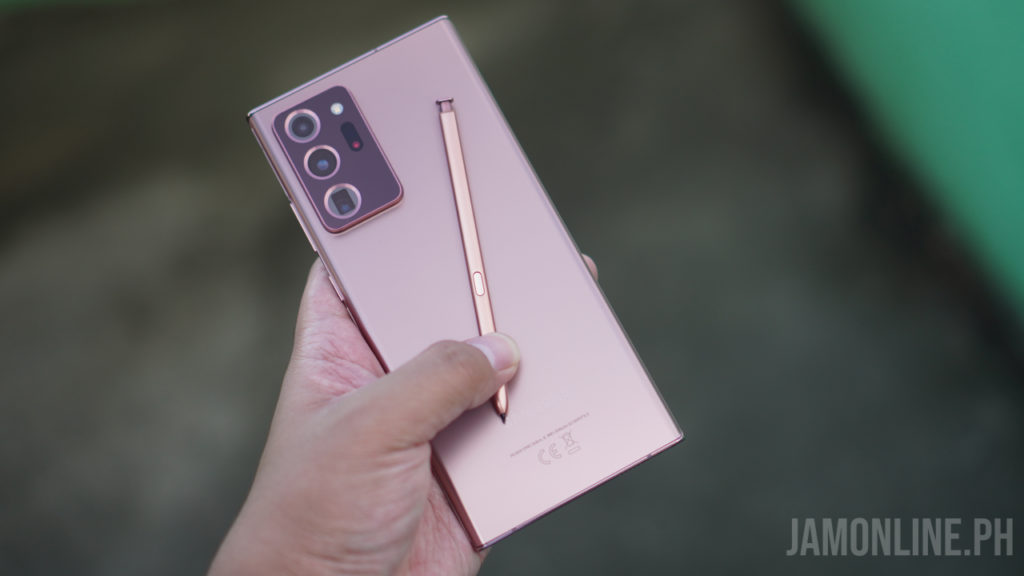 But the best part? It now has a latency of 9ms and everytime I use the S Pen to write on the display of the smartphone, there’s a writing scratch sound too when you’re using the S Pen so you could feel that you’re really writing on a paper. Is the upgrade good? Yes, definitely but it’s not drastic. The Samsung Galaxy Note20 Ultra does have the best display in the market right now. We got here a 6.9-inch Dynamic AMOLED 2X display here with a WQHD resolution. Just like the S20 series, we’re getting here a 120Hz refresh rate and yes, the panel on this smartphone is powerful and also beautiful at the same time. There’s a curved display here too similar to the Galaxy Note10+ but it isn’t distracting or distorting when writing notes on this smartphone. The display is really bright and I really had no problems with it. The viewing angles are really good too and since this is an adaptive display, the smartphone automatically adjusts its refresh rate so you can conserve a lot of battery life for this one. The only problem that you might encounter on this smartphone is that you can only run 120Hz at Full HD resolution. So the Samsung Galaxy Note20 Ultra comes with a 4500mAh battery and in our review, it was frustrating that the smartphone easily drains in my usage which is not surprising as Exynos 990 is known to be a power hog. In our PC Mark test of the smartphone, we achieved a score of 8 hours and 12 minutes which is disappointing.  But in our usage, the smartphone can last up to 9 hours of average to heavy usage before asking for juice. As expected, this one is running on One UI 2.5 but of course, this one has a lot of perks compared to other Samsung smartphones as we got here wireless dex and other applications that can help you be productive such as S Note and Microsoft MyPhone which lets you open apps and mirror your smartphone to your Windows PC which is really cool. You can also expect here the Samsung applications such as the Galaxy Store and the Samsung members app. The UI and UX of the smartphone is still familiar and there has been a minimal change from the previous generation so if you’re coming from a Samsung smartphone then you won’t have any problems running this one. This is probably my biggest gripe about the smartphone. Again, we’re still using Exynos 990 on this smartphone which is the same processor as the Samsung Galaxy S20 series but it’s still far from Snapdragon 865 when it comes to performance and the power efficiency isn’t as good as the chipset from Qualcomm. A lot of improvements are needed on this smartphone and we definitely notice the effect of this. In some games like PUBG Mobile, the smartphone is only capable of up to Ultra framerates while the Snapdragon 865 lets us run the game at the highest graphics settings with extreme framerates. But before we get down to the gaming review of the smartphone, check out our benchmarks of the smartphone below:

As you can see in the scores, the scores are already high and you can definitely classify the smartphone as a flagship one but again, it’s not as powerful as the Snapdragon version. When it comes to gaming, the smartphone is capable of running games without problems or hiccups but I had issues like what I’ve mentioned earlier and the smartphones get a little bit hot when playing for a long time. Check out our gaming review of the smartphone below:

As expected, the smartphone was able to run games without problems and we even scored up to 120fps on some games but again, it’s a problem when it comes to some games as the graphics settings aren’t as optimized as the one on Snapdragon. 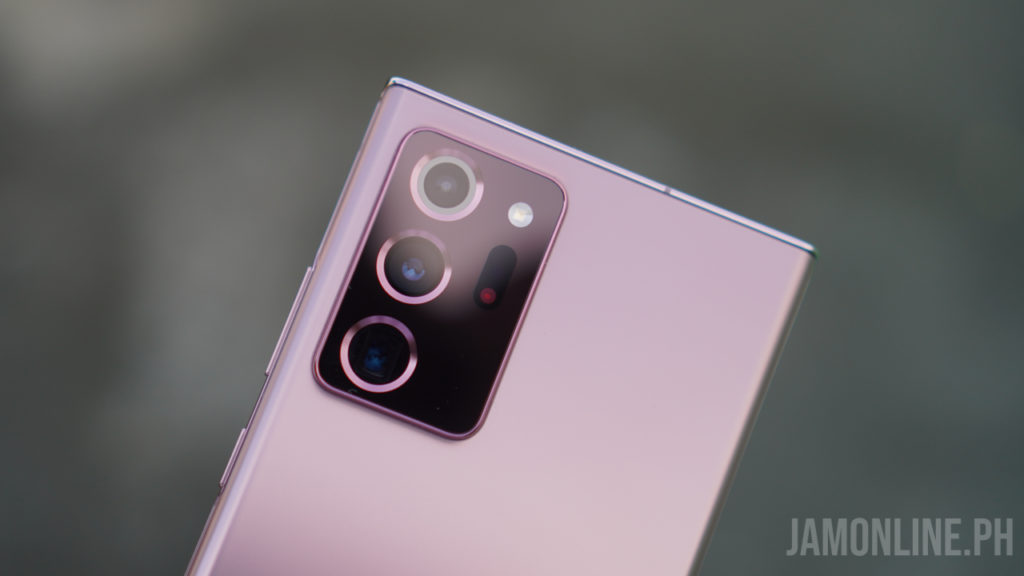 The Samsung Galaxy Note20 Ultra never failed to amaze us when it comes to the camera. We lost the 100x zoom on this one but we’re getting here a 50x zoom which is more refined than the S20 and the autofocus issue is gone already on this smartphone. Our shots on this one were really good whether I’m shooting on lowlight or at decent lighting conditions. And oh,  we do get here an 8K video recording too at 24fps.

Actually, why don’t you check out the shots that I took and be the judge of that:

The selfies on the smartphone is excellent and the rear camera? They’re really good. I mean in ALL aspects. There’s Pro Video mode too on the smartphone so you can finally adjust the settings for video on the smartphone including the audio input and if you have the Galaxy Buds Live, you can also use that one as an audio input. Actually, I’ve used the Samsung Galaxy Note20 Ultra in shooting some of my b-rolls and videos on YouTube. Amazing right? Overall, the camera of the Samsung Galaxy Note20 Ultra is a lot better than the previous generation and even the Galaxy S20 series. They’ve refined all the problems and shooting videos on this one is just an amazing experience. Once again, the Samsung Galaxy Note20 Ultra has ticked a lot of boxes that you need on the smartphone. We got here a productivity device thanks to the large and beautiful 120Hz Dynamic AMOLED 2x of the smartphone and of course, the camera of the smartphone is just excellent however, you must take note with the limitations of the Exynos 990 processor that also affects the battery life of the smartphone. So if you need a flagship device that will definitely boost your productivity and also a smartphone for multimedia and also if you love mobile photography then the Samsung Galaxy Note20 Ultra is the one for you. Oh and the S-Pen? It’s really something that you would love on the smartphone