Last year, ASUS has surprised us with their newest notebook made for gaming – the ASUS ROG Zephyrus. The gaming notebook is powerful yet thin. It’s the company’s first foray into the Max-Q design which enables manufacturers to create a powerful notebook and yet, brings a thin profile. The ASUS ROG Zephyrus is the world’s thinnest notebook with Nvidia GTX 1080 inside. Interested? Check out our review of the notebook below.

The ASUS ROG Zephyrus has a very thin profile. Actually, it’s the thinnest notebook in the Republic of Gamers right now and yet, it is one of the most powerful thanks to its Intel Core i7-7700HQ processor and also a powerful GPU inside which is a Nvidia GTX 1080 Max-Q design. The design follows the DNA of the ROG products and despite its thin profile, most of the ports that you need on the ASUS ROG Zephyrus is here. However, due to its hardware, the notebook needs to compromise some things including the SD Card reader. Yes, you need to buy a card reader for the ASUS ROG Zephyrus if you’re a videographer, photographer or if you are into the usage of SD cards. But the rest is basically good. The ASUS ROG Zephyrus got all the ports that you need except for the SD card reader. Since this one has a powerful hardware inside, one of the things that we should be looking at this one is its design. Yes, the notebook is thin so what did ASUS do to have a good thermal flow on the notebook is to have a hinge whenever you open the notebook. Yes, it’s clever however, these moving parts like this aren’t my thing. We can easily break this if you’re careless. The ASUS ROG Zephyrus is the first one in the ROG notebooks to sport a new half-sliced design which made the notebook cleaner than most ASUS ROG Notebooks. The body of the notebook is mostly metal and the orange chamfered edges of the notebook add beauty to the gaming notebook. Most of the internal hardware of the ASUS ROG Zephyrus is placed at the upper part of the notebook which is why the keyboard and the touchpad of the notebook were placed below the notebook. Yes, it’s an odd design for a laptop and it’s quite hard to type on a laptop that loses its wrist rest but don’t worry, there’s an included rubber wrist rest on the box. The ASUS ROG Zephyrus packs in a 50Whr battery and yes, it doesn’t have a good battery life especially if you’re always away from your charger. The notebook can be depleted in just two hours of not gaming but c’mon, that’s expected on a notebook with this hardware. The keyboard of the notebook isn’t mechanical but it does just fine even for gaming. It has a ROG Aura RGB illumination in where you can control the color of the illumination of the keyboard. But again, the placement of the keyboard will take some time before you get used to it. Using the notebook and placing it in your lap is a little bit weird as you don’t have a wrist rest and it may take some time to get used to it. 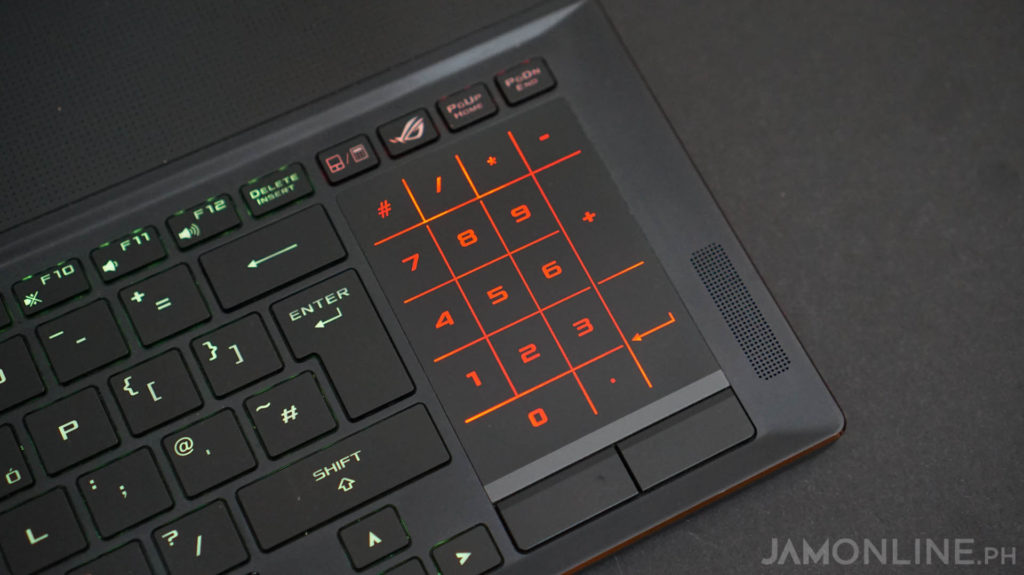 The colors were good and it’s a fine display for gaming. I wouldn’t complain about its Full HD resolution as this one has a 120Hz display. Oh and the display? Overall, it’s good and I have no problems with it. As expected, the ASUS ROG Zephyrus heats up despite having the Max-Q design. That’s understandable considering that we’re having a Nvidia GTX 1080 inside and also a powerful Intel Core i7-7700HQ inside. We got temps up to 90c on the CPU when we’re on heavy load and the GPU can get up to 83c. While those numbers aren’t really that good, we’re still quite happy with its performance. We played different games on the ASUS ROG Zephyrus and we’re quite happy and we’re really satisfied with the FPS that we got on the notebook.

All of the games are set in 1080p at ultra settings 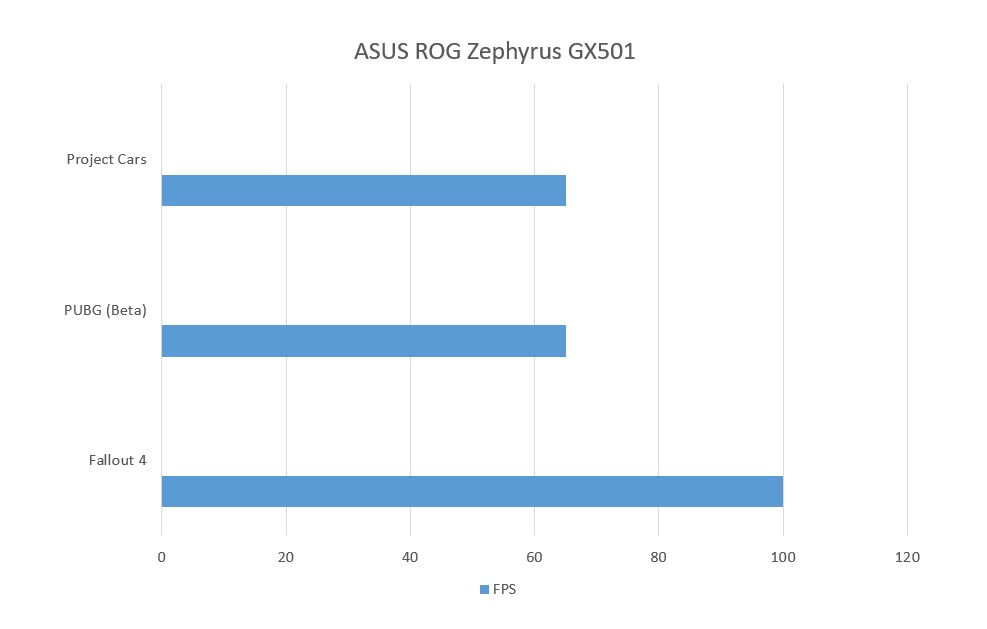 We tested PUBG on the ASUS ROG Zephyrus when it was still in beta so you can expect better frame rates now. In Project Cars and Fallout 4, I barely experience frame drops and I was really happy with the FPS that I got in both games. The ASUS ROG Zephyrus GX501 has definitely changed the gaming notebook industry. The Taiwanese company has introduced that it is possible to create a thin notebook and yet deliver a powerful hardware inside. This thin and light gaming notebook might not break your back but it will definitely break your bank. The Nvidia GTX 1080 Max-Q variant will cost you Php179,995. So who is this laptop for? Well, if you’re the type of person who’s always away and you always bring your notebook with you and you want a powerful gaming laptop then the ASUS ROG Zephyrus is perfect for you.