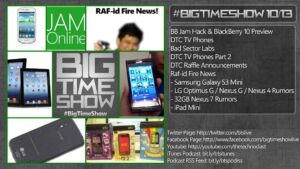 Last Saturday, we had another show and we have just had a lot of very interesting topics this week. This week we talked about Blackberry 10, DTC TV Phones, Some small news like the Samsung Galaxy S3 Mini, the rumored LG Nexus Phone, Nexus 7 upgrade rumors and of course the iPad Mini.  Oh and I almost forgot to tell you guys, Mr. Alan Wong with Rafael Oca are live at the Blackberry Jam Hackathon and they just showed us the Blackberry 10 which is expected to be release early next year. He just showed a Blackberry 10 device and showed some of the nifty features that can be found on the BB10 OS. Mr. NFC also invited some guys at the hackathon and we asked them about the apps they made. After that, I showed some of DTC Mobile TV phones that I’ll be raffling out soon (hurray to that!). So why don’t you just check out the #BigTimeShow and the podcast links after the break?

So that’s it for this week. Be sure to check out our previous episodes at Youtube and subscribe to The Technoclast’s YouTube Channel or subscribe to our podcast at iTunes (Awww yeah! we’re on iTunes!). So if you have some time to spare for us, join us every Saturday night at Big Time Show!