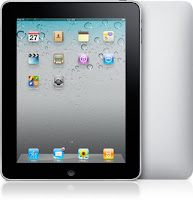 Many people ask this question, “Where can we find the cheapest iPad in the Philippines?”.  iPad & the upcoming iPad 2 or some people say, “the giant iPod touch” is listed as number one on my Gadget Wishlist. Because of this magical device, a lot of companies was inspired to make one too. Some of those tablets fail, some of them are too cool and some of those tablets mixed up with a landline. But most people still prefer the Apple iPad because.

#1 It uses iOS which offers a lot of apps and games on the appstore.
#2 It is made Apple, Bragging rights baby!
Now the question is, where can you find the cheapest iPad in the Philippines. There are a lot of stores selling cheap iPads but I still prefer Kimstore. I bought my iPod touch there a few months ago. Aside from Apple products they’re selling Game Consoles, Cameras & a lotta more.
In Apple Online Store the Apple iPad starts at P23,990.00. Apple Resellers sells iPad at the same price too. I don’t know if Charlie from PhilMUG sells iPad but if you want a discounted Mac, just send a private message to Charlie and you can get a little discount from him.
Kimstore sells Apple iPad at these prices: