The Asus Zenfone series smartphones are one of the hottest smartphone in the market and finally, the ASUS Zenfone 2 will be arriving in the country today and we got the red Asus Zenfone 2 ZE551ML with a 32GB storage before the local launch. So what do I think about this smartphone? Check out my review of the smartphone below. The small power button of the Zenfone 2 is placed at the top of the phone which is a little bit hard to reach but thankfully, the Asus Zenfone 2 has a double tap to wake feature so you don’t have to press the power button anymore just to wake the smartphone from sleep. It’s an awesome feature that you can also find on other smartphones but on the Asus Zenfone 2, the double tap to wake feature works better than other smartphones. Why? Because there are no accidental wake ups when the smartphone is in your pocket. At the front, the Asus Zenfone 2 looks very similar to the Zenfone 5 but this one has smaller bezels. There’s the 3 capacitive buttons below the display but unfortunately, these buttons aren’t backlit buttons. That’s why you’ll struggle figuring out where the buttons are when you’re at your bed, stalking your crush or just reading a story at Wattpad. There’s USB On-the-go on the ASUS Zenfone 2 ZE551ML if you need more space but I doubt that because most of you guys will already be satisfied with the 32GB/64GB internal storage of the Zenfone 2 along with the MicroSD card slot inside that supports up to 64GB. The speaker grill of the ASUS Zenfone 2 is placed at the back and it’s very crisp and clear however it isn’t that loud but don’t worry, the speaker is still good. The battery? it has improved from its predecessor. The smartphone can now last up to a day or two on my use. The ASUS Zenfone 2 ZE551ML got a 5.5-inch Full HD display. It isn’t the best class but it does the job well. The screen to body to ratio has improved to 72% which makes the phone packs almost the same size of the ASUS Zenfone 5 but with a bigger and better display. Unlike most 2015 flagship smartphones that pack a Quad HD display, the ASUS Zenfone 2 got a 1920×1080 resolution and the display looks good. The colors are good and it doesn’t look oversaturated. Outside, the display performs really well. The outside visibility was good and I don’t have any complaints with it ASUS ZenFone 2 still packs the ZenUI but this time, the ASUS Zenfone 2 is now running on Android 5.0 Lollipop. Although there are some itsy bitsy bugs on Android 5.0 Lollipop, the ZenUI works pretty well and isn’t sluggish unlike other launchers. There are bloatwares on the ASUS ZenFone 2 like ZenCircle which is a social app for Zenfone users but some of them are really useful like Photocollage and PC Link in where you could duplicate the display of your smartphone to your PC.

Another thing that I really like on the ASUS Zenfone 2 is the customization. There’s no need to root your device or download an app to change the theme of your smartphone because the ZenFone 2 allows you to download and change not just your themes but also your fonts on the homescreen. So far, the ASUS Zenfone 2 is one of the most customizable smartphone that I’ve tried. However, one thing I noticed in the ASUS Zenfone 2 is that the elements and icons are bigger in the Zenfone 2 but it’s not a really annoying and you can adjust these things on the Zenfone 2 but for those people who are too lazy to change the settings of their phones, the larger the elements, the bigger space they took on the screen and these spaces can be used for more features.

When it comes to games, the ASUS Zenfone 2 doesn’t disappoint. The ZenFone 2 that we’re reviewing right now packs a 64-bit 2.3GHz Intel Atom Quad-Core processor, 4GB Dual-Channel RAM, and 32GB Internal storage. We rarely see a smartphone using an Intel Atom processor especially using the Moorefield family but it is more rare to see a smartphone pack a 4GB of RAM. 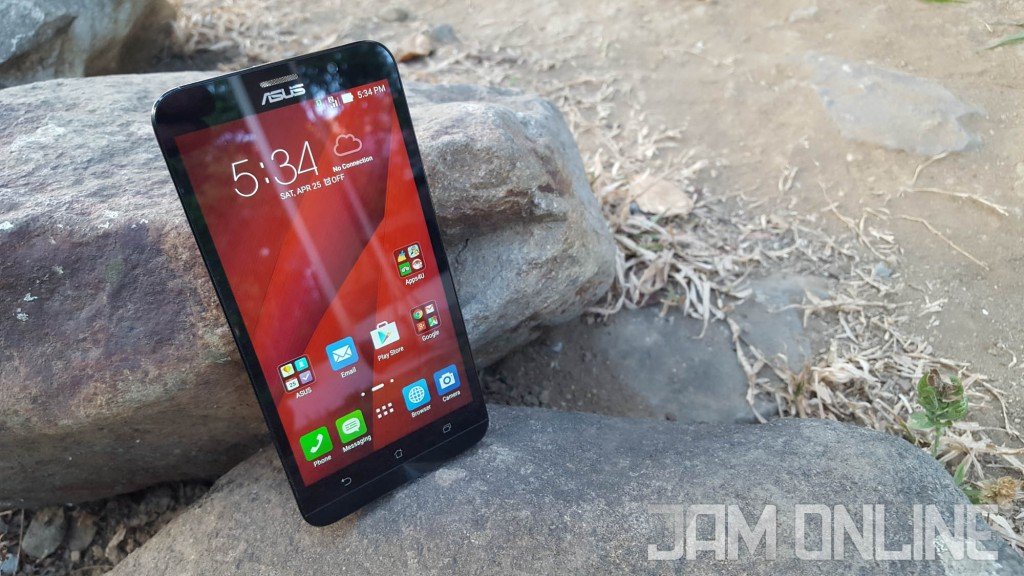 If you’re simply buying a smartphone and your budget can reach the ZenFone 2’s price range, then better check this one out. Why? Because the ZenFone 2 is expected to be below P17,000 and yes, that’s for the 2.3GHz/4GB/64GB variant already. The ASUS ZenFone 2 combines the best hardware and the best price. This may not be the best smartphone in the market when it comes to performance but I’m pretty sure the ASUS ZenFone 2 is the best value-for-money smartphone that you can buy. I highly recommend you to buy an Asus ZenFone 2 if you’re budget is below P17,000.