There a lot of laptops that now offers their own unique features but in the ultrabooks scene, the thinnest one is always the winner. Today, we will review one of my favourite notebooks from ASUS ever, the ASUS Zenbook S. 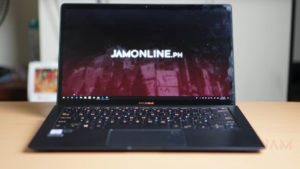 What makes the ASUS Zenbook S unique is its design. It might not be the thinnest of all but this is definitely ASUS’ most beautiful notebook that they’ve ever created. For starters, the ASUS Zenbook S only weighs 1kg it’s really thin at 12.9mm. The body? It’s a unibody all-metal construction which is already expected at a price like this and also at its category. 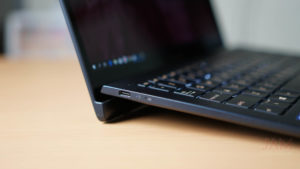 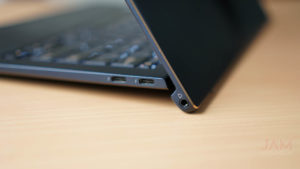 When it comes to connectivity, the ASUS Zenbook S comes with three USB-C ports in which one of them is dedicated to power while the other two is a Thunderbolt 3 port that allows 40Gbps data transfer which basically allows you to plug in an external GPU so you can use the notebook for gaming. But in case you need to plug in an HDMI or a USB-A port then you can use the included ASUS mini dock that houses a USB-C port for charging, HDMI, and also a USB-A. 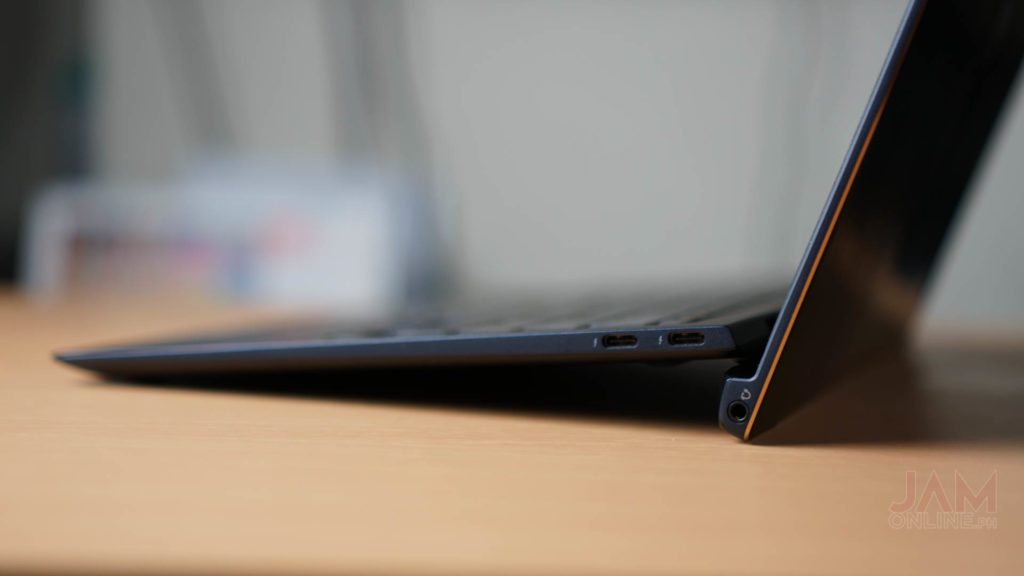 One of its unique feats is the ErgoLift hinge which basically inclines the keyboard laptop into an ergonomic typing which also allowed a better airflow to the notebook. In our experience, we did feel that the ASUS Zenbook S has a cooler airflow especially for its thickness and you can really feel that the air is really getting out of the notebook. The elevation of the keyboard of the notebook also helps amplify the audio of the Asus Zenbook S which makes the notebook’s audio louder. Speaking of audio, it has a Harman/Kardon speaker inside and I’m pretty confident to say that you will definitely love the audio of the notebook for its size. Most ultrathin notebooks suffer from having a terrible keyboard but the ASUS Zenbook S begs to differ as the Chiclet designed keyboard of the ASUS Zenbook S features a really good tactile feel that feels similar to a normal notebook and a comfortable travel distance, unlike the Macbook. The elevation of the keyboard also helps which makes the notebook’s keyboard a near perfect one. There’s the webcam too at the top of the display and it’s already decent enough to use for Skype and messenger. It can record 720p videos which are just decent enough.

A sharp and touchscreen display The ASUS Zenbook S features an ultra HD display with a touchscreen and good heavens, the display of the ASUS Zenbook S is really sharp and the colors are really vivid, however, I felt that there was a need for more brightness on the notebook especially when I’m using the notebook outside. Nonetheless, I still like it overall

Ultrathin but still powerful inside

One of the best things about the ASUS Zenbook S is despite its thin form factor, ASUS was able to fit in an Intel Core i7-8550U processor inside, 512GB SSD, and an 8GB RAM. As expected, there’s no dedicated or discrete GPU inside but don’t worry because the i7 processor is already enough if you’re just into playing light and casual games but it is already powerful enough to run a lot of Google Chrome tabs and some casual Adobe Photoshop. I got a pretty decent score at PC Mark as seen below however, 3DMark crashes whenever I run it on the notebook. When it comes to gaming, games such as Cities Skylines would run well even at 1080p at more than 40fps depending on the size of the city. In Overwatch, I was able to run the game at 1080p at low settings with an average of 42fps. That’s not pretty bad and that’s really playable. So good job for that HD 620 GPU of the notebook. Despite that, I still suggest that you stay away from the ASUS Zenbook S if you’re into performance usage or gaming as the ASUS Zenbook S throttles down when it comes to gaming and rendering because the elevated keyboard with the ErgoLift Hinge isn’t enough to bring you a cooler experience when doing heavy tasks. ASUS promises that the ASUS Zenbook S will deliver a battery life of up to 13.5 hours however, we were only able to get a battery life of 8 and a half hours of normal web browsing and light editing but that’s still good considering the form factor and the specifications of the laptop. It also features a fast charging and I was able to charge the notebook at 50% at around 45 minutes. The ASUS Zenbook S is one of the best notebooks that the company has ever released. The notebook combines the beauty and power into one as the ASUS Zenbook S features a thin and sleek design with an Ergolift hinge and also an Intel Core i7-8550U processor inside. Typing on the keyboard is a breeze too as it packs one of the best keyboards that I’ve tried in its category. The battery life of the notebook didn’t reached what ASUS has promised but it’s still pretty long considering its power inside.

While we love the powerful processor inside, I noticed that there was a throttling in performance when you’re in heavy usage but that’s already expected since the notebook is already thin.