Inside the smartphone, there’s not much to see. There’s the 18W charger with USB-C to USB-A cable and of course, there’s the manual but unfortunately, there’s no case included on the realme narzo 20. 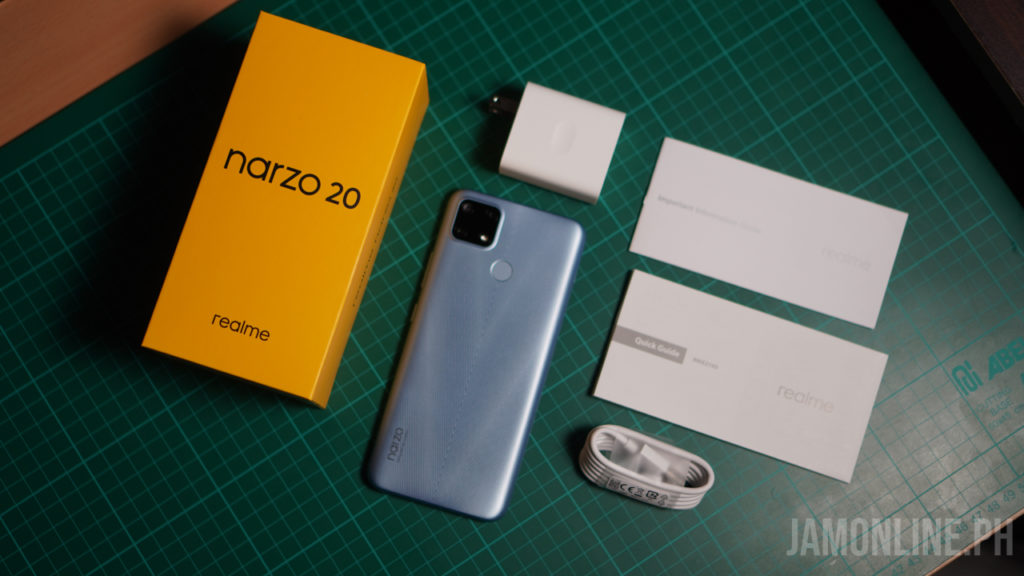 This won’t be a conflict with their current lineup as the realme narzo 20 will only be available via Lazada and of course, the realme narzo 20 still packs the features that we love on realme smartphones including a large battery, large display, and also a tough design. First, the design looks similar to most realme smartphones but this time, we’re getting here a textured back with a V reflection depending on the lighting that is passing through the smartphone. Of course, it’s plastic but it does feel solid and the textured back adds to the grip of the smartphone. At the back is where you can also find the fingerprint scanner which works just fine and on the front, there’s the 6.5-inch mini-drop fullscreen display with pretty colors. It’s only at HD+ which means that it won’t be as sharp as other displays but it will work just fine for me. Below is where you can find the USB-C port along with the 3.5mm headphone jack and it does support 18w charging so you don’t have to be worried about charging the smartphone for a long time. For the camera, we got here a 48MP main camera at the back along with the 8MP ultra wide-angle lens and a macro camera and it does work just fine and then there’s the 8MP selfie camera too if you love taking selfies.