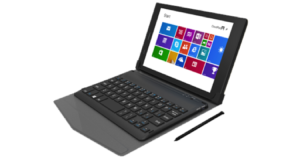 Cloudfone has also join the local Windows race with their newest tablet, the Cloudfone Epic 8.0. It’s an 8-inch Windows 8.1 tablet which means that you can run apps and games like Warcraft III & Microsoft Office 2013 and yes, Cloudfone Epic 8.0 is available in variety of vivid colors. Inside is a 1.8 GHz Quad-Core Intel Atom processor and a 1GB of RAM. Unfortunately, there’s only 16GB of Internal storage which is quite small for a Windows tablet.

Compared to other Windows 8.1 tablets, this one packs bluetooth keyboard and a smart pen. I don’t know yet how the smart pen works but based on my experience, it is much easier to use a Windows 8.1 tablet when there’s a stylus. Cloudfone Epic 8.0 is priced at P9,999