If you’re buying the notebook, it’s a must that you have the ASUS ROG XG Mobile with you and yes, the combination of the notebook and also the XG Mobile will cost you an arm and a leg but with this duo, you’ll get a really powerful notebook but still features an ultra-slim notebook. How thin? Only 0.62” thick. Yep. That slim. 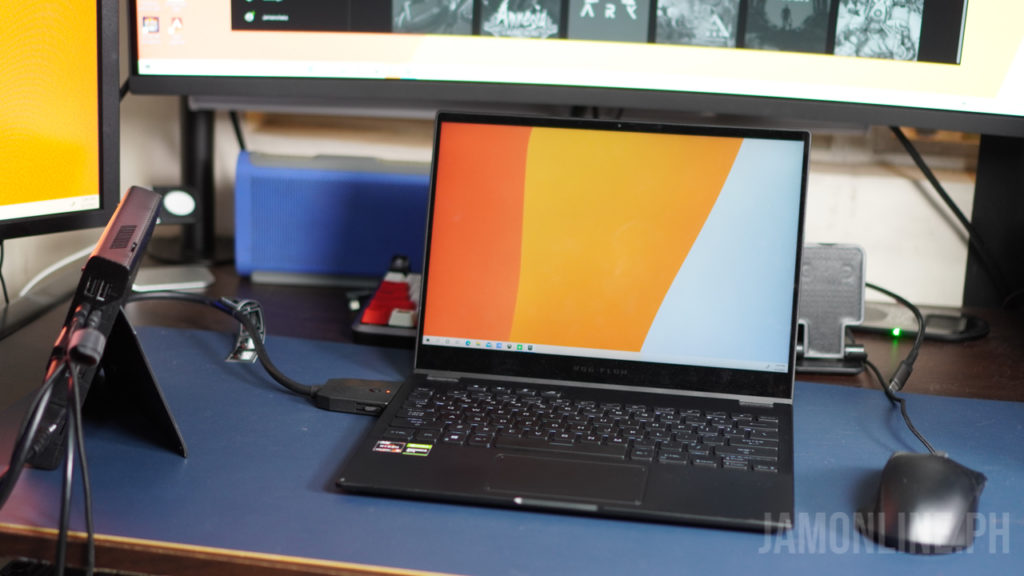 Unlike the other ASUS ROG notebooks that we’ve seen before. The ASUS ROG Flow X13 is also a convertible notebook that you can twist up to 360-degrees. This makes the notebook perfect not just for gaming but also for productivity. There’s a touchscreen display too and it supports ASUS Stylus so you can sign your documents on the notebook or draw with it. For the ports, there’s not much to see on this one but we got here a USB 3.2 Gen 2 Type-A along with the USB 3.2 Gen 2 Type-C with DP1.4 and PD on one side and also a proprietary PCIe 3.0 x8 and USB 3.2 Gen 2 Type-C on the other side along with the HDMI 2.0b and also the 3.5mm audio combo jack. This is already perfect for me as I only need one USB Type-A port most of the time when I’m outside for my mouse or drive then I can use the USB type-C for other stuff. Unfortunately, no card readers here for content creators. Another cool thing about the notebook is the power button also serves as the fingerprint scanner on the smartphone unfortunately, there’s no IR camera on this one. 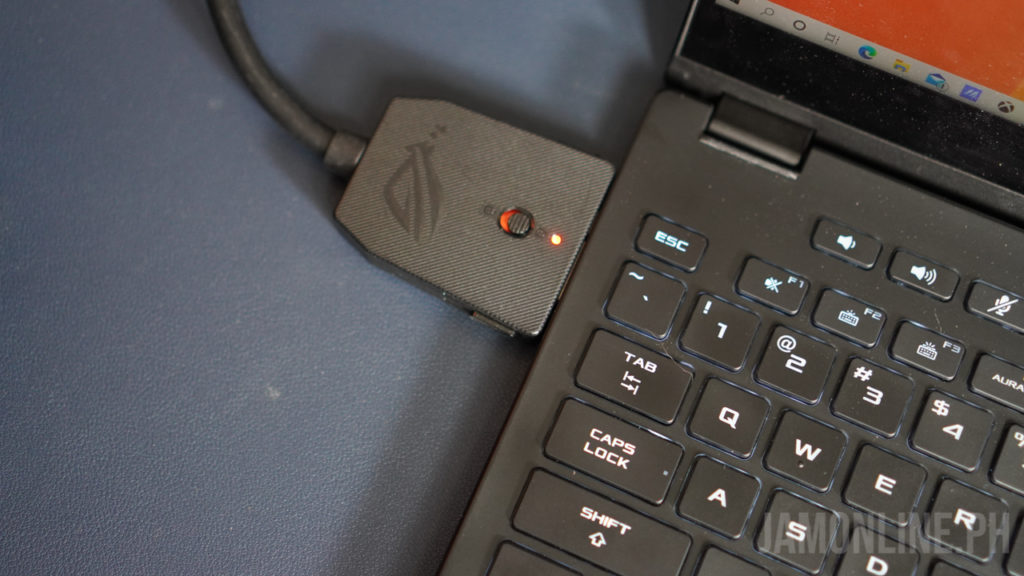 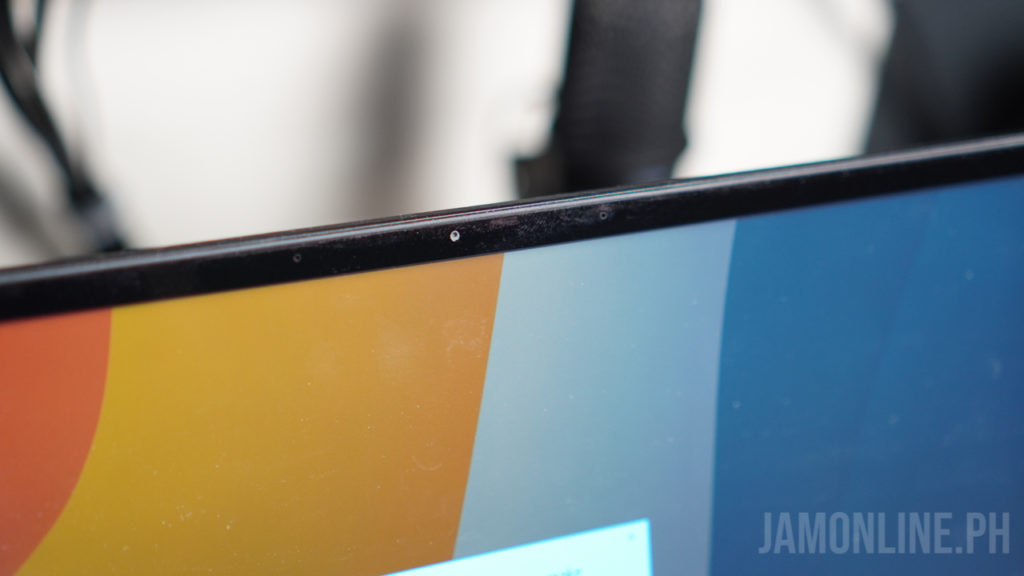 The USB Type-C port on the notebook is also the port for the charger as the notebook comes with a 100W USB-C charger. But once you have the ROG XG Mobile, you don’t have to use that one anymore. For watching videos, you would definitely appreciate the speaker as this one offers a pretty good audio quality but I still suggest that you use your headphones or speakers for this one to get better quality. The keyboard unmistakably came from ASUS ROG and as for the experience, well, this one is overall pretty good even for gaming. There’s enough travel distance on this one and the strokes were pretty responsive on this one so whether you’re typing or you’re gaming, the keyboard of this one won’t be a problem to you. There’s a white backlight on the keyboard too and unfortunately, there are no RGB lights on the keyboard but you can still customize the lighting effects on the ASUS ROG Flow X13. There are dedicated buttons too for the volume, mic button, and for the ROG Armoury crate app in where you can see every status that you need on the notebook. 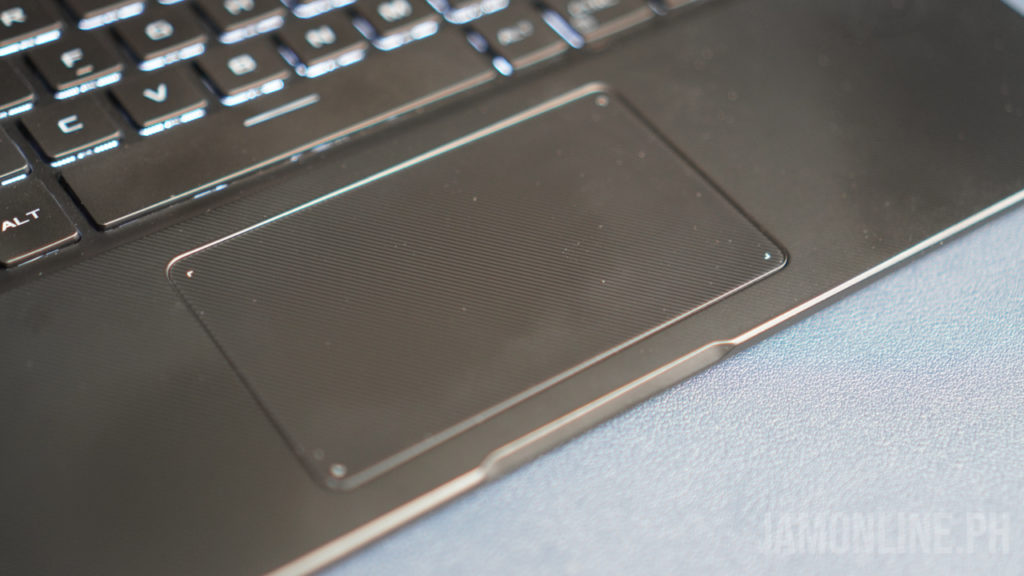 For the touchpad, the size is just a decent size. It’s enough for normal usage for work and office. It’s responsive and also precise but it isn’t glass so it isn’t the best touchpad but just a fine one for your everyday use of the notebook. 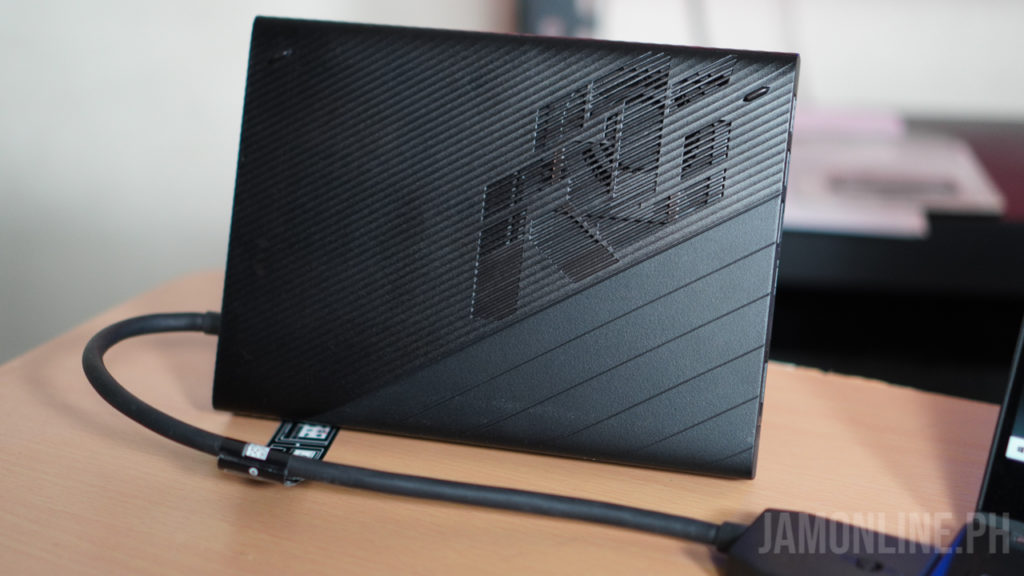 Unlike other eGPU, this one is portable as this one is lightweight at 1kg and the dimensions is really small at 20.8 x15.5 x 2.96 cm. There’s a fan on the XG Mobile that helps in the thermal of the XG Mobile in case you’re playing games or doing some heavy tasks on the notebook. To improve it, even more, there’s a built-in stand too with some cool design on this one. The ASUS ROG Flow X13’s display is a creator’s dream. There’s the 4K panel on this one with a 60Hz refresh rate and the colors were pretty good and again, this one is a touchscreen display. It’s Pantone Validated too which is why editing photos and videos on the display of the laptop was really good.

Since we got here more accurate colors and a 4K panel, this one is more optimized for content creation rather than gaming as we only got here a 60Hz refresh rate which isn’t ideal for a gaming notebook. There’s a 16:10 aspect ratio too which is perfect for productivity use and more space for windows for me instead of 16:9. 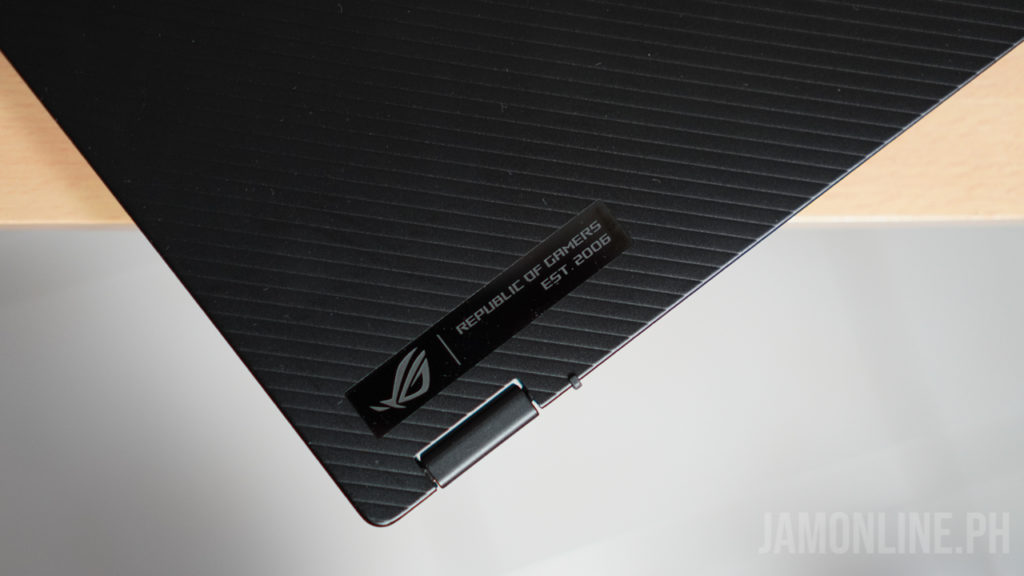 The ASUS ROG Flow X13 comes with some preinstalled apps but the one that you would really use is the Armoury crate. You can add profiles for the notebook and check out the resources like CPU usage, GPU, Usage, memory, and even storage. But the most useful for me is that I can control the performance of the notebook here and its fans.

Since this is ASUS, we also got Aura Sync and again, you can control the keyboard lighting on the notebook. Here’s the interesting part on the notebook – the performance. The one that we got comes with AMD Ryzen 9 5800HS for the processor and it comes with a dedicated GTX 1650 Max-Q GPU and for its size, and thickness, the ASUS ROG Flow X13’s GPU is already pretty good and as for the thermals, it isn’t the best one but it doesn’t get too uncomfortably hot when in normal usage. As for the performance, well, it’s really good even on the GTX 1650 Max-Q. Check out the benchmarks that we got on different applications. 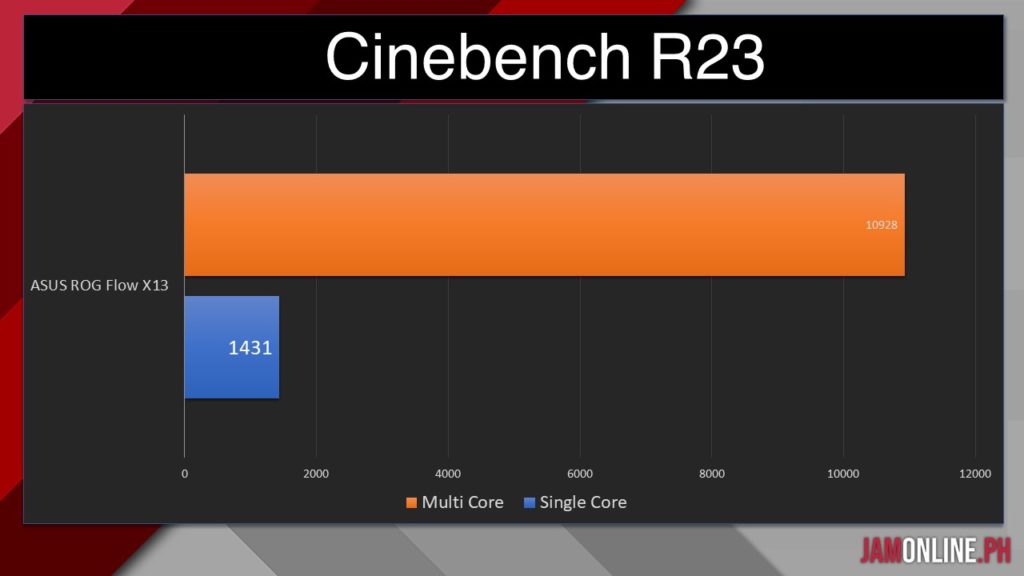 In Cinebench R23, we can clearly see that the AMD Ryzen 9 5900HS processor inside the notebook is clearly powerful and it can beat even other desktop processors that are available in the market right now. This one looks promising. 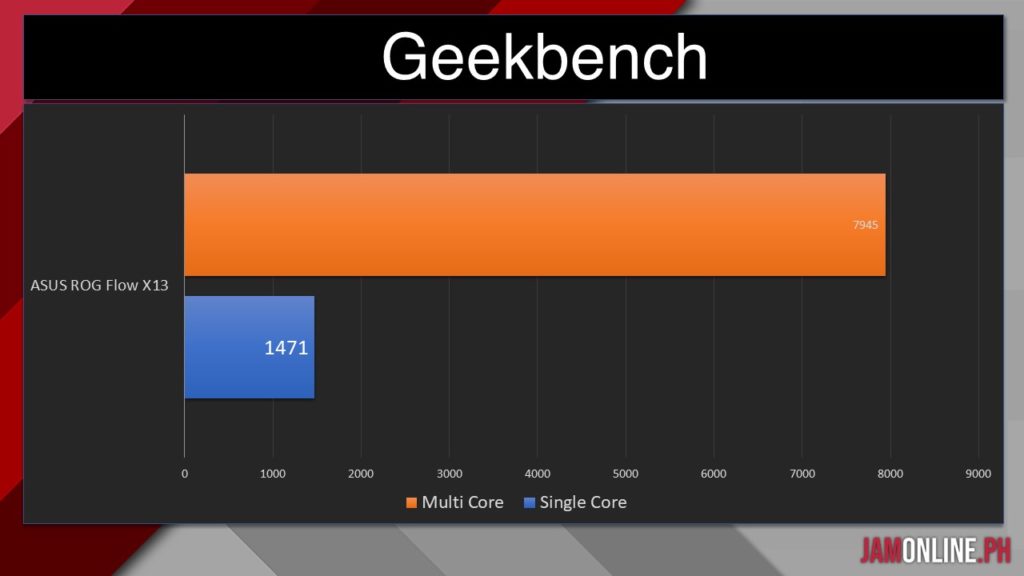 In GeekBench, the ASUS ROG Flow X13 further proves that the processor inside it is really powerful as we got a really high score.

For gaming, we tested it at different games and the difference between the GTX 1650 and the RTX 3080 is just drastic. So if you’re planning on gaming on this one, be sure to get an XG mobile for the ASUS ROG Flow X13.

The performance of the notebook has also improved when I use it in tent mode instead of laptop mode as the airflow is way better and it offers better thermals thus, improving performance. Overall, the ASUS ROG Flow X13 is promising. It’s the future of slim gaming notebooks. The XG Mobile is a good start and we might see more notebooks that will support this external GPU. The form factor of the notebook is flexible whether you’re a gamer or you just want to use it for daily usage and it’s jam-packed with everything that we love on a notebook – stylish, powerful, and also portable.

The ASUS ROG Flow X13 might come in a complete package but this one is still a little bit expensive for some people as the notebook doesn’t come with the XG Mobile yet. But again, it’s a great laptop and I definitely love using this one. 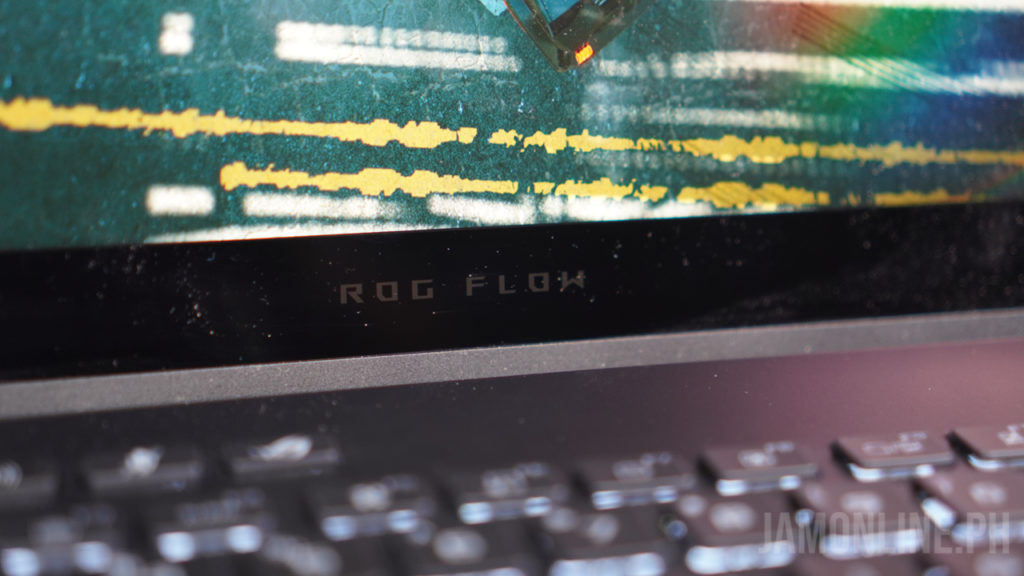