One of the premium laptops out there in the market is the ASUS ROG Zephyrus M16 and it’s just one of the powerful notebooks from ASUS. For the Zephyrus M16, the notebook comes with an Intel Core i9-11900H processor along with the RTX 3070 inside it. Aside from that, the notebook also comes with a large 16” display which makes it a great gaming notebook made for an on-the-go productivity workhouse.

Personally, I’m so excited to review this notebook because the 11th Generation Intel Core H45 processors brings a lot of possibilities including a desktop-class performance on a laptop which will be great for gaming and also for content creation.

So why is it exciting? First, it brings the new Willow Cove Core which is based on 10nm SuperFin tech architecture and it offers better performance and efficiency compared to most chips in the gaming market right now which is why the chip inside the ASUS ROG Zephyrus M16 can compete in the desktop-class segment.

It also features 20 PCIe lanes directed to the CPU which allows faster speeds and it also comes with DDR-3200 for a high bandwidth memory for speeds up to 3200MT/s. For us content creators, we would really enjoy the Thunderbolt 4 port for a faster bandwidth speed of up to 40GB/s for accessories. This means that if you have accessories like external storage, you can transfer files easily and faster than ever.

It also features an Intel Wi-Fi 6E inside which gives us a better wireless internet connection that can handle more bandwidth and better latency for games. Right now, the 11th Gen Intel Core H45 processors are available in different gaming laptop brands like Acer, Asus, Lenovo Dell, MSI and Gigabyte.

No-nonsense design made for gaming As for the chassis, it does have a chassis that fits for a 15” notebook with a 16:10 display but actually, you can find here a 16” display inside thanks to the thin bezels of the notebook and as for the lid, this one comes with a dot matrix design with a prismatic shine depending on the angle. This looks good but not as good as the one on AniMe Matrix LED design on the ROG G series.

As for the palm rest and the look of the notebook, it comes with a matte rubber-like texture that might attract a few oils and smudges but it’s easy to clean and wipe off the notebook. There is a no-nonsense design on the notebook and I do like the large touchpad of the notebook which is perfect for doing some productivity work on the ASUS ROG Zephyrus M16. As for the grills and cooling on this one, the ASUS ROG Zephyrus M16 can be quiet but it can also be powerful depending on what you need for the gaming notebook. As for the grills, they are facing on the sides and also on the display of the notebook which tends to result in having a hotter display in the process.

With its dimension of 35.5 x 24.3 x 1.99 cm at 1.9kg, I found this notebook interesting to bring anywhere. It’s not the most portable or compact gaming laptop out there but it’s definitely portable enough for a 16” notebook.

A fine keyboard and touchpad The ASUS Zephyrus M16 features a keyboard that is fine to use whether you want it for gaming or for casual or office use. It does offer pretty good feedback and the chiclet-style and the size of the keycaps feel great to type on. There’s RGB backlighting too that you can customize using the Armoury crate app of the notebook. As for the layout of the keyboard, it’s actually pretty good as the keys are fine but the sizes for the arrow keys are small. Aside from that, there are buttons dedicated for the Armoury crate app, the microphone button, and also the volume button just like the other ROG devices. When it comes to the touchpad of the notebook, it’s actually pretty good as the size of this one is big and it’s very responsive in my usage. Clicking on the touchpad was comfortable as well and it’s definitely one of the best touchpads that I have on a gaming notebook.

Excellent display for gaming and productivity The ASUS ROG Zephyrus M16 features a 16:10 display along with a resolution of 2560×1600 but the main highlight of the display is the 165Hz refresh rate with a 3ms refresh rate. This means that the notebook can display a smoother and better refresh rate compared to most gaming notebooks out there but also offers a 2.5K resolution. Not just that because this one also comes with an IPS-level display with 100% DCI-P3 level which is why the colors of this one are good and it’s perfect if you love editing videos or photos on the ASUS ROG Zephyrus M16. If we’re talking about a notebook with an Intel Core i9 processor and also a 100W Nvidia GeForce RTX 3070 GPU, a lot of you might think that the notebook won’t last that long on normal usage. I was surprised that the 90WHr can last up to 6 hours on normal usage of browsing the internet and a little bit of work but if you’re planning on using the laptop for gaming, you can expect up to 2 hours on the notebook. 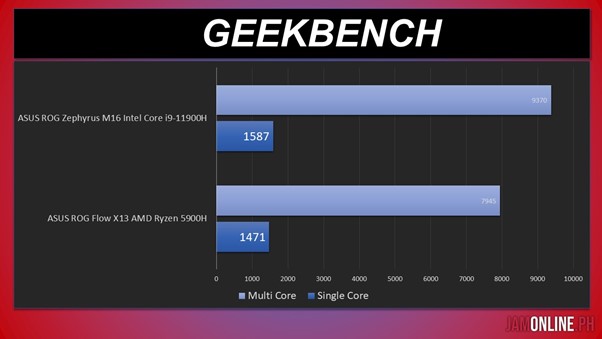 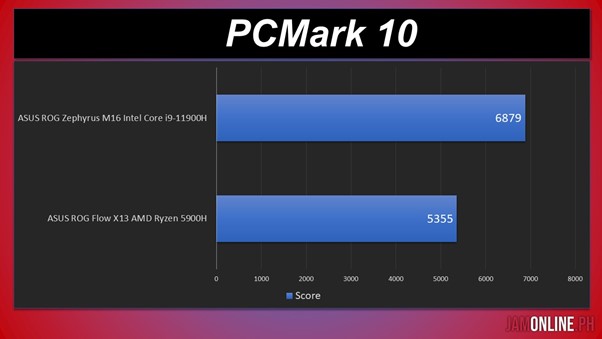 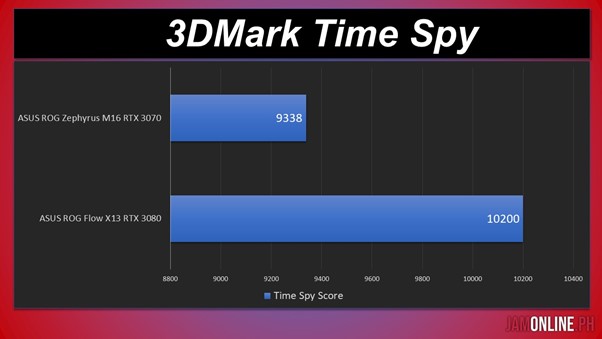 The RTX 3070 GPU inside the ASUS ROG Zephyrus M16 just placed well below the RTX 3080 that we’ve tested on the ASUS ROG Flow X13 before but the numbers that we got on the Zephyrus M16 definitely gives us a clue that this one is a very powerful laptop. Not just that, the CPU score also showed that the Intel Core i9-11900H processor is really a beast.

In Shadow of the Tomb Raider, we got really good framerates when we ran the benchmark on the notebook. In Horizon Zero Dawn, the score of the ASUS ROG Zephyrus M16 is pretty high too as we got here an average FPS of 97 on the ultimate quality. The SSD inside the ASUS ROG Zephyrus M16 is pretty fast too as we got here a 2TB M.2 NVMe PCIe 4.0 SSD inside from Samsung and man, we were able to get up to 7067 MB/s and 5234 MB/s on read and write speeds respectively which is insanely fast so whether you’re installing or transferring files on the notebook, that won’t be a problem for you. The temps were pretty good on the notebook overall thanks to the handling of the Intel Core i9-11900H processor inside. Not only that this processor is good at handling temperatures but the Tiger Lake processor inside the ASUS ROG Zephyrus M16 also offers a lot of features including WiFi 6E and also a Thunderbolt 4 that offers up to 40Gbps bandwidth. It also supports PCIe Gen 4 SSD that’s why the SSD speeds in the notebook were excellent.

The PCIe Gen 4 SSD compatibility thanks to the 11th Generation Intel Core i9-11900H processor inside it. This also means that the laptop is capable to run the best and fastest SSDs in the market. These ultra-fast PCIe Gen 4 SSD means that these notebooks will be able to load games faster and transfer media files for content creators. 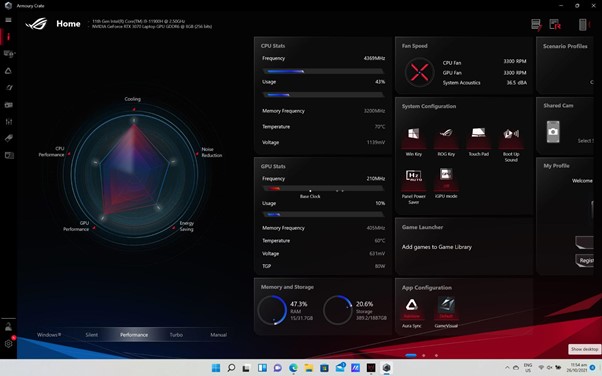 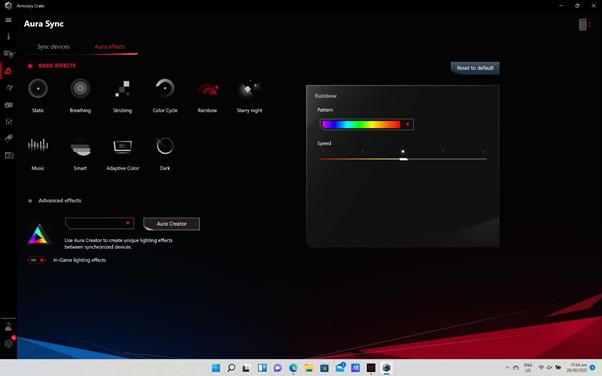 It also gives you the full outlook on the performance of your notebook and you can even set a profile depending on what you want for your workflow. It’s a cool application and it’s very user-friendly even for first-time users of gaming notebooks. 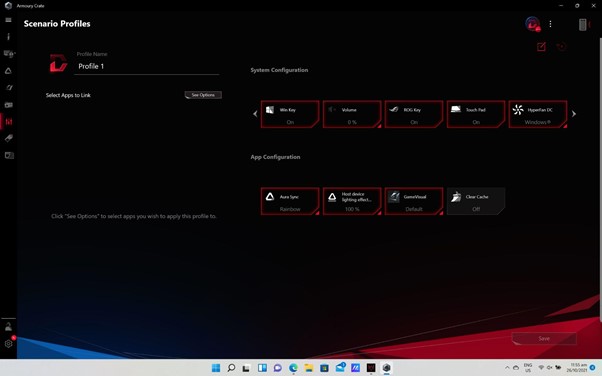 Adjusting the performance of the CPU and GPU is pretty easy on this one but of course, you can also manually adjust the colors of the RGB keyboard of the notebook depending on your preference. It’s not just aesthetics because the notebook also comes with a 94% screen-to-body ratio along with a 165Hz refresh rate and also a 3ms latency on the display of the notebook which is perfect for gaming and because this one is 100% DCI-P3, it’s also perfect for work and productivity.

The main highlight in this laptop is the powerful Intel Core i9-9900H processor inside which can perform at a desktop level and yet provide efficient power and also good temperatures. It also provides brand new features that we haven’t seen before on other laptops including PCIe Gen 4 SSD and WiFi 6.

As for the cons, well, not that much as we’re getting here a pretty powerful notebook with pretty good hardware inside however, it will cost you a lot as the ASUS ROG Zephyrus M16 starts at Php129,995. You can get this Intel Core H45 running laptop at Abenson, Electroworld, Gigahertz, Lazada, Octagon, PC Express, Silicon Valley, and Villman.