Huawei has been busy releasing different products aside from smartphones recently and one of them is the Huawei Matebook 14s. This is an Intel-powered notebook and it comes with some surprises including Huawei Mobile Services inside. What do I think about the laptop? Check it out in our review below. Without a doubt, Huawei makes elegant and premium looking notebooks since the first MateBook to come out in the Philippines and with the Huawei MateBook 14s, the design language of the notebook is the same. First, there’s the aluminum alloy body design on this notebook and the one that we got comes in Space Gray. Just like the other MateBooks, this one comes with a premium and clean look as well and some might say that it resembles the Macbooks which isn’t bad.

As for the weight, the notebook weighs 1.43kg along with a 16.7mm thickness. That’s not bad, however it’s not the lightest laptop as well but the notebook is portable enough to be brought on my messenger bag anywhere. Onto the ports, we got here a different setup as we now have 2x USB-C ports and for the Intel Core i7 variant, one of the ports is a Thunderbolt 4 port so you can plug in your external GPUs or any supported devices. As always, the notebook comes with a USB-C charger so you must allot one of the ports for that. Aside from that, there’s the HDMI, audio combo jack, and also a USB 3.2 Gen 1 Type-A port which is perfect for your mouse or other devices that still use USB Type-A. Surprisingly, they’ve moved the webcam of the laptop to the top of the display so gone are the days of Huawei laptops with a recessed webcam that makes you look awkward at zoom and on Microsoft teams. 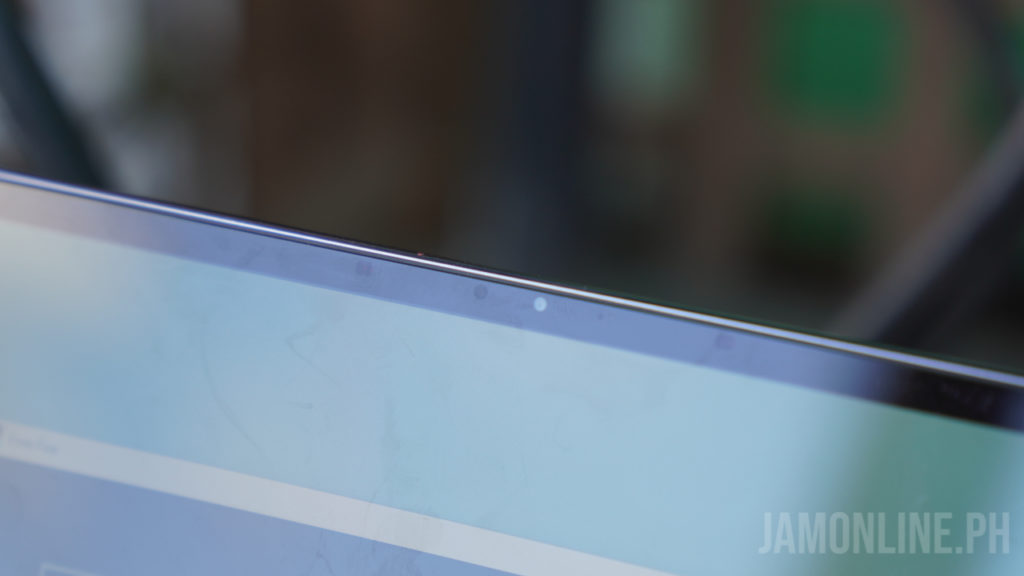 As for the sound of the notebook, they were fine for a notebook, and it will perform fine if you’re watching a movie on Netflix or when you’re listening to vlogs on YouTube. Again, there’s no recessed webcam on the notebook so they replaced it with a button dedicated for speech to talk which is awesome if you’re writing something long or you want to take notes. As for the layout of the Huawei MateBook 14s’ keyboard, the chiclet style keyboard was fine and easy to type on and the size of the keys were good including the arrow keys which has a normal size for the left and right button but a smaller size for the up and down button. 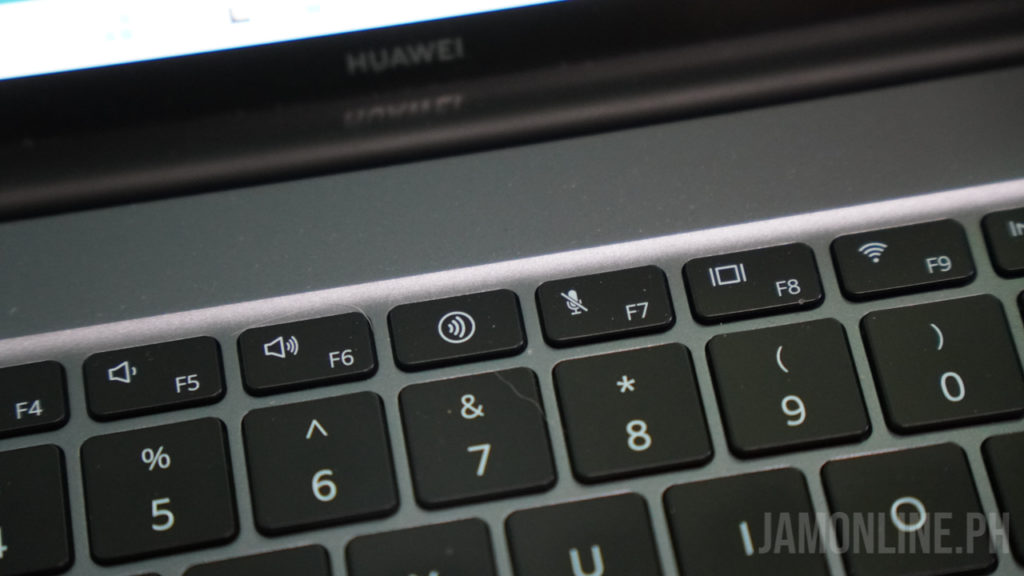 The Huawei MateBook 14s also comes with a backlit keyboard, so everything was bright, and the key travel was surprisingly good and the feedback on every type were good as well. As for the touchpad, the size was just fine and it was very responsive as well. One of its highlighted features is the display. There’s the 14” touchscreen display in here with a 2.5K resolution. There’s a 100% sRGB colour space as well and a brightness up to 400 nits. In my usage, I did enjoy using the notebook when I was in a cafe and despite the direct sunlight. I did notice the glare due to the glossy display, but the brightness was good enough for outside usage.

Aside from the sharp 2.5K resolution that we got in here, the notebook also comes in 90Hz which comes in handy when playing some casual games when I’m away at home including Valorant. Basically with the 90Hz refresh rate, I can get a smoother and better framerate on the notebook compared to most thin notebooks in the market right now. One of the advantages of the Huawei MateBook 14s is that the laptop uses an 11th Generation Intel Core Processor inside but it’s no ordinary Intel processor because this one uses an Intel Core i7-11300H processor. This is different from the U-series processor as the H-series offers a better and faster performance.

In our benchmarks, we got noticeably higher scores compared to the U series processors from Intel so basically, if you’re running heavy and intensive apps, the laptop can handle it even faster. Check out the scores that we got on the Huawei MateBook 14s

In Cinebench R23, the notebook does perform below the Intel Core i7-1165G7 processor in single-core but it is significantly better in multi-core which gives us an impression that the notebook can perform faster and better on multi-core optimized apps and games. 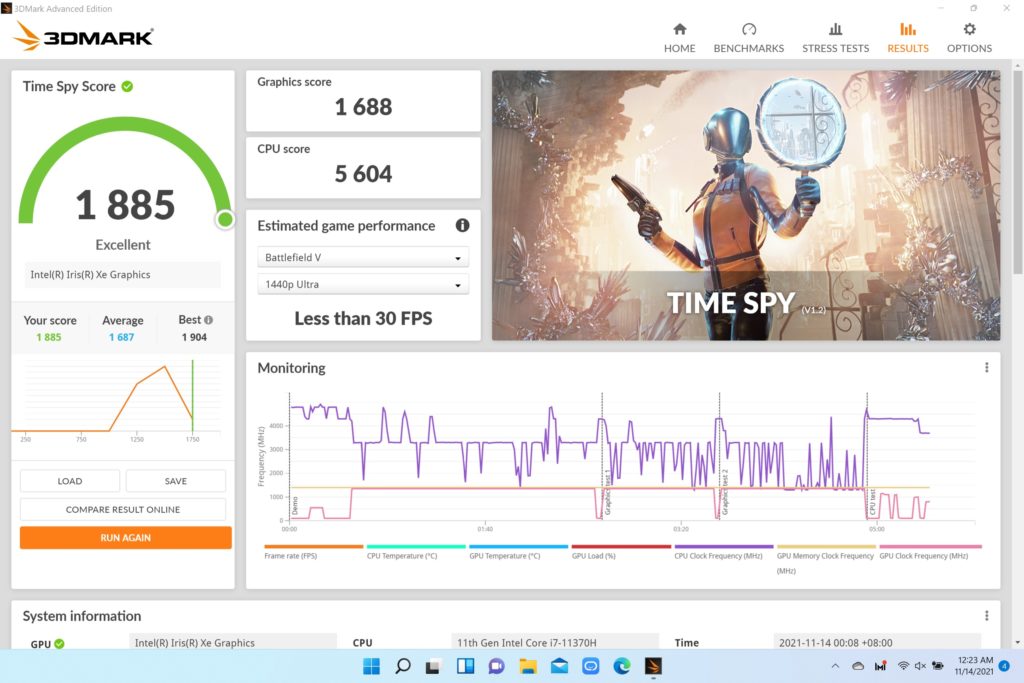 In CrystalDiskMark, the notebook managed to get the speeds just right for a PCIe 3.0 SSD inside it. Not bad.

When it comes to gaming, I was able to run different games ranging from New World up to Horizon Zero Dawn. Here are the benchmarks scores that I got with these games and yes, they were both playable in the notebook (Just don’t expect the Outpost rush ones on New World). One of the features that was added to the notebook is the Huawei Mobile App Engine. Basically, you could have run apps based on Huawei Mobile Services on the laptop and boy, the performance was way better compared to the built-in Android player on Windows 11 so if you’re planning to play games, it’s better to run it on Huawei Mobile App Engine. Of course, it will also come with Huawei App Gallery in where you can download apps and games that also run on your smartphone. It’s still on beta and there are some bugs and I’m expecting that it would be improved soon. The Huawei MateBook 14s is the notebook for people who are looking for a slim and sexy looking laptop with a decent power inside. And no, there’s no dedicated GPU inside this one but I do like it that they choose an H-series CPU for this one which will give more power for CPU intensive apps and games on the laptop. I also appreciate that they’ve now placed the webcam at the top of the display and its premium design.

So if you’re looking for a notebook that you can use for everyday usage for work then you might want to take a look at this. Although the competition in its price range is tough.