OnePlus 7 is one of the best affordable flagship smartphones around in the market today thanks to its affordable price and also powerful hardware inside. Actually, OnePlus 7 series comes in two variants – OnePlus 7 and the OnePlus 7 Pro but today, we’re gonna focus on the more affordable brother – the OnePlus 7. Don’t get fooled by its name. Despite the lack of the “Pro” branding on the OnePlus 7, this smartphone still got the looks and also the power inside but first, let’s focus on the design of the smartphone. Well, this one is a flagship and this one still comes with a solid glass build that I’m sure a lot of people will love. The curved back and its contours fit perfectly in my hand and I love holding the smartphone despite not using the case on this one and actually, the smartphone doesn’t really feel slippery despite having a glass build. The design of the smartphone is simple but it does feel and look like a beautiful premium flagship smartphone. At the back is where you can find the rear camera and yes, it’s protruding however, it’s not really annoying. Don’t worry because you would probably use the included case on OnePlus 7. 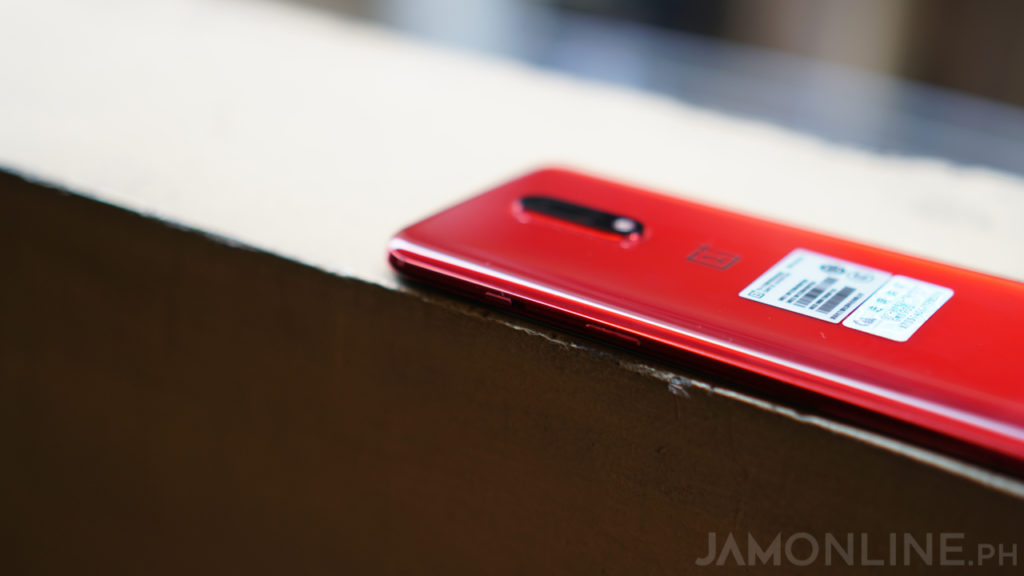 The smartphone does have some features that most Android smartphones don’t have and it’s the slider that can be found at the top of the power button. Basically, this one works similarly to the slider of the iPhone in where you can easily switch from ring to vibrate then to silent. A small feature but a really helpful one when it comes to Android. One of the highlights of the OnePlus 7 Pro is the usage of the 90Hz display but unfortunately, the OnePlus 7 won’t be getting that however, the AMOLED display of the OnePlus 7 is still pretty awesome. We got here a 6.28-inch display with a notch at the top and then there’s the Corning Gorilla Glass 5 protection. The display quality is pretty good and it’s pretty responsive and the bezels? They’re not so thick and there’s just a tiny chin below the smartphone. Thanks to the AMOLED panel, the colors are really vivid and nice and the blacks are really good on this one. The OnePlus 7 packs a 3700mAh battery and you might think that it’s a little bit lacking for some people, well, in our review of the smartphone, we got a score of 9 hours and 58 minutes on PC Mark which isn’t the lowest but not also the highest one that we got.

The real-life usage of the smartphone will be just fine. I’m using the smartphone from 10 AM and it will last me until 8 PM most of the time at average to heavy usage. There are only a few software that comes with the smartphone and I’m pretty good with all of them. But again, the speed of the UI of the smartphone is hard to match especially if you’re pitting it against heavily customized-UI of other smartphone brands. OnePlus 7 might not have the pro branding but this one got a Qualcomm Snapdragon 855 processor inside along with the 8GB RAM and also the 256GB internal storage which is more than enough for most mobile gamers.

If you’re playing casual games on the smartphone, I’m pretty sure that you won’t have a problem with the OnePlus 7. We also tried playing games on the smartphone like PUBG Mobile at HDR settings and EXTREME framerates along with NBA 2k20 at the highest settings and my oh my, the smartphone ran those games pretty well and without problems. Oh, and there’s the Fnatic mode which disables the notifications and also the second sim card so that you can focus on your gaming. The smartphone was also able to run Talion without problems and I have pretty good results on this one. Check em’ out below: There are two cameras at the back o the smartphone and it’s a 48MP Sony IMX 586 f/1.7 main camera along with a 5-megapixel depth sensor. If you’re the type of person who loves taking photos then I suggest that you get the OnePlus 7 Pro instead. OnePlus 7 is a really good flagship smartphone. Yes, it may have some features that you might miss like the full-screen display, the 90Hz refresh rate, and the triple-lens camera but don’t worry because you’ll still get a powerful Snapdragon 855 processor on this one which is pretty powerful. The camera? It might not have a telephoto or an ultra wide-angle lens but this one still performs well.

The OnePlus 7 is now available for only Php26,990 and it’s available at Digital Walker in the Philippines. I’m telling you, that the price is really great for the features and specs that you can get on this smartphone.