If you are into flagship smartphones, you’ve probably heard of the Samsung Galaxy S20 Ultra. It’s the best flagship smartphone from Samsung right now as the smartphone boasts top-notch features. First, we got here an Exynos 990 processor for the Philippine variant, a large 6.9-inch display and lastly, the smartphone is capable of shooting at 108MP and there’s the 100x space zoom. Did that catch your attention? If that’s a yes, then check out our review of the smartphone below. 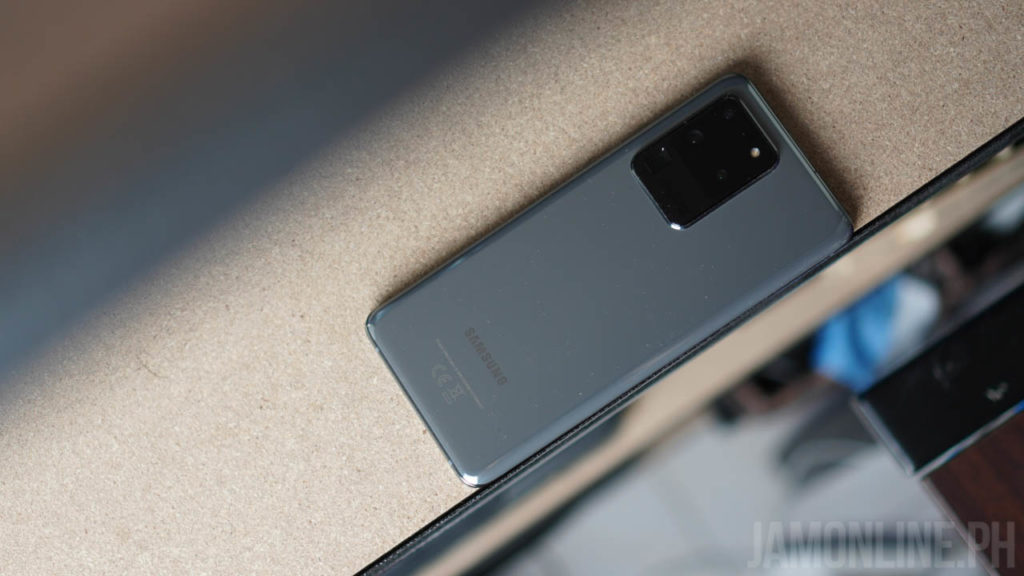 Again, it’s thick. For some people, they might find it hard to grip but don’t worry about the 6.9-inch display on this smartphone because, despite that, the Samsung Galaxy S20 Ultra has a taller aspect ratio at 20:9 which is why it’s still handy for some people as this one is taller and not wider. Despite the large size of the Samsung Galaxy S20 Ultra, the smartphone does have a reachable power button and the volume rocker on the right side of the smartphone. Just like its brothers, we still have here the in-display fingerprint scanner which works fine but if you want, you can go for the face unlock of the smartphone. The display of the smartphone is one of the biggest features and highlights of the series. It’s no ordinary 6.9-inch Dynamic AMOLED 2.0 QHD+ display that we’re getting here because this time, we’re getting here support for 120Hz refresh but unfortunately, it can only be enabled at Full HD+ resolution. If you’re worried about the display not being sharp at Full HD+, well, I’m happy to tell you that the quality that we’re getting on the display is still superb despite using 120Hz Full HD+ on the smartphone’s 6.9-inch display. As expected, the colors are saturated which is what you can expect from an AMOLED display. It’s saturated and the colors are popping and vivid. Again, it’s one of the best displays on a smartphone right now. There’s no curved display here unlike the previous generation but hey, at least we’re getting here a smoother and better refresh rate and the 2.5D glass on the S20 Ultra just looks fine for me. A large smartphone means that the device needs a large battery too and with the Samsung Galaxy S20 Ultra, we’re getting here a 5000mAh battery which is just fine for a smartphone with this size. In our review, we tested the smartphone at PCMark Battery test on both 60Hz and 120Hz and we got these scores:

The smartphone can give you longer battery life on 60Hz vs 120hz and there’s a really large difference between the two. In my usage, most of the time I only charge the smartphone on both refresh rates at the end of the day but sometimes, I’m still looking for my power bank in a single workday if I’m on my heavy usage on the 120Hz refresh rate.

Just like the other Samsung Galaxy S20 series smartphones, this one runs on the latest One UI 2.1 based on Android 10. With the 120Hz refresh rate, it’s on a whole new level as navigating on the smartphone is smoother than ever. As expected, you can still expect some software that are preinstalled on the smartphone including the Samsung applications like the Samsung Members app and the Galaxy Store but of course, my favorite one right now is the Samsung Global Goals in where it lets you earn money by enabling ads on your smartphone and yes, you can donate it to UNDP after that. 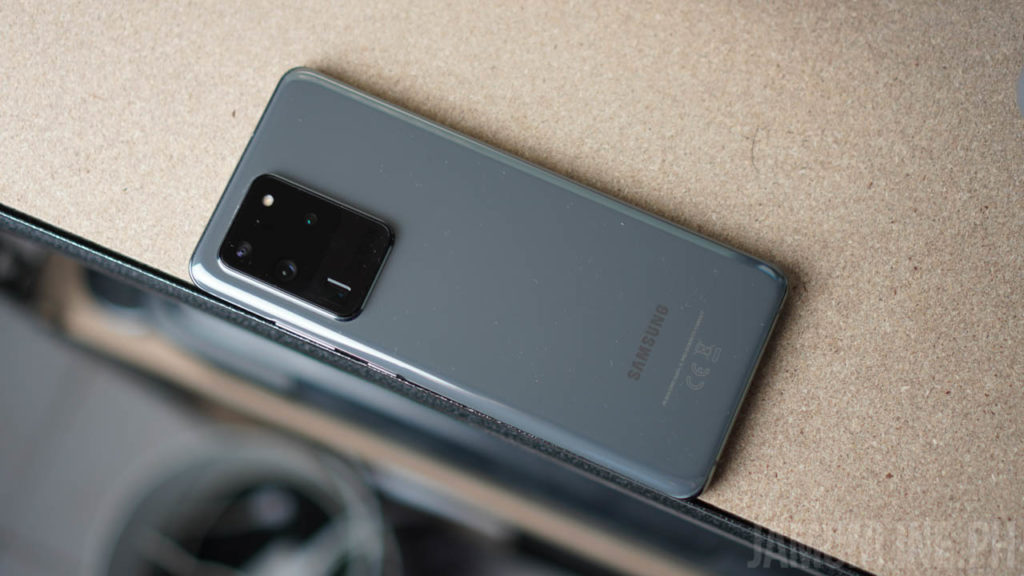 There are two kinds of Samsung Galaxy S20 Ultra that you can search on the internet right now. The first one is powered by Qualcomm Snapdragon 865 processor which is now available in the US but the one that we’re getting here in the Philippines is the one with Exynos 990 processor. Is it bad? Well, it depends on how you look at it. As Samsung has more control in the hardware of the Exynos chipset, it’s easier for them and more cost-effective to use this one. But are the benchmarks bad? No, not really. We’re still getting here some pretty high numbers but not as high as Qualcomm Snapdragon 865 chipset counterparts. Check out the benchmark scores that we got on the smartphone.

When it comes to gaming, we found the Exynos 990 powerful enough to run a lot of games at decent frame rates on different games including Black Desert Mobile however, the frame drops are quite noticeable in some of our tests. Check out the FPS and FPS stability that we got on different games: We noticed that the chipset is not as optimized as we think on PUBG Mobile as we can only get 47 median FPS but nonetheless, the Exynos 990 is a big upgrade from the Exynos 9820 of the Galaxy S10+ as we can get better and more optimized framerates including better thermal. Another reason why you should get the Samsung Galaxy S20 Ultra over the smaller brothers is that this one packs 5G. The only variant that comes with 5G in the Philippines is the Samsung Galaxy S20 Ultra however, 5G is not yet available on the smartphone and you have to wait for the software update for the 5G to be activated on the smartphone soon. Now here’s the controversial and most interesting part of the review of the smartphone. First, let’s discuss what we can get on the Samsung Galaxy S20 Ultra. There’s the 108MP main camera here that is capable of 100x space zoom which is a first on a smartphone. You might have heard from other reviewers that the Samsung Galaxy S20 Ultra might have some problems with regards to autofocus, well, we waited for some updates and the camera has greatly improved over few updates and the autofocusing issue on 8K video has greatly improved on the smartphone but initially, it was erratic at times as seen in my video of the unboxing of the shoes below

But now? It has greatly improved but we’re still stuck here at 24fps which is a bummer but hey, at least we got here an 8K that can give us better details when shooting videos. It’s great for shooting at 8K then on editing part, I can still crop the video and still have really good detail. But for most usage, 4K60fps will be just fine. The selfie camera of the smartphone can also do 4K60fps which gives really good details on both videos and photos. Now, let’s go to the rear camera of the smartphone. Again, there’s the 108MP camera on this one and the sensor? It’s a big upgrade from the predecessor which is why despite not using live focus mode on the smartphone, the depth of field or the bokeh is so good on this one especially when shooting objects at a close distance. Check out the shots that we took using the smartphone.

When it comes to zooming, the smartphone can go up to 100x and as expected, it wasn’t as detailed as I expected it to be but hey, at least the smartphone can do it and it is just one of the few smartphones that can do this. Check out the zoomed shot below

As you can see from the shots, the Samsung Galaxy S20 Ultra can do a pretty good job when it comes to details and the nano-binning feature of the Galaxy S20 Ultra is great as we can have sharper and brighter photos. The camera is still not perfect though but I believe it will get even better in the coming months as they update the smartphone just like the Galaxy S10+ and the Galaxy Note10+. The Samsung Galaxy S20 Ultra is a massive smartphone at 6.9-inch and it feels like the smartphone belongs in the Note family due to its size but of course, we’re getting here an overkill camera with 108MP main camera that is capable of 100x space zoom. Do we need that? Probably in daily usage, no, but it’s nice to see a camera on a smartphone like this. But the best feature that I like in here is the nona-binning feature of the camera since we’re getting here nice and sharper photos. Overall, we got here a premium build, a really powerful camera, and a really beautiful 6.9-inch QHD+ display that is capable of a smooth 120Hz refresh rate. However, you should take note that the smartphone is a little bit massive for some and also, the Exynos 990 processor inside it might be powerful but it isn’t as consistent as you can expect in some games. The Samsung Galaxy S20 Ultra is now available for Php69,990