Samsung has finally launched the latest generation of their flagship foldable smartphone – the Samsung Galaxy Z Fold4. This smartphone is currently the Korean brand’s best offering as this one packs powerful hardware inside and also some features that have been upgraded and polished as well. Outside, it’s pretty much the same. We have here a metal frame on the outside but this time it’s a glossy one and then there’s the glass back as well which is protected by Gorilla Glass Victus+. I never dropped the smartphone but you can really feel how tough and solid the smartphone is once you hold it. The Samsung Galaxy Z Fold4 is also the lightest and thinnest Galaxy Fold ever and the changes were noticeable. It’s light enough to be used in one hand but the smartphone is still chunky to be used when folded. Some people might still find it hard to use it in one hand. Nonetheless, the lighter and thinner body still helped. 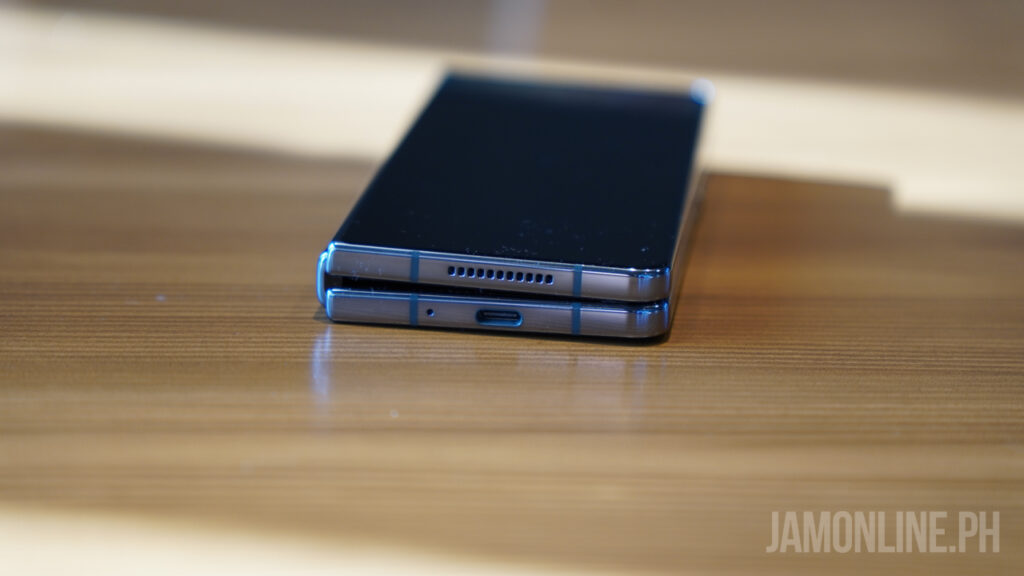 As for the battery, the smartphone comes with a 4500mAh battery with support for 25W charging. It’s definitely a letdown that we haven’t seen a faster-charging speeds from Samsung but as for the battery, it’s mostly decent as we were able to get a long workday of usage without the need for a battery despite using both the outer display and foldable display of the smartphone One of the changes that Samsung has done to the smartphone is the display. The smartphone also features thinner bezels on both the inner and also the foldable display and I tell you, both displays are excellent. The outer display features a 6.2” panel with a 120Hz refresh rate and already crisp 2316×904 resolution while the foldable display is a 7.6” display with QXGA+ resolution and 120Hz refresh rate. Both of them are Dynamic AMOLED 2x panels. For the colors, they’re really excellent and the refresh rate is really good for gaming whether you want to play on the outer display or on the foldable display. The aspect ratio has been changed as well which gives it a slightly wider aspect ratio which means it’s a little bit less tall for better ergonomics. As for the crease, it’s still here but they manage to have it a little less noticeable honestly, it just turns invisible for me once I use the smartphone. Samsung also promises that the displays of the smartphone are tougher and a lot better and I believe them as I really feel it on the smartphone. Another upgrade here is the better under-display camera on the smartphone. It is now less noticeable vs. the Galaxy Fold3 but the quality of the camera on the foldable display is still abysmal. 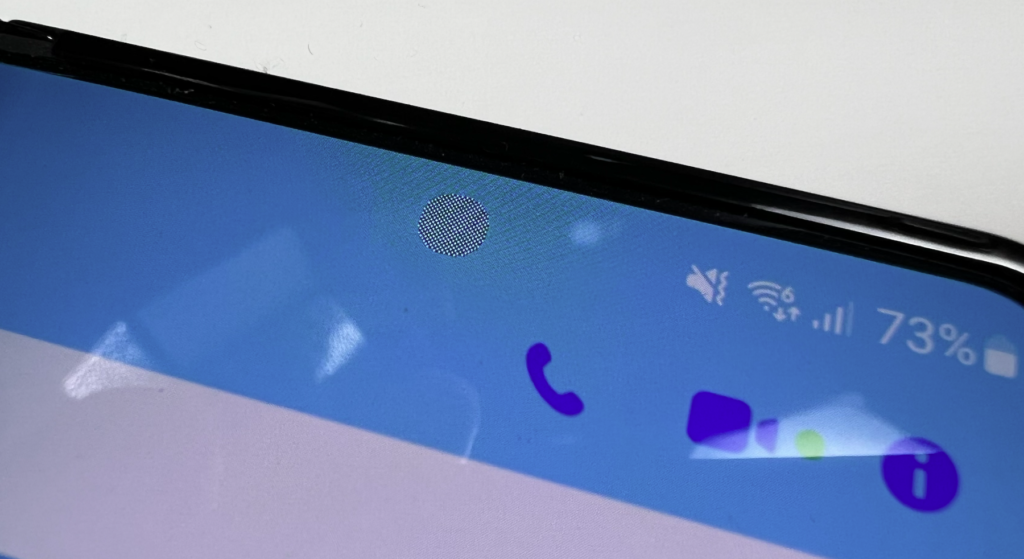 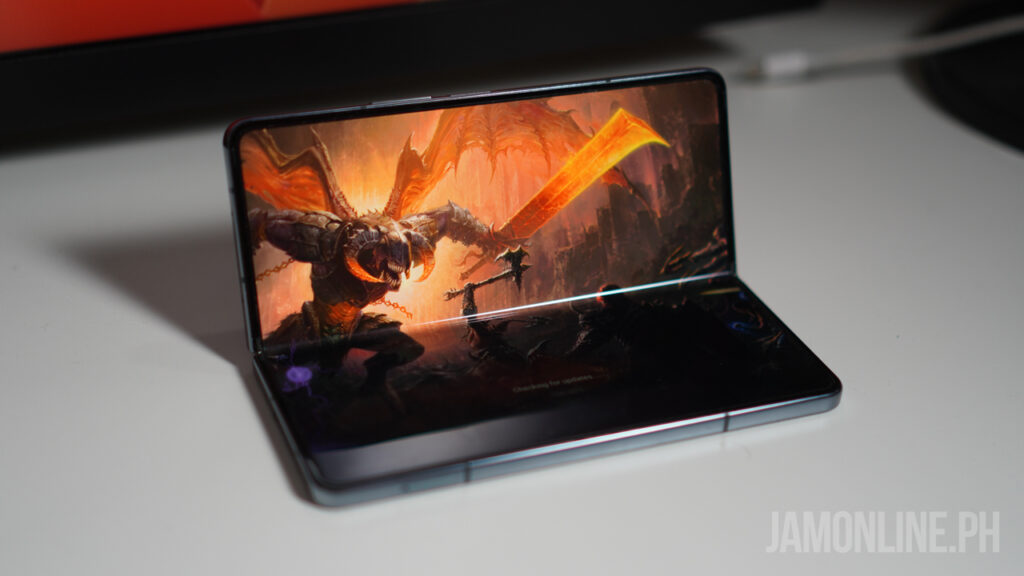 For the performance of the smartphone, the Samsung Galaxy Z Fold4 5G comes with the most powerful chipset on smartphones right now – the Qualcomm Snapdragon 8+ Gen1 processor inside along with 12GB of RAM. Basically, it gives everything that we need on gaming and also on benchmarks. In benchmarks, we got a pretty good score on the smartphone: But the best part about the smartphone is its operating system. Yes, it’s still running on OneUI but this time, it’s now running on Android 12L, the latest operating system of Android that is made for larger screens for better multi-tasking and better app optimizations. Some of those features include taskbar which lets me drag and drop apps on the foldable display of the smartphone. This feature gives me a more desktop feel experience on its 7.6-inch display. It’s way faster to open apps and of course to switch to different apps as well. This is especially perfect if you’re the type of person who is always working on the go. And of course, we got some minor improvements as well on flex mode as we can use the smartphone’s other half of the foldable display for navigating on different apps

Adjusting the app windows is cool as hell as well but it’s not on the level of Stage Manager of Apple or Samsung DeX. But hey, this is a 7.6-inch display on a foldable smartphone and I think Samsung did really well on this one. As for the accessories, I connected my Galaxy Watch 4 on the smartphone along with my Galaxy Buds2. As expected, the smartphone works better if you’re using the Samsung ecosystem.

The camera is one of the biggest upgrades on the smartphone. It now features a 50MP main camera along with 12MP ultra wide-angle camera and also a 10MP telephoto camera along with 10MP selfie camera on the cover display and also a 4MP under-display camera on the foldable display. Again, the under-display camera of the smartphone is still terrible:

As for the cover display camera of the smartphone, it has been great for taking selfies, and actually, I was getting really great selfie shots as most of the details are sharp and the colors and skin tone is on point on the smartphone.

I love how great the color is whether we’re in decent lighting conditions or at low light and I love how sharp the camera of the smartphone is. Again, it’s definitely not on the same level as the Galaxy S22 Ultra but it is still a great one. 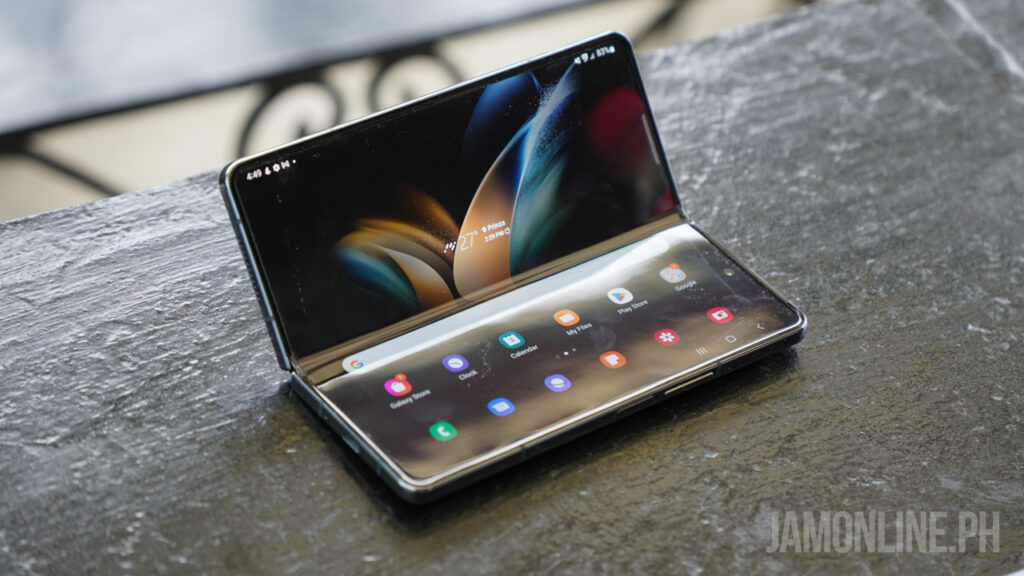 The smartphone’s camera and also its performance is also stellar but of course, there are better camera phones out there and it’s not the fastest Snapdragon 8+ Gen 1 out there but it’s definitely exciting and powerful as the foldable display of the smartphone gives you a lot more to do.