First of all, we’re not gonna compare the performance of the Macbook Pro and the ASUS Zenbook Duo as the Zenbook Duo has an upper hand with its 10th generation Intel Core processor while the Macbook Pro that we’re using is still running the old 7th generation processor. Not only that, even the current 13-inch Macbook Pros doesn’t have a discrete graphics card and the processors don’t run on the latest generation of Intel processors while the ASUS Zenbook Duo features an Nvidia MX250 GPU which is capable of running most casual games like Fortnite with better framerates. Aside from the processor is that the Macbook Pro boasts its Touch ID or the fingerprint scanner on the notebook while the ASUS Zenbook Duo comes with IR webcam that supports Windows Hello. Basically, you just need to look into the camera to unlock the notebook. I’ve been using the Macbook Pro 13” with Touchbar for a while now and I’m getting used to the touchbar of my notebook but here’s my main problem — it’s gimmicky. The non-touchbar of the Macbook Pro or the Macbook Air works just fine even without the touchbar. Why? Because it’s just a strip of display that caters small functionalities and sometimes, barely useful. Not only that, it has replaced the function keys which is why it gets annoying whenever I need to press f1-f12. But of course, there’s an upside of using the touchbar of the Macbook Pro. First, in video editing. Certain buttons appear on this one and it’s a shortcut of most of the features that I need on the Final Cut Pro. Navigating on photos and music too is easier as I can just scroll through the touchbar whenever I want to move it.

But here’s the thing, the ASUS Zenbook Duo’s Screenpad+ is a lot better. Why? Basically, the Zenbook Duo is a second screen for your notebook. This means that you can do anything with it and you’re not limited with the screen estate and features on the screenpad+ because again, the Screenpad+ is your secondary display. You’re not limited to the things that you can use from it as we got here a decent space that you can use to open other applications. The possibilities are endless with a second screen like this. For example in Minecraft, I’ve been playing Minecraft on my main display of the ASUS Zenbook Duo which is, by the way, has pretty good colors while the Screenpad+ has a fullscreen map of my game via my Google Chrome. But of course, it’s not just that. I can also open my Spotify playlist below while typing or blogging on the main display. I can also open three apps simultaneously on the Screenpad+ but it gets taxing on the notebook if these are heavy applications. 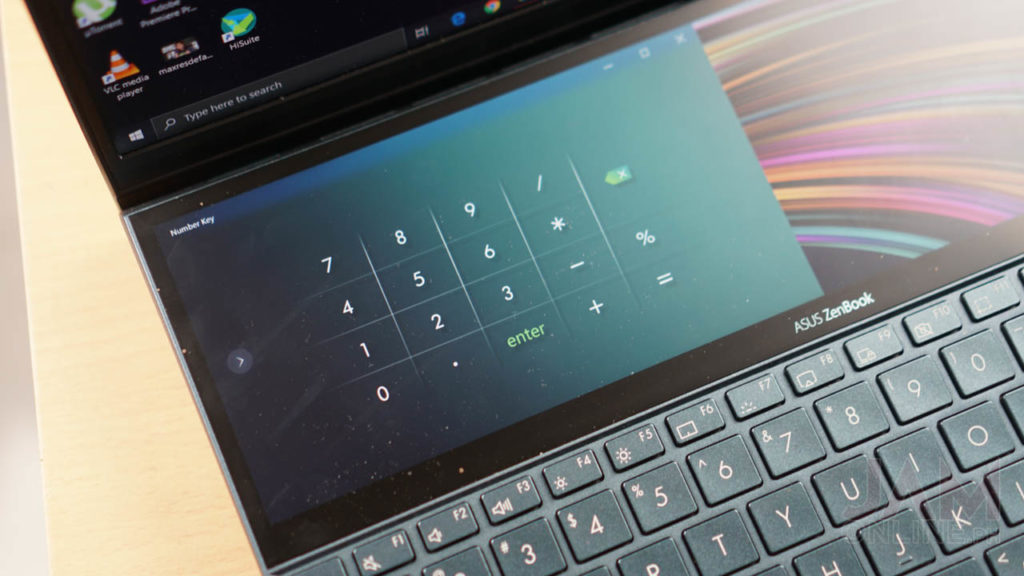 One of the things that I didn’t like in the Macbook Pro’s touchbar is it’s limited. Most apps and games that are available on the macOS don’t take full advantage of the touchbar and again, it’s not a secondary display in where I can place my windows and applications. Basically, the touchbar is just the home for most shortcuts for the Mac such as brightness and volume controls and also shortcuts for some functions on apps. Overall, I find the ASUS Zenbook Duo’s Screenpad+ useful while the Macbook Pro’s touchbar is still gimmicky even after years after its release. For productive users and if you don’t need the macOS, it will be more useful to use the ASUS Zenbook Duo because the Screenpad+ is more useful compared to the touchbar of the Macbook Pro. Not only that, you will definitely love the notebook too if you’re a gamer, you can opt for the Zenbook Pro Duo that packs a more powerful processor, a better Screenpad+, a bigger display, and a more powerful Nvidia RTX 2060 GPU inside. Get exclusive items worth up to Php18,000+ with ASUS/ROG Summer Kick-off Promo