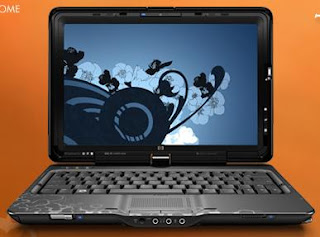 HP just reveal another Multitouch notebook that boasts a 12.1 inch with a price starting from $1,149.00 . Tx2z is equipped with a AMD Turion X2 with a ATI HD3200. HP touchsmart Tx2z is packed with tons of cool features like the 180 swivel display,MediaSmart 2.0, multitouch display and more…..Read more after the jump

• An integrated low-light VGA webcam with digital microphone for videoconferencing and VoIP3
• Watching, recording, and playing of live, streamed, or mobile Internet TV in hi-def using HP MediaSmart
• SRS premium sound for amazing, immersive audio
• An S/PDIF jack so two users can listen to movies and music via headphones (sold separately); you can also use this jack to connect to your home entertainment system and enjoy DVDs in 5.1 Surround Sound

Some of the multitouch features are this:

• A multitouch display with gestures (sets of finger movements that can be understood by the PC) optimized for HP MediaSmart
• The ability to touch your way through your PC to enjoy photos, music, movies, and more
• The ability to take notes on a tablet with the included digital pen—your notes are automatically converted into typed text
• Simplified password management via integrated fingerprint reader (optional)
• An optional stand for mounting the notebook upright, so it’s easier to touch (vs. when it’s flat)

Here is the specifications of HP touchsmart Tx2z:

Because of its price, I cannot choose whether Apple Macbook or a HP Touchsmart Tx27 🙂