Join Samsung’s TikTok challenge and get a chance to meet P-Pop boyband, SB19
Are you a certified A’TIN?

If yes, you don’t want to miss this awesome chance to meet your idol, SB19, or win cool prizes. 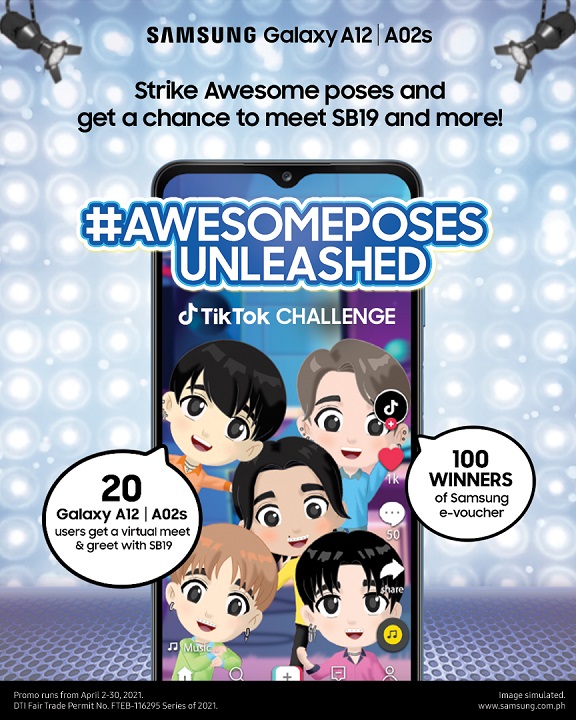 Through Samsung’s #AwesomePosesUnleashed TikTok Challenge, fans are encouraged to join the contest and share their #AwesomeGrooves on the platform, featuring the SB19 minis.

The TikTok challenge runs from April 2 to April 30, giving 20 Galaxy A12 and Galaxy A02s a chance to get a virtual meet and greet with SB19. They will also receive signed photocards.

In case you missed it, the Galaxy A12 and Galaxy A02s are the latest additions to the Galaxy A-series.

The Galaxy A12 sports a 48MP quad-rear camera setup and an 8MP selfie snapper.

Meanwhile, the Galaxy A02s is loaded with triple rear shooters and a 5MP front camera.

Both devices have a 6.5-inch Infinity-V screen, HD+ display, and a whopping 5,000mAh battery with a 15W fast charging technology.

Here’s the local pricing of the Galaxy A12 and Galaxy A02s:

So, what are you waiting for? Shoot your entry using the Galaxy A12 or Galaxy A02s and get the chance to meet SB19!