Metal Slug is one of the famous arcade game in the world. And now, Metal slug comes into Online. And it will be called Metal Slug Zero online. This game is expected to release on 2009 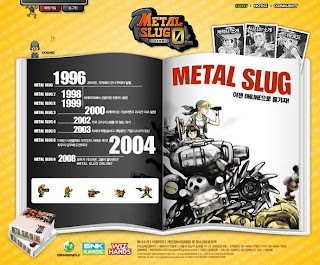 -‘MetalSlug online’ development as an online game by reinforcing community and by augmenting dexterity, taste, and verisimilitude of playing hand while maintaining concept of the existing game.

– Through promotion of congratulating the site opening, lots of free gifts such as Nintendo Wii and MetalSlug complete pack are provided.

– Plan to have public demonstration service during the second half of this year.

Dragonfly (CEO Park, Cheol-Woo) has opened teaser site (www.MetalSlug.co.kr) where ‘MetalSlug online’, which is serviced by this company and is developed by WizHand (CEO Im, Ik-Soo), is introduced for users and carry out diverse promotion until July 24 to congratulate this grand opening

‘MetalSlug online (A temporary name)’ is under development by reinforcing online community and by augmenting dexterity, taste and verisimilitude of playing hands while maintaining the existing game concept as comic shooting action. In ‘MetalSlug online’ with application of full 3D graphic, maximum up to 4 persons can play in the existing series with the background of near future after 3~5 years and in addition to characters of 8 persons appearing in the existing series, new characters will be introduced additionally. We plan to provide user with extraordinary excitement by adopting a card system in which users can collect all items (character, slug, and weapon) within the game as cards.

Some of the features are: 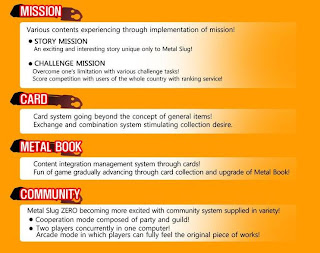 Rawr!, I hope a company here in the philippines will be hosting this game. I just love this game. And I want to download metal slug online right now and play it!.