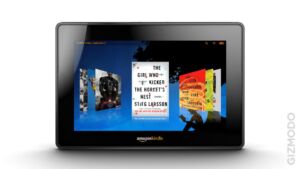 So another tablet will be on the market soon but this time, it is from Amazon. They’re the one who introduced to us the Kindle E-reader. Now, they have created another tablet base on Google’s Android.

According to Gizmodo, here’s the information about the Amazon Kindle Tablet:

Hardware• Full color 7-inch touchscreen.
• Unlike the iPad, it will probably only support two finger multi-touch, not ten fingers.
• It apparently has one single-core processor.
• Maybe only 6GB of storage—possibly more cloud oriented
• No physical buttons on the front
• No camera
• Rubberized back, like the BlackBerry PlayBook.
Software• It’s built on a forked version of Android (apparently older than 2.2), but there are no visible Google apps of any kind—you’ll be able to get Android apps through Amazon’sappstore• It has Apple Cover Flow-ish user interface, with all the content—books, movies and music—showing in a carousel. The UI is “very responsive,” unlike the Nook Color.
• In portrait mode, it has a dock where users can add their favorites. It hides in landscape mode.
• The book reader app is much like the iOS and Android Kindle app.
• The music app connects to Amazon Cloud.
• Logically, the Amazon Kindle will provide a storefront for the whole of Amazon (I imagine this looks a lot like the Amazon Window Shopping application on the iPad).