The title says it all. The picture above shows you the N95 with Windows 3.1 (Which is very old). And sadly, Windows on Nokia can be only run on some phones. 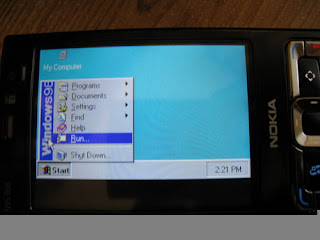 Too bad, Windows in Nokia is only available on some high end phones which has a high amount of RAM. BTW, Windows in nokia is just an emulator like Bootcamp in mac. I don’t know yet if .exe files are working in this thing.

But I do hope in the future that not only windows 3.1, 95 & 98 can be run on Nokia Phones. But also windows XP, Vista and even the upcoming OS of Microsoft which is Windows 7. Hmmm, How about mac OS X, anyone want to mod about this one?.