Those are the perfect words to describe the Infinix Note 8. 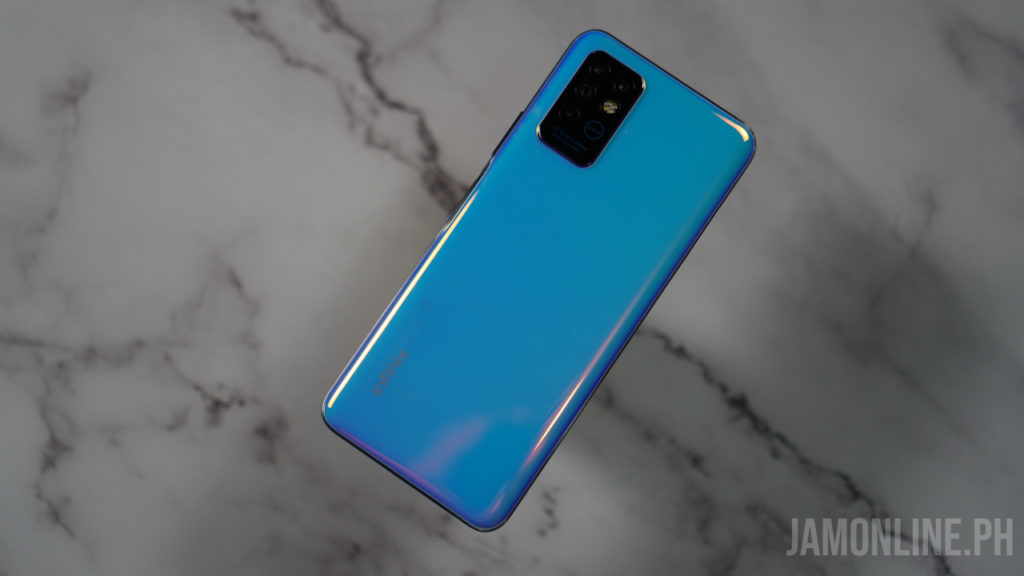 But with a lot of smartphones that can also bring those three exact things to the table, is this device STILL worth considering? 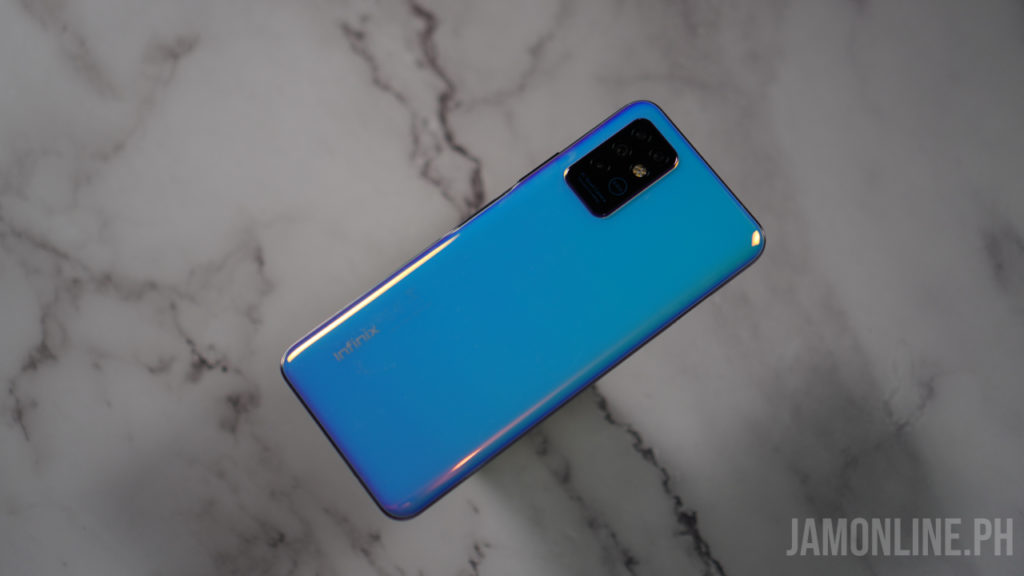 If there’s one thing that has been consistent with every Infinix smartphone that we have played around with, it is their enormous size. This time, the Note 8 is not only big, but it is also tall and heavy. Meaning, one-hand usage isn’t advisable even if you have a big hand. Not only that, this device comes with a slippery body as well, demanding a solid grip from users. Infinix dressed it in a stylish, polycarbonate body. Trendy enough, consumers can get it in different color variants: Iceland Fantasy, Silver Diamond, and Deepsea Luster. Ours flashes the beautiful Iceland Fantasy colorway, which reminded us of the Huawei P-series devices. We wouldn’t be surprised if Infinix took inspiration from them, as its gradient design really looks almost similar…if not exactly the same.

The Note 8 sports a glossy body, too, which means that users must protect it with a clear case to avoid leaving too many fingerprints on its back. 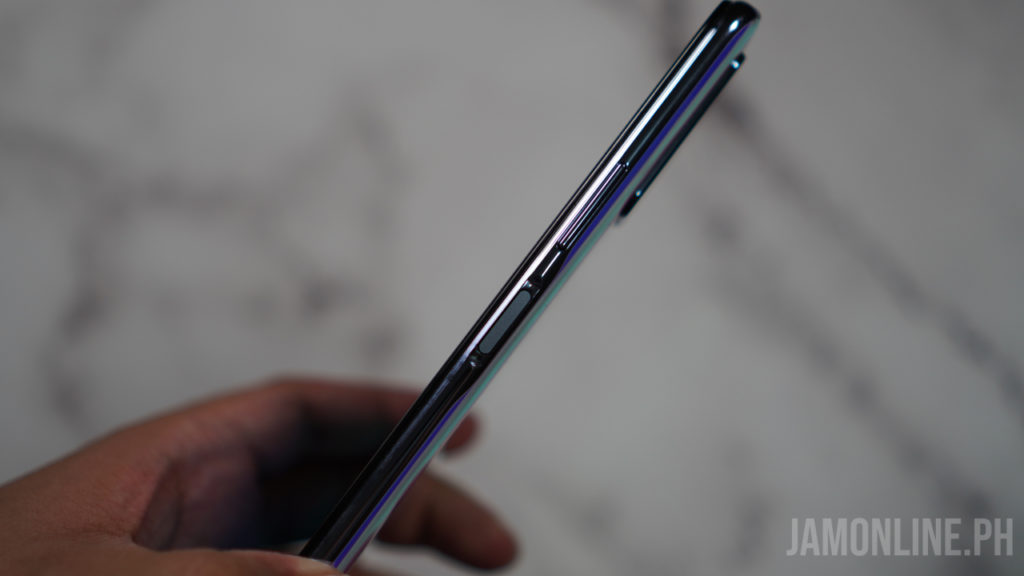 Its left cheek accommodates its volume keys and fingerprint scanner, which doubles as the lock button. On the other side, its triple card tray with slots for two nano-SIM cards and a microSD card is located. Meanwhile, the bottom part of the phone houses its microphone, USB Type-C port, and speaker grilles. 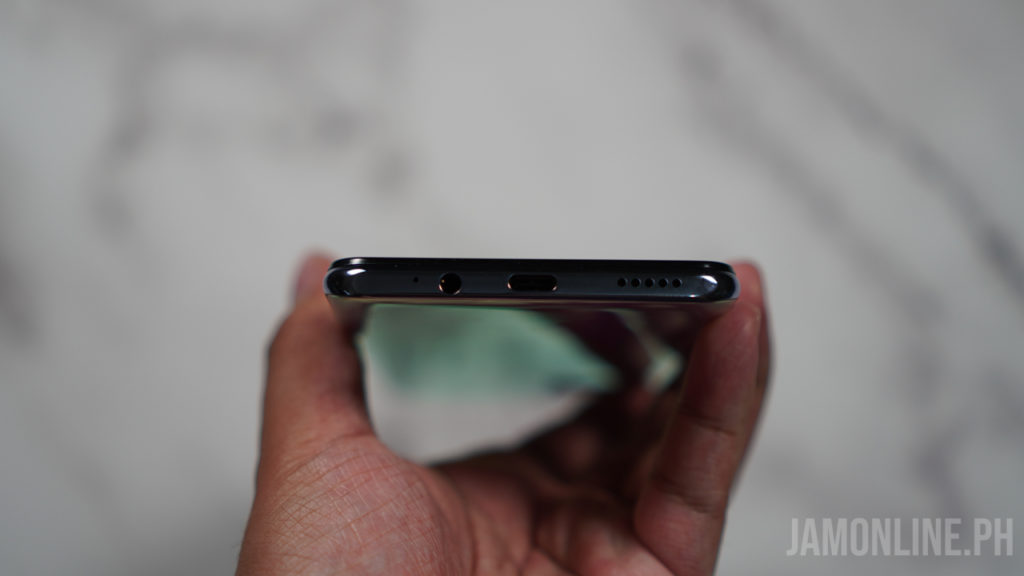 With its tall physique, it also took us a few days to get familiar with its keys’ placement most especially its volume buttons, which are placed a little higher than its ideal location.
Flip the handset on its back to reveal its quad-rear camera setup, placed in a rectangular camera hump. Its back portion comes with a discreet Infinix branding, too.

Overall, the Infinix Note 8 boasts a premium-like design that can steal the spotlight from more expensive devices. Those who prefer a flashy device will surely love this phone! 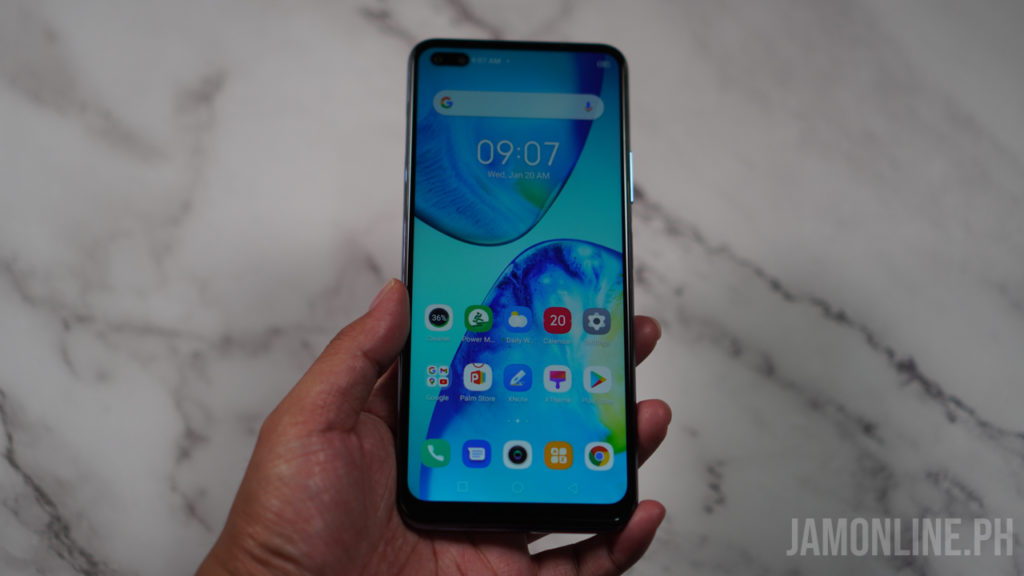 Moving on to its display, the Note 8 is equipped with a large 6.95-inch IPS screen with an Infinity-O display to house its selfie snappers. And yes, its hole-punch design screams “Samsung Galaxy.” One might mistake it for a Galaxy device at first glance, seeing only its screen.

With its large display, we enjoyed streaming films and playing games using the phone. It has great viewing angles, sharp images, and accurate colors. We just felt underwhelmed by its 720p resolution, but it’s tolerable though. It’s just regretful that Infinix didn’t go all out with its display, considering that it has an enormous screen. Meanwhile, its brightness is also a so-so when we used the device outdoors.

One of the vital offerings of the Infinix Note 8 is its juice. Infinix geared it with a 5,200mAh battery that supports 18W charging. With this, we expected that the device can accompany us throughout our mobile tasks as we tapped it as our daily driver. We ran it on the PCMark Battery Life test, and it got 15 hours and 17 minutes. Our team also did a video loop test, wherein we left its WiFi connection opened, while its brightness level and volume level were set at 50%. It lasted for 11 hours and 48 minutes.

After the test, the device’s temperature was too high. It’s manageable and expected though, as we used a video that comes with heavy graphics.

Meanwhile, the handset can accompany us for almost 11 hours too when used for our daily mobile tasks. Our mobile activities for a day include basic communications, social media browsing, and casual gaming. It lasted for just 9 hours and 22 minutes when we heavily used it. The device runs on Android 10 OS with XOS 7.1 skin on top of it. It features multiple home screens, where users can organize their apps by creating folders. The phone also comes with an app drawer, which is arranged alphabetically.

We also noticed how it has unique icon styles, making it hard for us to find the app we’re looking for. Continuous usage allowed us to become familiar with its apps’ icons though. Infinix loaded the Note 8 with 128GB of internal storage, but with its pre-installed apps, we’re only left with just 112GB. This is still enough for us to download our go-to apps, including social media sites and other gaming applications. Meanwhile, users can expand their storage up to 2TB via a microSD card.

The phone also sports a MediaTek Helio G80 chipset, paired with 6GB of RAM. With these, we set the bar high for the Infinix Note 8. But to manage our expectations, we ran it on compatible benchmark applications: The Note 8 didn’t fail us when we played around with it. Although we’ve seen several devices that can offer a smoother and faster experience at its price point, its performance is still commendable as it didn’t lag when we switched from one app to another. We also left several apps running in the background, but it didn’t slow down.

The only time where we experienced a lag was when we played games with heavy graphics. With this, we used the perfect settings that won’t affect its performance and speed.

Its security features, such as facial recognition and fingerprint scanner, are responsive too. 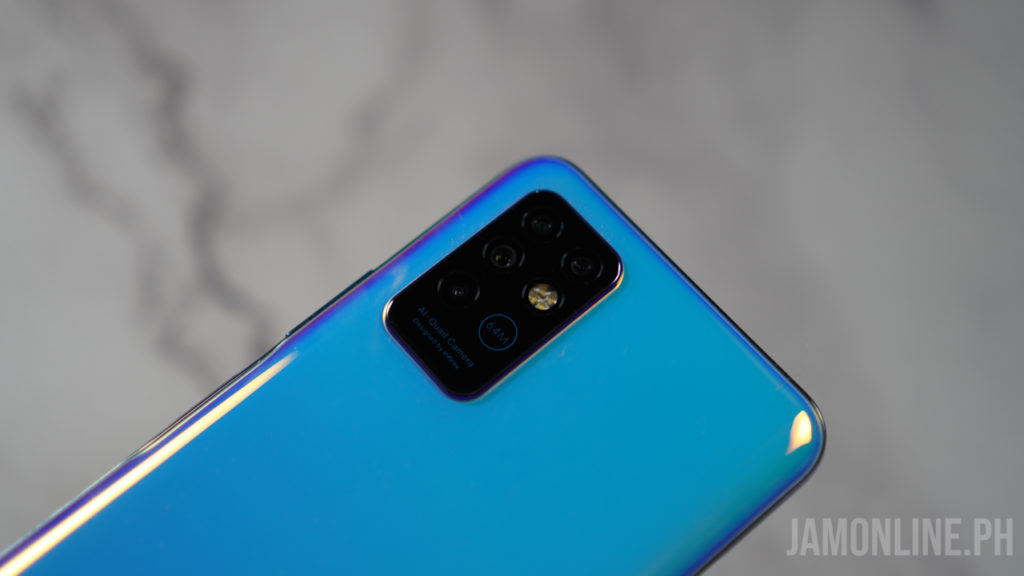 When someone sees its camera features on the specs sheet, one would think that it’s really promising. For instance, it bags a 64MP main shooter, 2MP macro lens, 2MP depth sensor, and a 2MP AI camera. For selfies, it is mounted with a 16MP snapper and a 2MP depth sensor.

The Infinix Note 8 has the best and most consistent performance within the Infinix smartphones that we’re able to test. It can capture clean images with accurate and sharp colors, though of course, they weren’t as good as those photos captured by camera-centric devices at its price segment.

However, we have to be honest that we found its 64MP main camera underwhelming. Its HDR isn’t that strong, too. 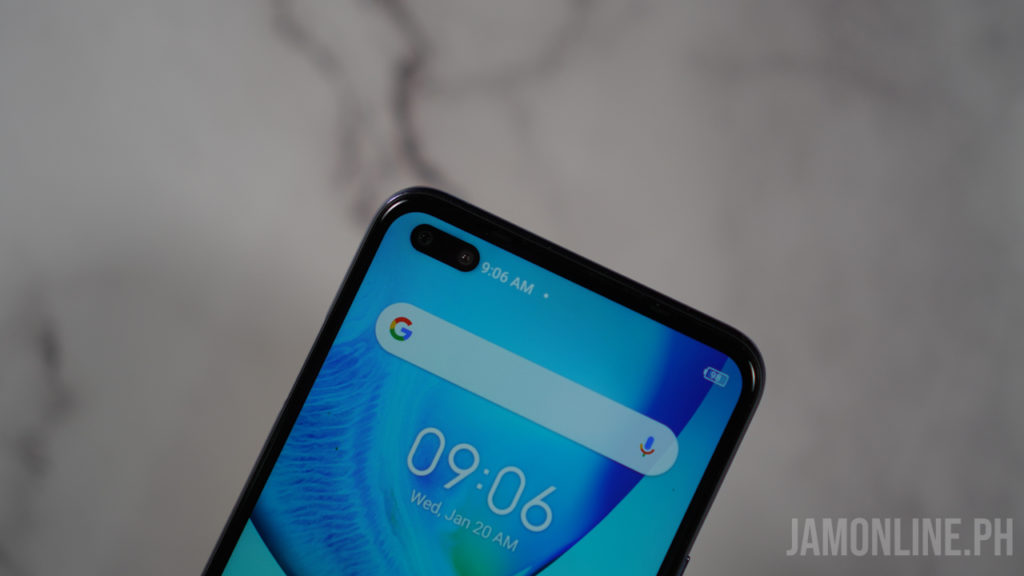 Meanwhile, its selfie cameras do well in both indoor and outdoor settings, as well as in well-lit and dark rooms. 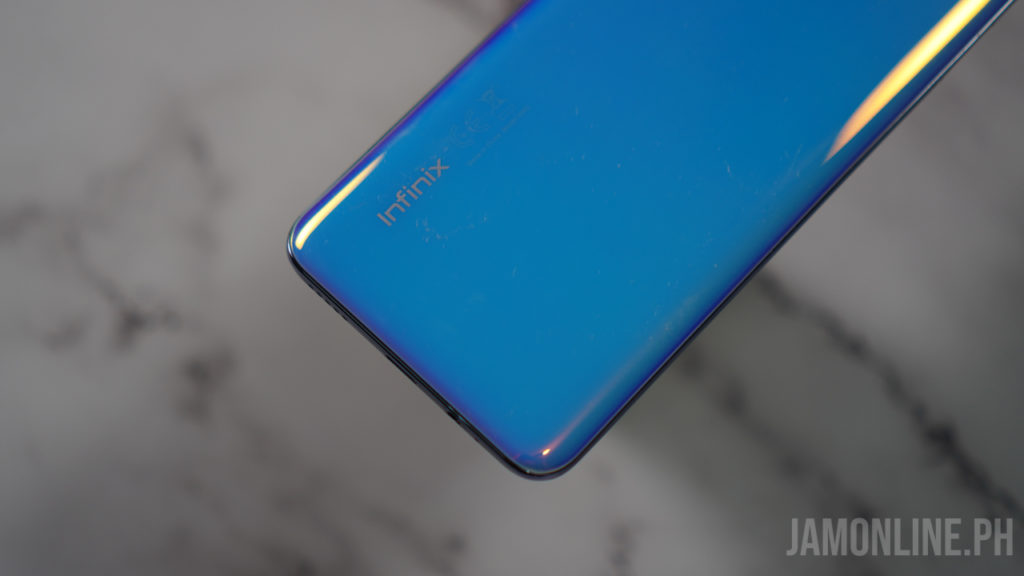 With a large display, long battery life, and decent performance, the Infinix Note 8 can be a great device for people who are looking for a phone, designed for multimedia. Infinix could have made it a lot better, but with its price tag, we felt like it’s already worth it.

Nevertheless, if you’re someone who is looking for a good camera phone, then this device might not meet your expectations. It’s still good though if you’re not too perfectionist and will just use it for social media. After all, a few edits from a photography app will surely work!

The Infinix Note 8 has an original SRP of Php8,490 in the Philippines.

So, are you getting one? Let us know what you think in the comment section below!