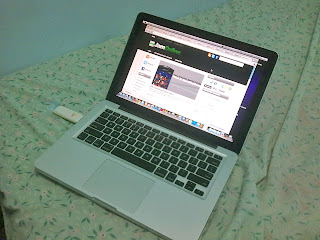 It’s been a month since I switched. Well, there are a lot of pros and cons of being a mac user. But despite these cons (including that Macbook Pro refresh!, dammit apple, why did you update your macbook pro?, oh Gawd, Its depressing!) I still prefer to stay on Jobs’ than Ballmer’s. Why? Here are my reasons, why I still prefer Mac over Windows

No shutdown, sleep only. I didn’t shut down my mac for the first two weeks, yes, you just read it right. Not 2 hours but two weeks. How?, well I just close the lid of my laptop. I just let my Macbook Pro sleep when I’m not using it. IMO, Mac has the best power management in the whole wide world. I always plugged in to the nearest A/C whenever there’s available around hehe. I turned off my Mac after two weeks because I need to calibrate the battery. FYI, calibrating the battery can improve its battery life cycle
Hey Mac, I need that app!. One of the downsides of having a Mac is the lack of Windows Applications counterparts. And I don’t recommend this to hardcore gamers because most of the cool games on Windows are not available on Mac. Fortunately, there is an application in  Mac OS X called Bootcamp. It allows you to run Windows natively on a Mac. But expect some bugs and errors on that. You rarely encounter those things on Bootcamp btw.
iPhone look!, I got an App store too!. When I bought my Mac, the first thing I did is to update it. Thanks to OS X 10.6.6, the Mac App store arrived on Snow Leopard. There are a lot of paid apps on the app store when it was launched and the applications and games are limited. But soon enough the Mac App store will grow and will produce more cool apps.
Those are just some experiences that I like on my Mac. I’m still waiting for OS X Lion, since it will feature some iPad features that I like and they’ll add more gestures to it.