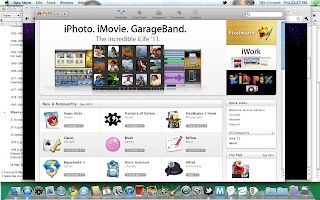 Mac Appstore has been expected to be release on 1:00am Philippine time but it seems that it was released too early and many people are already experiencing errors maybe because of too many people around the world wants to download the update, OS X 10.6.6 to be exact.

One of my favorite app is the twitter app for mac, pictured above which is free. Some cool games like Flight Control, Harry Potter years 1-4 & Angry birds are also available. Angry birds cost $4.99 while the Harry Potter cost $50, a little bit pricey huh?.
All in all, the Mac appstore is cool just like its brother, the iTunes store. You can buy apps using the apple ID that you also use in the iTunes store. Haven’t tried buying a paid app since I don’t have a credit card. So if you are already familiar iTunes store, you can get use to Mac Appstore easily. To get this on your Snow Leopard Mac, just update your software to 10.6.6 and you’re good to go