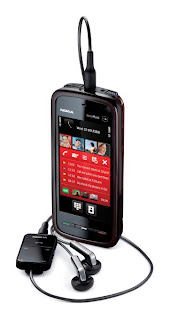 Remember Nokia 5800? The cellphone which was also dubbed as Nokia tube and was also called Xpressmedia instead of Xpressmusic. Nokia had just announced this new phone, anyway I will give you the specifications again.

As you can see in the picture 5800 is a touchscreen phone, It is the first S60 touchscreen phone. For me, This thing is an iPhone killer! RAWR!. I just bought a phone last april ( which is 5610 xpressmusic) and this one is very tempting *evil laughs*. I really want this phone :P.