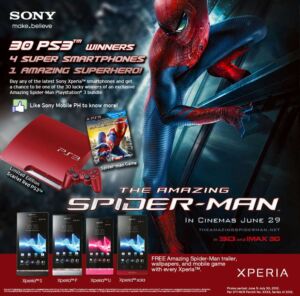 Do you like both Sony and Spidey?  Here’s a promo that you’ll surely love. Well actually they’re running two promos at the same time. The first promo is the ”Amazing Smartphones, Amazing Spider-Man”. So this promo entitles the fans of the official Facebook page of Sony Xperia™ Philippines (which can be found here: http://www.facebook.com/sonymobileph) to win one of thirty limited editions Playstation 3. Yes guys!, a limited edition scarlet red PS3 and a Sony PS3 Spider man game will be raffled. So how the hell can we join this promo? Check it out after the break!

Since you like Sony, just buy any of the four new Sony XperiaTM Smartphones – Xperia S, Xperia U, Xperia P and Xperia sola from authorized dealers nationwide and send an official entry using the “Amazing Smartphones, Amazing Spider-Man” application on the Sony Mobile PH Facebook page to join. Oh and participants must be 15 years old or higher and he/she must be a resident of the Philippines. This promo started last June 5 and will last until July 30, 2012. 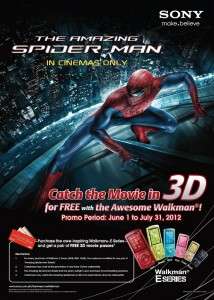 So here’s the second promo. Planning on buying a walkman today? Well, today’s your lucky day! why? because Sony Philippines is giving its Sony Walkman E series customers a treat to the reboot of the Spiderman movie. For every purchase of the Sony Walkman E Series (4GB, 8GB, 16 GB) in any Sony Centre nationwide, the customer automatically gets two (2) tickets to the Amazing Spider-man at any SM and Ayala cinemas.
So that’s it! So if you’re planning to buy a Sony Xperia or a Walkman E series be sure to join this promos!
Subscribe to JAM Online to get the latest news about tech and other stuffs