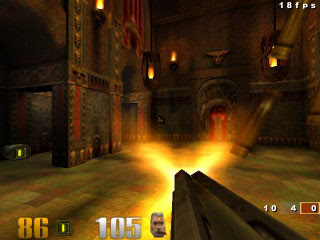 picture from symbian freak. Picture is taken from a Nokia N95 8 GB cellphone

Quake III is a multiplayer FPS game which was released during 1999. During that time I was only 5 years old. And AFAIK my brother use to play this game.

Quake III arena is only compatible to phones with Texas ‘s OMAP 2420. which is on Nokia N95 8GB, Nokia N82 And on Nokia E90 however Nokia N95 cannot run this game due to lack of RAM.

You can also run a local server on the phone using Bluetooth. And you can also use a keyboard using the bluetooth.