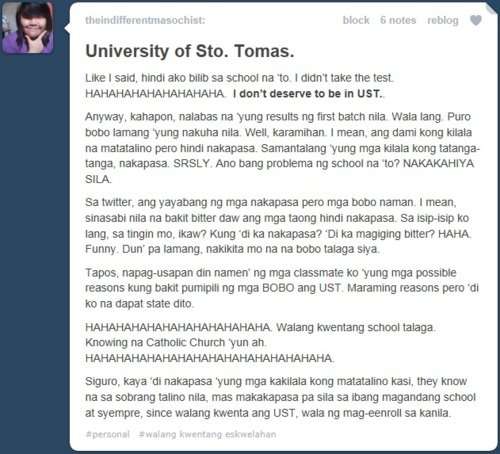 Last night, theindifferentmasochist name became known especially among UST students. Why?, because she posted about how stupid UST is. And I completely disagree with all the things that she said. She told in her blog post that the people who passed UST are stupid. Well,  because of that bashing. She received a lot of hate messages from different students from different universities. Even though we have a freedom of speech, We shouldn’t abuse it like what theindifferentmasochist did. We can’t confirm if she’s really the one who posted that or someone just hack or used her pictures. As of this posting, her tumblr account is deleted. And according to some comments in Facebook, all of her Social networking accounts are deleted. We don’t know if it is because of guilt or someone just used her account. I guess this will be a lesson to all.