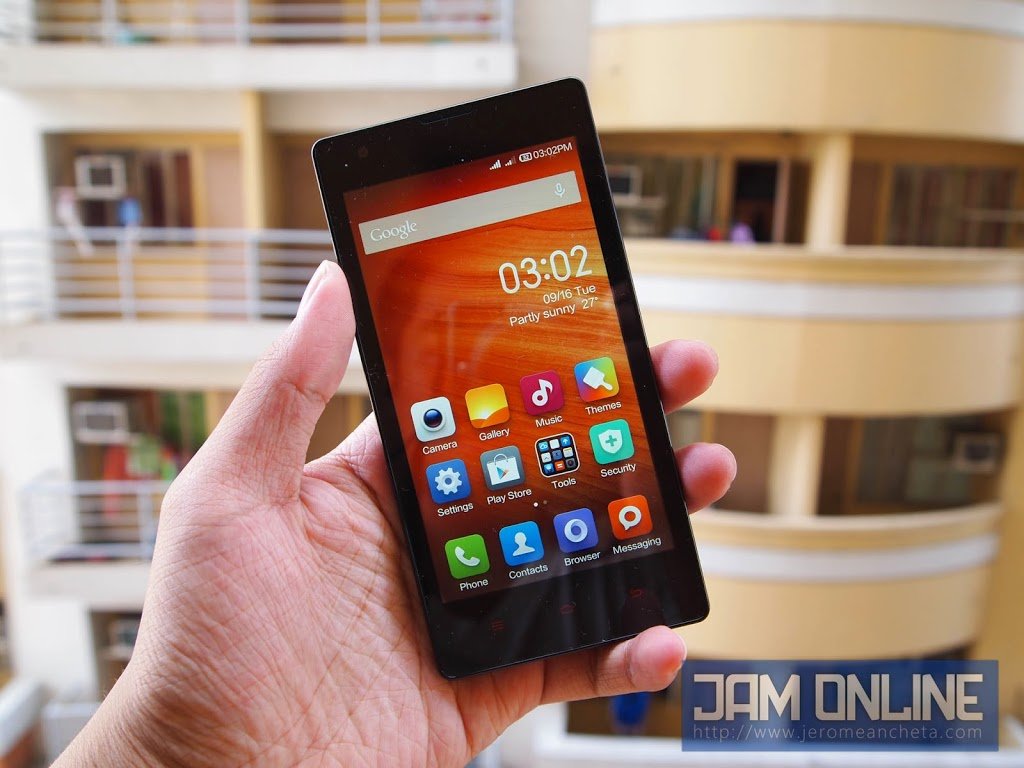 When Xiaomi told us in their Facebook page that they’ll be arriving here in the Philippines. I was just like “Oh, here’s another Chinese brand that’ll arrive in the country”. But I was wrong. Xiaomi is not just another Chinese brand. They’re more than that. Xiaomi is a brand that just changed the mobile industry. How? By offering smartphones that are really affordable for its specifications. Yep, Xiaomi Mi 3 is a flagship phone but it has an SRP of P10,600. It’s freaking affordable, right? And now, we’ll review their latest mid-range smartphone to arrive here in the Philippines, the Xiaomi Redmi 1s.
Design and Construction
The design of Xiaomi Redmi 1s is generic. It’s simple but it’s very easy to grasp especially if you’ve used an Android smartphone before. The Xiaomi Redmi 1s is purely made up of plastic but it is quite solid compared to other smartphones at its price range. However, I notice Xiaomi Redmi 1S is little thick and heavy for its size but despite that, the ergonomics of the Xiaomi Redmi 1S is quite good. The size of the phone feels just right. The back of the smartphone has a very neat look. There’s the camera at the top and the Mi logo at the bottom. The back is made up of plastic but it doesn’t feel cheap when you’re holding it. Inside it is a Dual Sim card slot which supports Mini sims and there’s the 2050mAh removable battery.
If you’ve noticed, the capacitive buttons of the Xiaomi Redmi 1S is red. Yep, the buttons are much harder to see especially at low light conditions since it doesn’t have a backlight. Oh and before I forgot, there’s a small LED notification just below the home button.
The Xiaomi Redmi 1S might only have an 8GB internal storage but don’t worry, you could use your MicroSD for your heavy files. Another thing to like in this device is it supports OTG. The audio quality of this device is just okay and it isn’t really that great.
Display Xiaomi Redmi 1S is running on Android 4.3 and it is already on MIUI 6. I noticed a lot of bugs but I’m not really worried since they MIUI has a weekly update to fix bugs.  Despite having a slower Qualcomm Snapdragon 400 Quad-Core Processor, the experience was very similar to the Xiaomi Mi 3. What do I mean with that? Well, the speed, transitions & responsiveness of Xiaomi Redmi 1S is similar to Xiaomi Mi 3. Yep, this phone is pretty responsive and fast.
The Qualcomm Snapdragon 400 is a processor for mid-range devices and it performs pretty well. There’s a 1GB of RAM but despite having that, the Xiaomi Redmi 1S was able to get a score of 20723 at Antutu. Actually, that’s a pretty high score for its specifications.
In gaming, I was a little bit disappointed when I played Grand Theft Auto: San Andreas. It is a very demanding game on Android and I experience lags and slowdowns at lowest settings & 100% resolution. However, the game became smooth when set I set it at 0% resolution. Another game that I’ve tried in this smartphone is NBA 2k14 and it was flawless. I believe that a software update could fix the problem in GTA:SA.