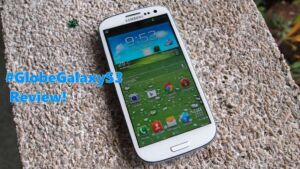 One of the most awaited phone this year and probably the best android phone available in the market, the Samsung Galaxy S3. It is the latest flagship phone from Samsung that sports an eye popping specifications and performance. This phone was officially launched last May but Globe had their own launching last June 1 at Mind Museum in Taguig in which I won the phone thru the raffle. (Oh yeah, you can check out my post about the launch here) Hurray! Check out the review after the break. 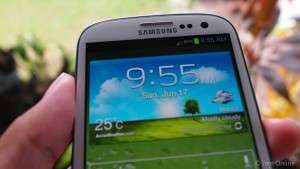 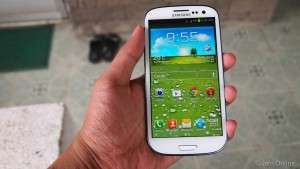 Here is the specifications of the Samsung Galaxy S3. And yes, It has a pretty amazing hardware.

What’s inside the Box? 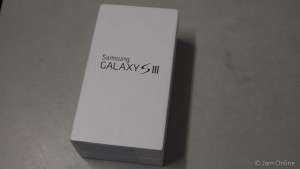 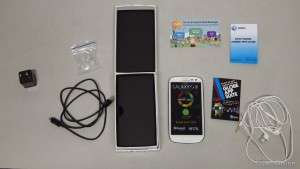 Yeah, the phone is pretty big but it just fit right in my hand. I must say that Samsung did a job well done in terms on its body. The looks isn’t as pretty as the Samsung Galaxy S2 and HTC One X but they really made a good job on designing the phone for easy grip on not-so-big hands. 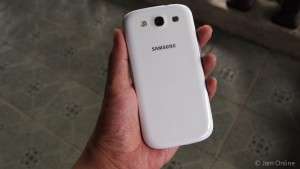 At the top of the phone is the 3.5mm audio jack and a microphone. At the left side, you can find the Lock/Unlock/Power button and if you’re looking for a camera button, sorry Samsung didn’t add that one on the Samsung Galaxy S3. On the opposite side is the volume rocker. Nothing special about these things. The sides of the phone is not made out of brushed metal but just plastic but the phone doesn’t feel cheap and it still feels very solid on my hand. 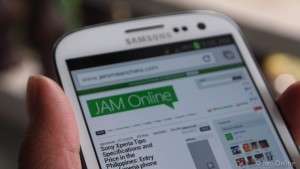 One thing I don’t like about the Samsung Galaxy S3 is the back design and its cover. The design is too simple and it isn’t that attractive because it is made up of pure thin plastic which is very prone to breakage. My Galaxy S3’s back cover already have a crack at the back cover but it’s not that big and visible. I got that crack after the phone slipped on my hand an dropped. I estimated that I dropped the phone at 2 feet high. The Camera, LED Flash and the speaker are aligned to each others with the Samsung logo at the back. 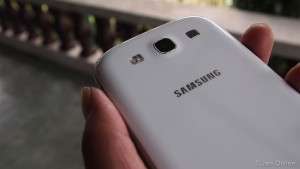 Thank God, the battery can be removed unlike the other phones like the HTC One X and the Lumia 900. You can change your MicroSD card without removing the 2100mAh battery. Yeah, the MicroSD is hot swappable but unfortunately, the Micro Sim suffers a different fate. Yes guys!, you’ll have to cut your sim if you’re still using a regular sim. And no, you can’t change your Micro Sim when the battery is still intact but I doubt that will be a deal breaker for you guys. The speaker can also be found at the back which is quite decent. It isn’t that great nor bad, just a normal speaker that is doing his job well. Nothing special about the speaker. Oh and the battery life?, The phone can last up to a day on regular use but when you’re a heavy user (Mobile Data is always on) like me, I suggest that you get a power bank and use power saving (A pretty cool feature on the S3) most of the time because the phone will just last up to 8-12 hours only.


The only usable internal storage on the phone is 11.35 gb and when you feel that you need some more, there’s a MicroSD card slot up to 64gb at the back. I put my music and videos to the MicroSD while the apps and games are on the internal storage. 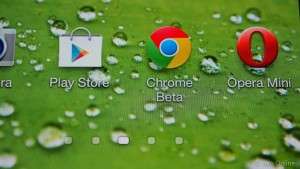 The 4.8″ Super AMOLED HD Screen is one of the best features of the Samsung Galaxy S3. It’s very big and it produce great colors. The sunlight legibility of the phone is good but I think the Nokia Lumia 800 does better on the sunlight legibility. But hey, the Super AMOLED HD still beats the Nokia Lumia 800’s Clearblack AMOLED Display when it comes to colors. The display is very crisp and I really like how little the pixels are. 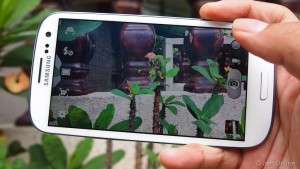 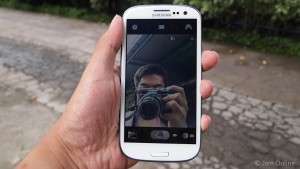 Samsung Galaxy S3 is equipped with a 8 megapixel rear camera while there’s a 1.9 Megapixel front camera. The 8 megapixel is quite nice but I was quite disappointed with Samsung because they didn’t made it to a 12 megapixel camera. Anyway, those are just numbers, the important thing is that the phone will have a much better sensor and picture quality. Anyway, the phone can capture images with no lags and you can even use burst shot. There’s a feature called Best shot in where the phone chooses the best photo on the 8 photos that you got in burst shot. I think it’s a great feature especially for those people who want to have stolen shots hehe. Here are some shots from the Samsung Galaxy S3: 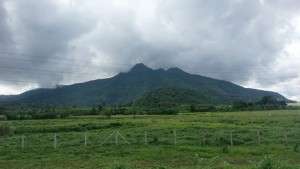 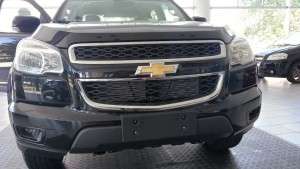 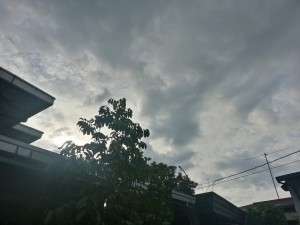 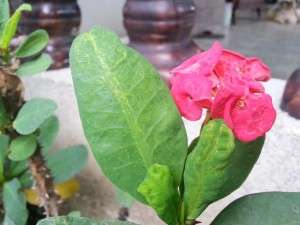 Here’s a HD video sample of the Samsung Galaxy S3:

The Software and Performance 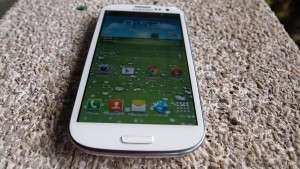 The Samsung Galaxy S3’s tagline is “Designed for Humans, Inspired by Nature. It is really inspired by nature. The new Touchwiz UI is entirely inspired by nature. The wallpapers are all from nature and the lock screen is like touching a clear water. And yeah, I really want to play with that most of the time. Oh and the Samsung Galaxy S3 is available in 2 colors — Marble White and Pebble Blue. Yeah, even the colors was inspired by Nature. Honestly, at first I really didn’t like that Samsung used the inspired by nature thing but after I tried and used the phone for weeks, well yeah. I think they made a good job on that one. Thanks to the quad core processor of the Samsung Galaxy S3, navigating and swiping transitions on the phone is fast. Oh and we’re not on Jelly Bean yet! Surely, when Jelly Bean arrives, there will be a much faster and silky smooth experience on the phone. 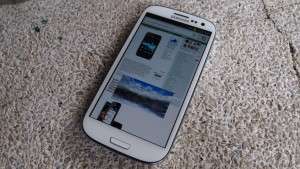 Pop-up Play
For those people who loves to multi-task might find this feature very useful. So if you’re watching Game of thrones and you want to play Temple run or any app that you want to open. No problemo! Because with pop up play, you can watch a video while browsing the web or playing a game. And no, I didn’t experience slowdowns or crashes whenever I use the Pop-up play.

There are a lot of cool new features on the Samsung Galaxy S3 and here’s just one thing that you might like. Direct call is pretty feature exclusive to the Galaxy S3. Basically, when you’re on the contact info or on the threaded text message of the phone, you just need to place the phone on your ear without pressing any key and automatically, the phone will call to that contact. It works 90% of the time. 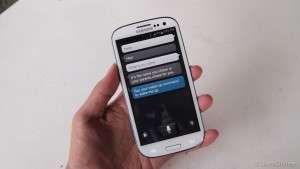 
When the iPhone 4S was launched, one of its notable features of it is Siri so Samsung created their own version of Siri called S Voice. The S voice is base on Vlingo which I think can be found on the Predecessor, the Samsung Galaxy S2. The thing that I like in the S voice is that it can recognize my Batangueno/Tagalog accent but I felt that talking to Siri is much better than talking to the S voice. But hey, I can still command the S voice to send a message for me, set an alarm and many more. 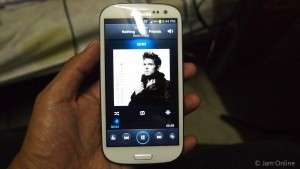 Oh and aside from that, I can also command my Samsung Galaxy S3 to play a music, unlock and open the camera on the lock screen by just placing setting up a wake up command for that. Oh and when you’re on your music player, you can change the music or set the volume down by just saying “next” or “volume up/volume down” 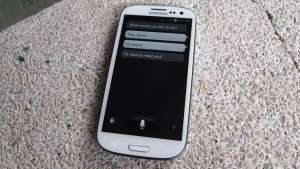 Smart Stay
Smart Stay is just one of the Smart features of the Samsung Galaxy S3. So what does this feature do? Well, the Smart stay can detect your eye whether you’re looking at it or not. And if you’re not looking on the phone, there will be an “eye” icon on the notification bar at the top and the phone automatically dim its brightness. A nifty feature of Samsung Galaxy S3 if you want to save more battery. This feature works most of the time. OH! and Smart stay won’t work if you’re on a low light environment. 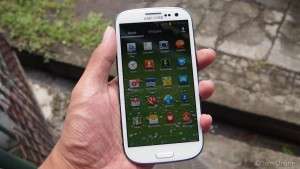 Some other cool stuffs

For those people who didn’t know yet, the Samsung Galaxy S3 comes with a free 2 year 48 GB free storage on Dropbox. So all in all, you can get a 50 GB of free cloud storage. You just need to finish some steps or you can just receive an email to activate the free 48 GB storage. But I’m not really a fan of Dropbox because I always use my Skydrive which has 25GB of storage for old users. Too bad, there’s no official app of Skydrive on the Android.

There are also some special motion and gestures that you can use on the phone like placing the palm on the phone while you’re on the music player will automatically pause the music player. There is also a feature called the Smart Alert. So basically Smart alert will notify you about missed calls and messages when you get your phone after placing it down. The phone will vibrate to notify you that you have new messages and other notifications. 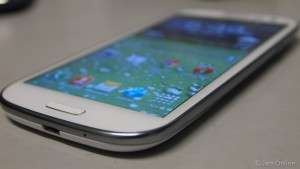 The Verdict
Let me get this straight guys, the Samsung Galaxy S3 is the best Android phone right now. It’s features are really good even though some of them are not really useful in our everyday routine but hey, the 4.8″ HD Super AMOLED display and the quad core processor is a monster. Some people say that this phone is too simple and ugly but I assure guys that once you’ve tried this phone, you might change your outlook with the Samsung Galaxy S3. We don’t have Android 4.1 Jelly bean update yet but surely, Samsung will have a Jelly bean update for the Samsung Galaxy S3 very very soon. So if you want to get one from Globe, it’s available for Plan 1699. It’s available in 2 colors — Marble white and pebble blue 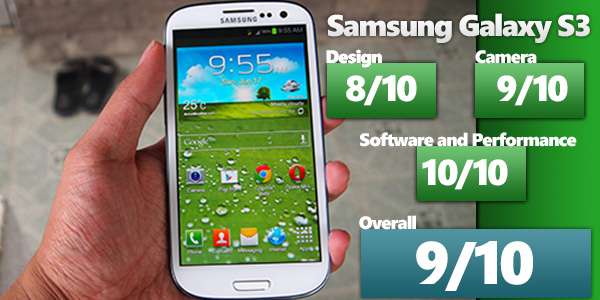